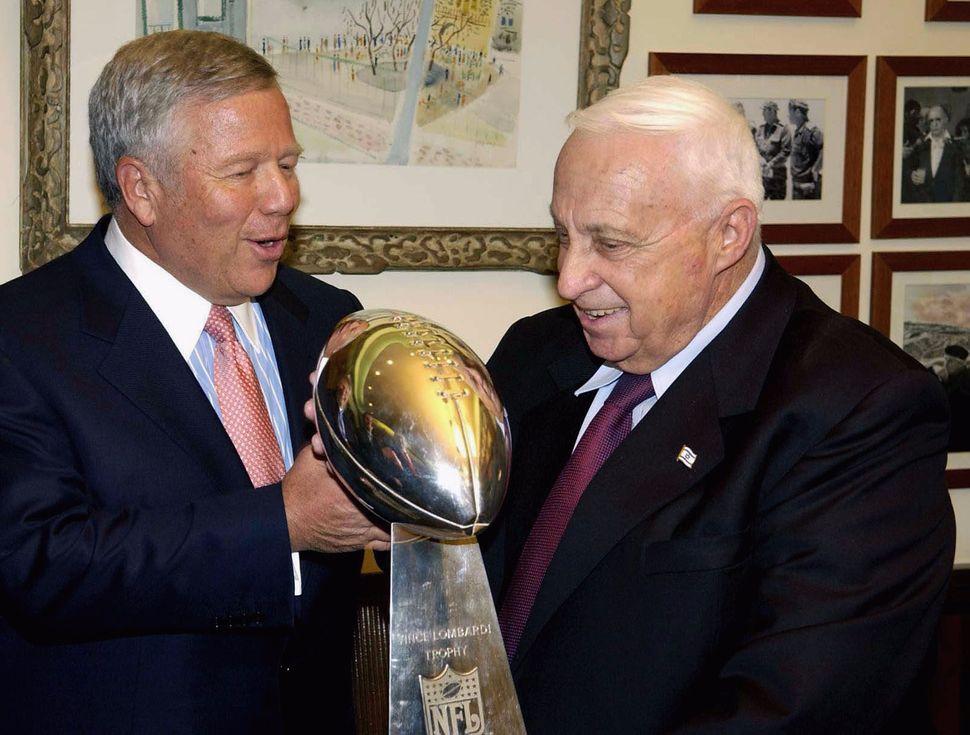 E ditor’s note: With the New England Patriots back in the Super Bowl, we are revisiting last year’s interview with Patriots owner Robert Kraft. This article was originally published on February 1, 2017, days before the Patriots defeated the Atlanta Falcons.

What do preparing for the Super Bowl and rabbinic literature have in common? More than you would think, according to New England Patriots owner Robert Kraft.

As Tom Brady and company get ready to face the Atlanta Falcons in the Super Bowl on Sunday, February 5, Kraft spoke with the Forward about his religious upbringing, his relationship with Israel, and what it takes to prepare for the biggest stage in one of the most complicated, strategic sports.

“We try to prepare very hard, study very hard,” said Kraft, who grew up in a strictly observant Jewish home and studied Pirkei Avot — Ethics of our Fathers — every Saturday afternoon with his father. “You know, it’s like studying Talmud or Torah — it’s not just simplistic, it’s deep. We prepare as a team very well, we practice hard.”

That rigorous attention to detail is one reason that the Patriots are preparing to play in a record eighth Super Bowl since Kraft, a Brookline, Massachusetts, native, purchased the team in 1994.

The other key to New England’s success is the team’s culture – an aura often referred to as the “Patriot Way.” Under Kraft and head coach Bill Belichick, the organizational philosophy has been that the team is greater than the sum of its parts; everyone from the superstar quarterback to the benchwarmer is held accountable.

Kraft used the word “team” three times in one sentence, and he unwittingly did so again a few minutes later when talking about Israel. Without explicitly referencing the “Patriot Way,” Kraft credited a similar check-your-ego-at-the-door, team-first mentality for the State of Israel’s ability to thrive in a hostile region.

“That whole concept of team and teamwork and team first — that’s how Israel, in my opinion, has survived in the Middle East,” he said. “Everyone has different opinions, and everyone is a hakham [a wise man], except in times of stress and, unfortunately, war, where everyone bands together and puts the team first.”

The Kraft family’s relationship with Israel is well documented. Over the years, Robert Kraft has taken dozens of players, coaches and friends on yearly trips to a country that he called a “modern-day miracle.” In 2006 he took Brady to an Israel Defense Forces firing range. On another visit, he brought along the Vince Lombardi Trophy, stopping by then-Prime Minister Ariel Sharon’s office for a photo shoot. Two years ago, 19 members of the Pro Football Hall of Fame made the journey.

“They came back to America and explained that it was the greatest experience of their life,” Kraft said of the Hall of Famers. “Some of them were men that had won Super Bowls, and they said that being baptized in the Sea of Galilee or visiting the Church of the Holy Sepulchre changed their life.”

Kraft and his late wife, Myra Hiatt Kraft, have also done more than anyone to bring the American game over to Israel. The couple have supported and funded a women’s flag football league. In Jerusalem, American football is played at the Kraft Family Stadium.

He acknowledged that soccer and basketball are more popular, but he believes that football will catch on. “We think that once Israelis understand the game, they’ll be big supporters of it,” Kraft said.

In the meantime, the New England-Atlanta matchup marks the first time since 2012 that two teams with Jewish owners have met in the Super Bowl. The four-time Super Bowl champion downplayed the Jewish connection, but said that Falcons owner Arthur Blank is “like a brother.”

“He’s a very good friend,” Kraft said. “Only one of us is going to win next Sunday, but I have great respect and affection for him.”