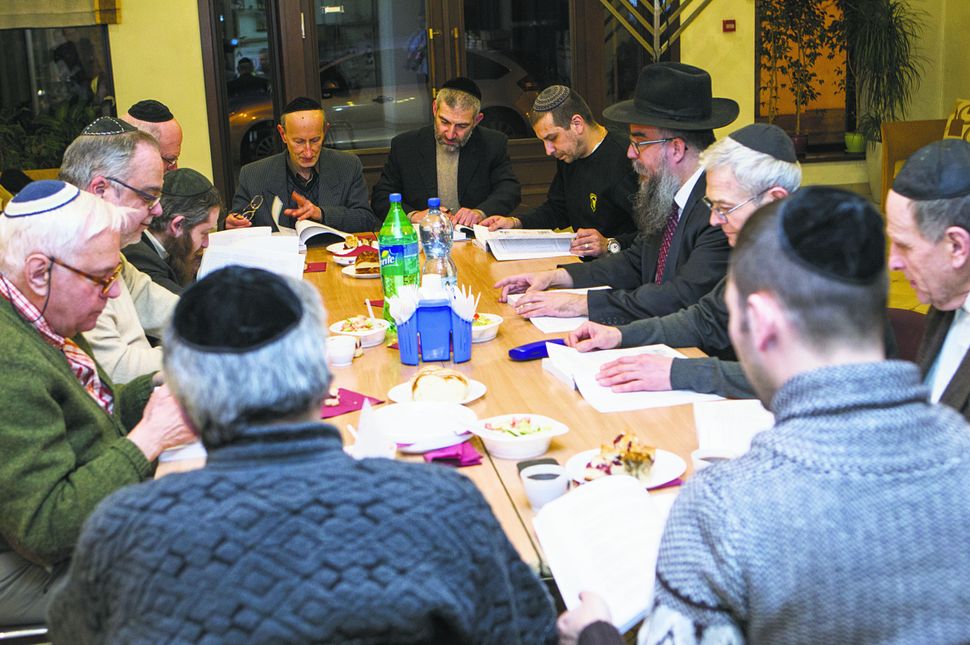 But the Lithuanian government’s payment of $40 million to the country’s small Jewish community has reopened a decades-long dispute between Lithuania’s Jewish leadership and a Chabad rabbi from Boston.

Arguments over the money have swelled into a debate about who better represents Lithuanian Jewry — a Hasidic rabbi from America, or a native community among whom identity is more important than religious observance.

Rabbi Sholom Ber Krinsky, the 49-year-old nephew of an influential Lubavitch Hasidic leader, claims that after living in Lithuania’s capital, Vilnius (formerly Vilna), for 22 years and serving the country’s Jewish community — running a religious school, overnight camps and holiday events, and presiding over circumcisions, bar mitzvahs and weddings — he is entitled to a portion of the restitution money.

On a blog that he launched late last year attacking his opponents’ “underhandedness,” Krinsky argues that he has done “the vast majority of religious Jewish work throughout Lithuania for the past two decades.” But the Jewish community’s lay leader, he charges, is using Soviet-era methods to shut him out of the restitution process and is herself misspending the money.

Faina Kukliansky, the lay leader whom Krinsky targets, says her community’s finances are transparent. Following several requests from the Forward, she provided a full accounting of the group’s budget for last year as well as for the year ahead.

But she has not been as forthcoming to Krinsky. who launched an online petition in January, demanding restitution money for his group’s projects.

So far, the petition has gained more than 1,700 signatures, mostly from Jews outside Lithuania. But Kukliansky says that the main impact has been to damage the Lithuanian Jewish community and its public image.

In her battles against Krinsky, Kukliansky has reached back 250 years into Lithuanian history, pointing out that the Vilna Gaon, perhaps Vilna’s most renowned rabbinic leader and scholar, was one of the earliest and most prominent opponents of Hasidism.

Krinsky, however, says that Hasidim and Litvaks, as the country’s non-Hasidic Orthodox adherents became known, have worked in tandem for generations. He also criticizes the international Jewish communal body charged with disbursing the money — known as the Good Will Foundation — for financing secular activities that are “the antithesis of everything that is dear and holy not only to true Litvak Jewry and the Vilna Gaon, but to all G-d fearing Jews globally.”

In recent months, Kukliansky has hired security guards to bar the Lubavitch rabbi and his followers from entering the city’s Jewish community center, reviving memories of a fistfight that broke out in Vilnius’s only synagogue in 2004 between Krinsky’s supporters and followers of the community’s rabbi.

It was only in July 2011, after almost 10 years of wrangling, that the Lithuanian government began paying restitution for Jewish communal properties that were first seized by the Nazis and then nationalized by the post-World War II Soviet government. The government committed to 37 million euros — about $40 million — to be paid over a decade.

Rabbi Andrew Baker, who helped lead restitution negotiations on behalf of the World Jewish Restitution Organization, said the government insisted on strict oversight of disbursements and that the funds be used primarily for projects inside Lithuania. The money was to be paid beginning in 2014. Of the roughly $3.9 million the Good Will Foundation receives annually, half is put toward an endowment and the remainder is divided between the Lithuanian Jewish community and funding for special projects by outside groups.

By such a measure, Krinsky is entitled to the money.

But Baker, who co-chairs the Good Will Foundation alongside Kukliansky, said that the group withheld funds because of Krinsky’s questionable operating methods and finances.

Initially, Baker said, a $43,000 grant for school computer equipment fell through because Krinsky declined to provide the foundation with details and documentation about the program.

Then, a government bailiff informed the foundation that money granted to Krinsky’s operations would be garnished to repay $108,000 that Krinsky owes in tax and social security debts.

Baker and Kukliansky say they cannot use restitution money to fund Krinsky’s debts.

“What I’ve said to him is, find a way to take care of your own tax debt,” Baker said. “Bring in an outside auditor to show us you are operating properly, and then we can talk.”

Before World War II, Lithuania, with an estimated Jewish population of 200,000, was renowned as a center of Eastern European Jewish life and culture. But about 95% of Lithuania’s Jewish population was murdered during the war, often with the help of Lithuanian paramilitary units working under the Nazis. Today, the Baltic state, which borders Poland, Latvia and Belarus, is home to about 6,000 Jews.

The Good Will Foundation lists on its website the projects it funds. Most of the expenditures are nonreligious, such as co-sponsoring a visit by an Israeli youth sports team, or contributing toward an effort to digitize the YIVO Institute for Jewish Research’s prewar library and archival collections, the majority of which remains located in Vilnius.

Krinsky criticizes these secular special projects as “the antithesis of what restitution funds from Jewish religious communal property should be used for.”

But Krinsky’s biggest complaint is transparency.

Although the foundation itemizes funding for the special projects on its website, it does not show how the Lithuanian Jewish community spends about $1.3 million annually. Krinsky claims that some of this money is being used to pay out “secret scholarships.”

“There are no secrets,” Kukliansky said.

But after a reporter was unable to locate the budget on the community’s website, Kukliansky said she was mistaken. A community official subsequently sent a link to a document, in Lithuanian, showing the budget for 2016, as well as a hard copy of the budget for 2017, in English, that included last year’s spending.

The English-language budget provides details on the amount of Good Will funding assigned to each community project, from social welfare services to educational, cultural and religious programs. As detailed as the budget is, some programs, such as the scholarships Krinsky is skeptical about, are folded into a broad range of activities, including “media,” “education” and “participation in international Jewish events,” leaving it unclear how much money is spent on the scholarships and how many people receive the money.

Looking back over his 22 years in Lithuania, Krinsky sees a pattern.

He believes that the communal leadership used him during the 1990s as a religious figurehead to help with their restitution claims, and once those claims were on track he was ostracized to ensure that he received none of the funds.

Kuliansky sees a pattern, too. This latest episode, she says, is part of a long struggle by Krinsky to establish himself as the chief rabbi of Lithuania.

Krinsky is not the only person demanding a share in the restitution funds, she noted. People from America, Israel and other countries have contacted the Lithuanian government, asserting claims.

“There is money, and a lot of people who want to get it,” Kukliansky said. “It makes our life very difficult.”