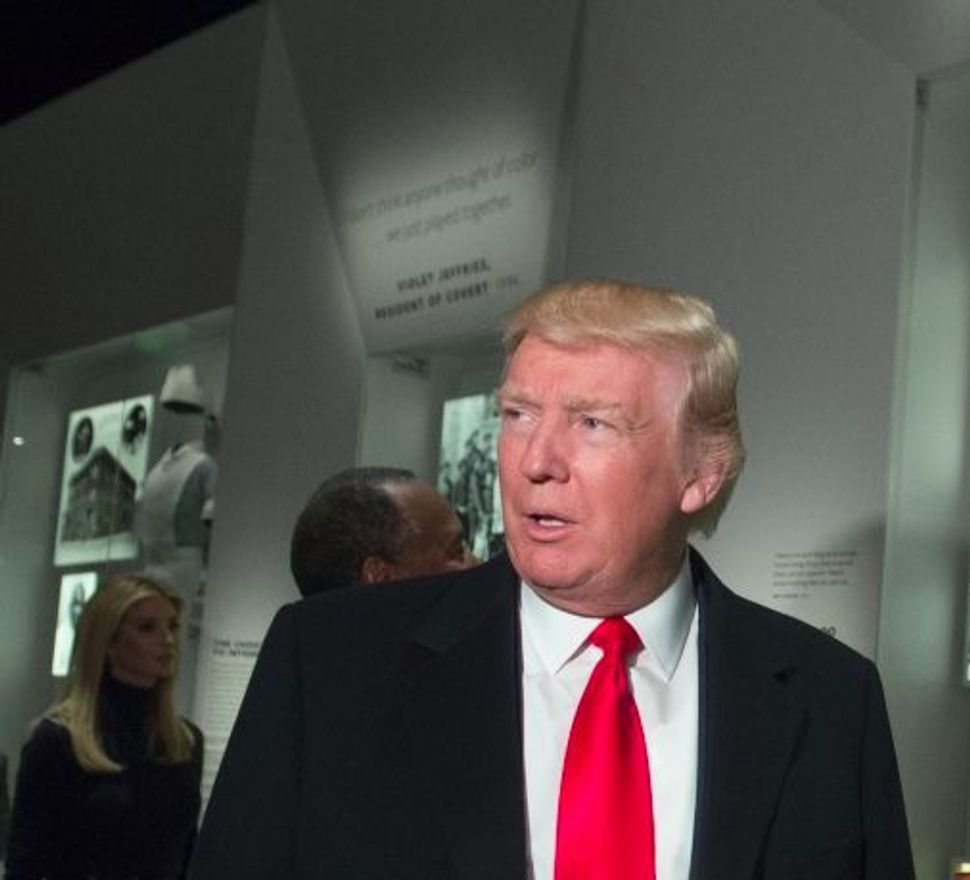 President Donald Trump delivered his first public condemnation of anti-Semitic incidents in the United States on Tuesday after a new spate of bomb threats to Jewish community centers around the country and massive vandalism in a Jewish cemetery.

Several of the centers were evacuated for a time on Monday after receiving the threats, the JCC Association of North America said. Also, vandals toppled scores of headstones at the Chesed Shel Emeth Society cemetery in St. Louis, Missouri over the weekend.

“The anti-Semitic threats targeting our Jewish community and community centers are horrible and are painful and a very sad reminder of the work that still must be done to root out hate and prejudice and evil,” Trump told reporters.

He was speaking at the end of a tour of the National Museum of African American History and Culture in Washington, which Trump said showed “why we have to fight bigotry, intolerance and hatred in all of its very ugly forms.”

The comments marked a change for Trump, who had not explicitly and publicly condemned the threats against Jews when asked last week. Instead, he spoke more generally about his hopes of making the nation less “divided.”

Trump’s daughter, Ivanka, a convert to Judaism and a close adviser to her father, responded to the latest threats in a message on her Twitter account on Monday evening.

“America is a nation built on the principle of religious tolerance,” she said. “We must protect our houses of worship & religious centers.”

The president reacted with anger at a news conference last week when a journalist from a Jewish magazine asked how his government planned to “take care” of a rise in threats.

Trump berated the reporter for asking a “very insulting” question, appearing to believe he was accusing him personally of being anti-Semitic.

“Number one, I am the least anti-Semitic person that you’ve ever seen in your entire life,” the president said, adding that he was also the least racist person. Trump has often noted that his daughter is a convert to Judaism, he has Jewish grandchildren and he employs many Jews in his business.

On Tuesday, Trump again declined to answer a question about what action he would take to address the threats to Jewish organizations.

Trump has disavowed their support. His chief strategist, Steve Bannon, is the former publisher of Breitbart, a news website popular among right-wing extremist groups.

The Anne Frank Center for Mutual Respect in New York, which has criticized the Trump administration repeatedly over anti-Semitism, said his comments were too little too late.

“The president’s sudden acknowledgement is a BAND-AID on the cancer of anti-Semitism that has infected his own administration,” Steven Goldstein, the group’s executive director, said in a statement.

Jewish groups criticized the White House for omitting any mention of Jews in its statement marking Holocaust Memorial Day last month. The White House said the omission was deliberate since the Nazis also killed people who were not Jews, if in smaller numbers. The stated goal of the Nazis was the extermination of Jews.

One day after speaking at a security summit in Munich, U.S. Vice President Mike Pence spent Sunday morning walking through the grounds of the Dachau concentration camp in Germany with a survivor, Abba Naor.

On Monday, bomb threats were called in to 11 Jewish community centers, including ones the Houston, Chicago and Milwaukee areas, according to the JCC Association of North America. They were found to be hoaxes.

No arrests were made. The FBI has said it is investigating recent threats as “possible civil rights violations.”

The incidents on Monday followed three waves of bomb threats so far this year. In all, 69 incidents at 54 Jewish community centers in 27 states and one Canadian province have been reported, according to the JCC association.—Reuters