Pulling No Punches In Fight Against ‘Alt-Right’ And Neo-Nazis 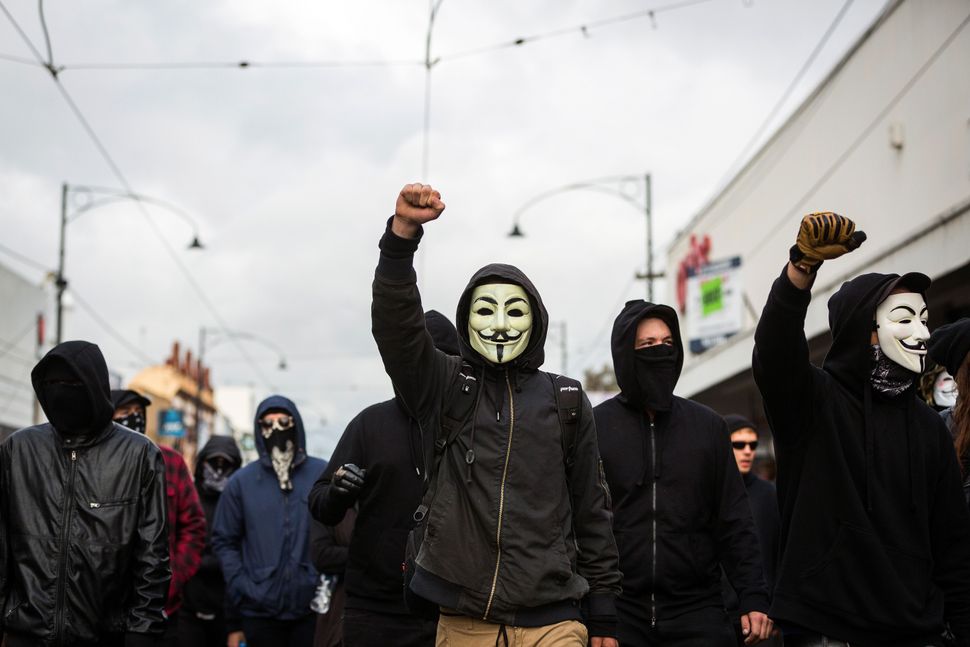 How do you punch a Nazi in Yiddish?

Maybe deliver a khsime, or “signature,” as in putting a “signature on someone’s face.” Or give them a shmir, an open-handed smack to the face, like lathering schmear on a bagel. Or maybe it takes der gubernator, “the governor,” jabbing your thumb into a person’s ribcage.

Obscure? To be sure. But you might find yourself becoming more familiar with such terms, if a growing number of Jewish “antifa” activists have their way.

In response to an energized American white nationalism, some Jews are gravitating toward “anti-fascist” activism. They’re embracing the idea that the best way to combat your enemies — in this case, white supremacists — is through direct confrontation, even violence. Organizers say their members number in the thousands. Though on-the-ground organizing on that scale has yet to materialize, one recent protest attended by many Jewish anti-fascists drew hundreds, and organizers say they are planning more actions.

At the same time, they are celebrating their Jewish identity. Those Yiddish fighting words are a good example.

Activists who call themselves “antifa,” short for anti-fascists, are inspired by early 20th-century responses to European fascism. They say they are influenced by militant left-wing and anarchist politics. 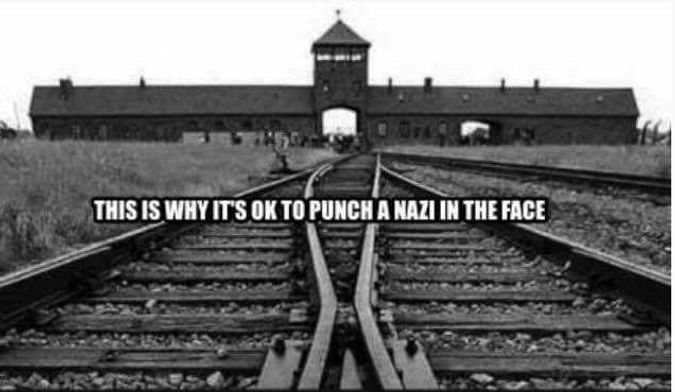 A graphic shared by the Jewish Antifa Facebook page presents the German camp of Auschwitz as a justification for why “it’s OK to punch a Nazi in the face.” Image by Facebook

A handful of loosely organized groups have cropped up to confront white nationalism online. There is the “Jewish Antifa” Facebook page, which promotes the Jewish history of confrontational protest (this is where the string of Yiddish punch descriptors appeared). Then there is the allied group “MuJew Antifa,” a collaboration between Muslim and Jewish activists. And there are dozens of other individuals who are active from their own social media accounts.

The Jewish Antifa page has fewer than 60 members, but the MuJu Antifa network boasts more than 2,000, one organizer said. Jews who identify as anti-facists could also be involved in groups like Black Lives Matter or other left-wing Jewish groups without belonging to one of these two antifa groups.

One “MuJu” event last month brought a couple hundred people into the street to protest President Trump’s immigration ban. Activists marched down the street in Manhattan, carrying signs against Trump and chanting in Yiddish.

“We’re seeing an increase in far-right activity — the activity of people identifying as white supremacists and even Nazis,” said activist Michael Gould-Wartofsky, who is also the author of the 2015 book “The Occupiers: The Making of the 99 Percent Movement.”

Gould-Wartofsky said there are a range of opinions on tactics among Jews who might call themselves antifa: “With a massive rise in the climate of violence, some people [say] that it takes confrontation to combat far-right activity.”

There is a growing interest in learning physical self-defense among Jewish activists, Gould-Wartofsky said, adding, “People want to have the skills necessary to defend their community and other communities that are also under attack.”

‘Some Groups Are Naive’

This activism marks a sharp break with mainline Jewish organizations such as the Anti-Defamation League. While the ADL has for decades monitored and advocated against anti-Semitism, it does not encourage confronting groups such as white supremacists head-on, nor does it do so itself. 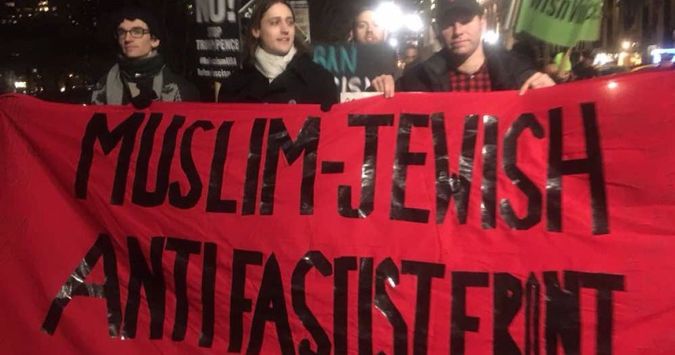 A gathering of Muslim and Jewish antifa activists in New York City in the weeks after President Donald Trump’s inaguration. Image by Facebook

Some antifa activists think that’s exactly what it takes.

For example, when a masked antifa activist dramatically clobbered “alt-right” figurehead Richard Spencer, the image sparked debate — but it was celebrated widely in more left-wing circles as a direct repudiation of mainstream liberalism.

“I disagree with liberal tactics,” Bethany “Benny” Koval, a New Jersey-based activist, wrote in an email to the Forward. “Some groups are naive enough to believe that if we display the nude white supremacist onstage, the crowd will simply laugh him away.”

In the eyes of these Jewish antifa activists, mainstream advocacy groups need to do more than condemn far right-wing groups like the “alt-right.” 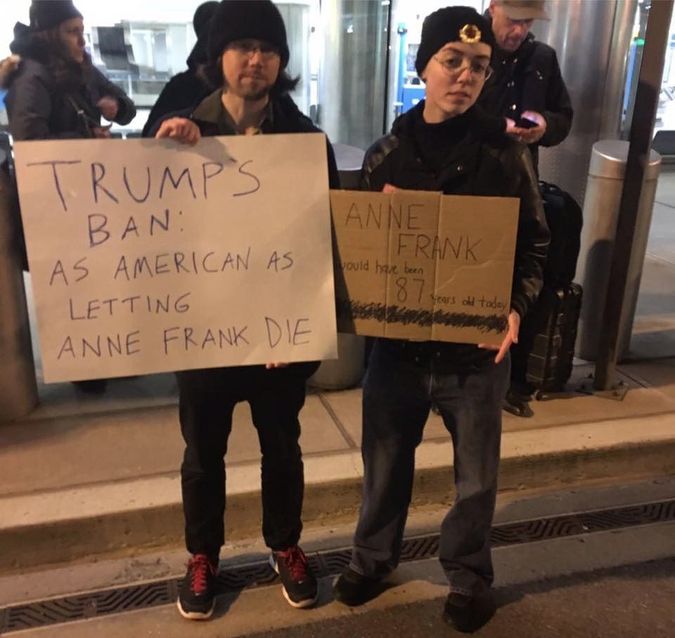 Benny Koval, at right, is one of a handful of Jews who identify as antifa activists. At a protest against President Trump’s travel ban, she carries sign commemorating Anne Frank. Image by Twitter

“The purpose of these groups is to condemn hate and violence,” Raphael Dreyfuss, a Los Angeles-based activist, wrote in a message to the Forward. “But the thing about Nazis is, they don’t care if they’re being condemned. You can condemn and condemn and condemn until you’re being marched towards a gas chamber — they don’t give a damn.”

The best way to confront?

At left, a traditional antifa emblem. At right, a Jewish take, by a team of illustrators known as “Golem For You” — featuring a golem, a Star of David and a biblical call to justice.

For these antifa groups, their activism is an affirmation of Jewish identity — both religious and secular.

“Many of us take inspiration from Bundism and the explosion of secular Yiddish socialism that happened at the turn of the century,” Dreyfuss said, “but many are also inspired by their spirituality.”

Bundism was a secular, non-Zionist Jewish movement that was founded in the Russian Empire in 1897 and sought to organize the working-class Jews of Russia, Poland and Lithuania.

In a widely circulated meme, one activist offers a particularly Jewish spin on an antifa emblem.

The logo traditionally reads “Good night white pride” and pictures a neo-Nazi being kicked to the ground.

But the new Jewish version reads “Good night alt-right,” and pictures a Star of David; a cartoon golem, the vengeful creature of Jewish folklore — and a biblical reference from Deuteronomy: “Tzedek, tzedek, tirdof” or “Justice, justice, you shall pursue.”

Pulling No Punches In Fight Against ‘Alt-Right’ And Neo-Nazis