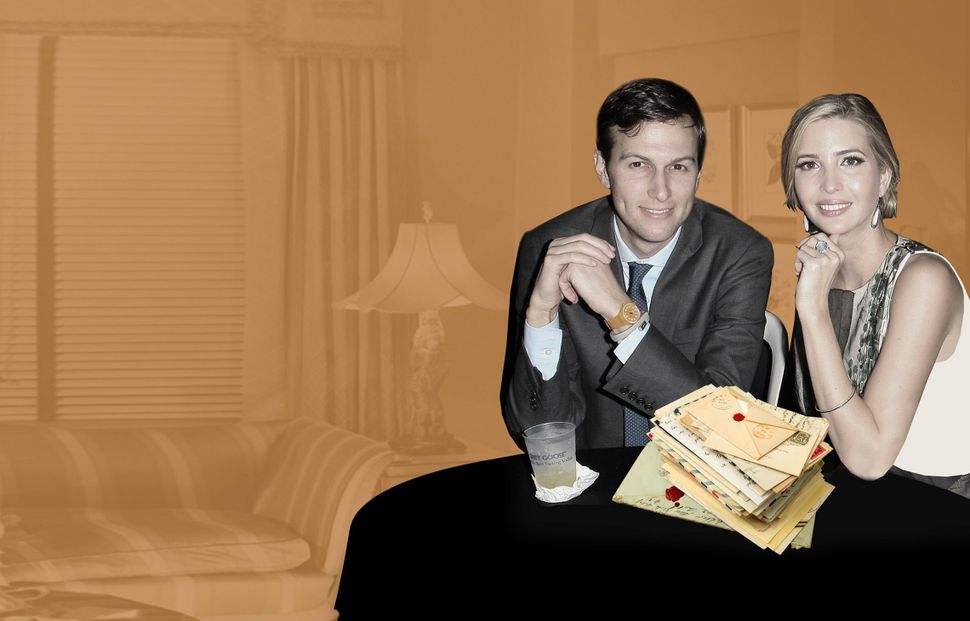 Jared Kushner and Ivanka Trump are the glamorous Jewish power couple of the Trump White House. Ivanka the picture-perfect daughter of the president is a life-style guru, fashion retailer and Jew-by-choice. Husband Jared, raised Orthodox, now a trusted member of the Trump inner circle, is himself the son of a billionaire real estate developer Charles Kushner.

We asked the pair to answer our readers’ questions, and they agreed graciously — as they do everything!

Dear Ivanka,
As a Jew, I’m very nervous about the people that your father has gathere daround himself – people like Steve Bannon, who ran the often anti-Semitic Breitbart News and has reportedly said he doesn’t like Jews, and Sebastian Gorka who wears medals of Nazi allies and has ties to anti-Semitic Hungarian groups. If these are the people your father trusts, how can we trust him?
Nervous In Newton, Mass.

Dear Nervous,
What a silly question – my father loves Jews!
I mean, I’m Jewish, and he loves me more than anybody, including my siblings — he announces it to the family every Thanksgiving. Plus he always says Jared and my children are going to be the best negotiators!
And it’s not just family – his doctor is Jewish, and so are his lawyers, his accountants, and his other lawyers. He loves us Jews for our shrewd business dealings, our control of various media outlets, and our innate cunning.
Obviously there are some Jews he doesn’t like, such as the ones who work at the New York Times and the Washington Post and Nordstrom. But he likes good Jews. So just be a good Jew and you’ll be fine.
Ivanka

Dear Jared,
My wife says that as a historically oppressed minority, we Jews have an obligation to fight for a just society that protects the rights of all minorities, Jews included. But I think we need to look out for ourselves — if Donald sees we support him then he’ll take care of us.
What do you think?
Self-Interested In Santa Monica, Ca.

Dear Self-Interested,
I hear a lot of kvetching about how Steve Bannon and his white nationalist followers are “coming for” the Jews, but that’s just silly. I’ve been in on these discussions, and while I can’t break confidence, suffice it to say there’s a long list of groups ahead of us – first they’ll come for the Muslims, then the Hispanics, Blacks, and so forth. I can assure you, we’re way down the list.
As long as we say nothing, we should be fine.
Jared

Dear Ivanka,
You and Jared are under the media microscope all the time, but you seem so happy together. How do you make it work?
Curious In Kenosha, Wisc.

Dear Curious,
The key thing is to find someone who really gets you where you’re coming from. For us, it’s all about family.
Jared’s dad is a high-powered guy, just like mine. For example, Jared’s dad (who is the son of Holocaust survivors) had his brother-in-law set up with a prostitute and secretly taped him at a motel, then sent the tape to the rest of the family. That might sound pathological to some people, but I got that right away – Charles was just being a tough negotiator.
And Jared is wonderfully sensitive with my dad. Like when my dad is upset, Jared has this special way of being utterly unemotional and just repeating over and over, in a monotone, “Calm down.” It really works.
Finally, it helps when you and your partner want the same things. Jared and I both want to raise a good family, pursue meaningful work, and accumulate immense wealth and power.
Ivanka

Dear Ivanka,
You look tremendous. Even after having three kids – doesn’t show! How do you do it? What are your measurements? Gorgeous!
Secret Admirer In Washington D.C.

Next week The Backward will be entirely dedicated to a discussion of whether the media spends too long obsessing over the Trump/Kushner families. With in-depth interviews with people who know them, and long-time companions and, as always, in plush glossy color, The Backward: First Family will provide an unmissable debate.