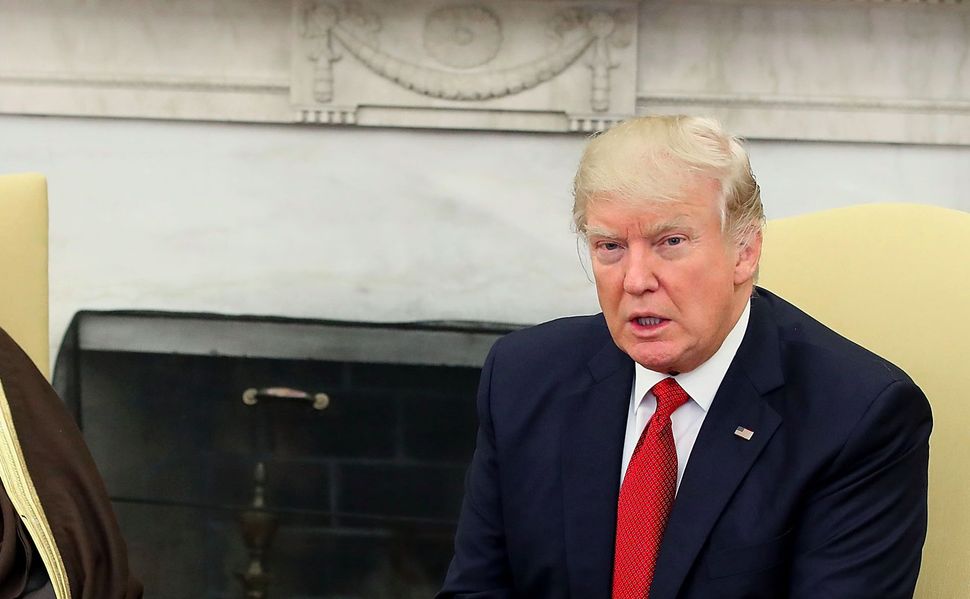 WASHINGTON (JTA) — Trump administration rhetoric about Israeli-Palestinian peace is typical of a president who would make everything great: President Donald Trump is going to bring about a “historic” deal, the White House has said, one that would “reverberate positively throughout the region and the world.”

What isn’t typical, at least for a president who has shattered conventions in so many other sectors, is how typically Trump is going about reviving talks.

Jason Greenblatt, a real estate lawyer and trusted longtime adviser to Trump, is in the region drumming up interests in new talks, and he’s partying like its 1989:

Except for the hyperbole, the statements emerging from Greenblatt’s “listening” tour of the region this week could have been lifted from boilerplate dating back to the administration of George H. W. Bush, the first president to get Israelis and Palestinians into the same room, and through his successors, including Bill Clinton, Bush’s son, and (gasp!) Barack Obama.

“I have a lot of differences with this administration on a lot of issues, but on the issue of Israel and Palestinians they have been probably more cautious and more responsible than on an almost any other issue,” Daniel Shapiro, who was the Obama administration envoy to the region from 2011 until January, said in an interview.

“It’s striking to hear quite similar language in describing their approach, their goals, their understanding of the relationship between the issue of settlements and prospects for success in negotiations,” said Shapiro, who is currently a senior visiting fellow at Israel’s Institute for National Security Studies.

Trump’s pro-Israel supporters hailed his election as an opportunity to reset the relationship between the two countries; Israel’s right crowed after his victory, with Education Minister Naftali Bennett saying it was a chance for Israel to “retract the notion of a Palestinian state.”

Settlements were a key bone of contention between the Obama administration and Prime Minister Benjamin Netanyahu’s government, culminating in December when the U.S. allowed the U.N. Security Council to pass an anti-settlements resolution.

Nothing quite so contentious has emerged yet in the Trump-Netanyahu relationship, but it hasn’t disappeared, either. Trump straight out asked Netanyahu to hold off on settlement building for a while when they met at a White House summit last month, and Greenblatt raised the issue in his five-hour meeting Monday with Netanyahu.

“With respect to settlements, we see them as a challenge that needs to be addressed at some point,” Marc Toner, the State Department spokesman, said this week.

Other differences in tone and emphasis are emerging between the Trump and Netanyahu governments.

Notably, Netanyahu — who has made no secret of his preference for Trump over Obama – has spent the three years since the collapse of the last round of talks saying Abbas appears anything but committed to advancing peace.

Jewish officials who favor the new administration’s Israel posture say they see a difference in how Trump and his team emphasize the need for Abbas to tamp down Palestinian incitement, particularly the payments the Palestinian Authority hands out to families of imprisoned or killed terrorists.

“President Abbas committed to preventing inflammatory rhetoric and incitement,” said the U.S. readout of the meeting with Greenblatt.

But the notion that Obama downplayed incitement was always something of a myth; Obama and his top officials repeatedly decried incitement, as recently as his farewell speech to the United Nations in September. Those calls, however, tended to receive less media coverage than his tensions with Netanyahu.

There are some differences of tone – most dramatically, in how Trump has retreated from explicitly endorsing the two-state solution.

Danielle Pletka, the vice-president of the American Enterprise Institute, said that should be seen less as a rejection of the two-state outcome than a means of returning the ball to the court of the Israelis and the Palestinians.

The Obama administration grated on Israel by prescribing the outlines of the two states – although even that pressure had diminished after the last round of talks collapsed in 2014.

Pletka said one reason for the lack of surprises from Trump on the Middle East was his focus on other areas of security and foreign policy, where he is bringing about real and dramatic change, including limiting the intake of immigrants and refugees, pulling out of multilateral trade deals, recalibrating ties with China, and raising the stakes in the fight with the Islamic State.

“Those are issues he deeply cares about,” she said. Another factor was the administration’s slowness in filling second and third tier jobs in national security and foreign policy, which would inhibit the advancement of dramatic policy changes.

Shapiro said Trump and his team were learning that ideological postures taken during a campaign bang up against reality after the election.

Combating incitement, limiting settlement expansion, seeking a broader buy-in to peace by Israel’s Sunni Arab neighbors, and advancing two states “are structural U.S. interests, they are not ideological fixations of one administration or another, one that any administration interested in U.S. interests in the region will coalesce around,” said Shapiro.

Tamara Cofman Wittes, who directs the Brookings Institution’s Center for Middle East Policy, said Trump – who is meeting with an array of Arab leaders in coming weeks – is seeking Arab investment in his bid to crush the Islamic State.

“Every administration comes into office, they confront the array of American interests and partners in the Middle East, and it makes it hard for them to do what they want to do if Arab-Israeli conflict is at risk of becoming an Arab-Israeli conflagration,” said Wittes, who was a senior Middle East policy official in Obama’s first term.

“One of the things Arabs always ask a new administration is ‘Please avoid doing things on the Arab-Israeli issue – and tell the Israelis not to do things — that would create a crisis,’” she said. “That, which would be a normal thing for Arab governments to do, is magnified by the anti-ISIS imperative,” she said, using an acronym for Islamic State.

Jeff Ballabon, a Republican with deep ties in the Orthodox Jewish community who advocated for Trump, said the narrative of same-old, same-old was deceptive.

“I have tremendous faith in the president as a negotiating prodigy,” he said, referring to Trump’s decades as a real estate deal-maker. “They clearly have America’s and Israel’s best interests at heart. We finally have a team that’s realistic and isn’t beholden to any failed past policies.”