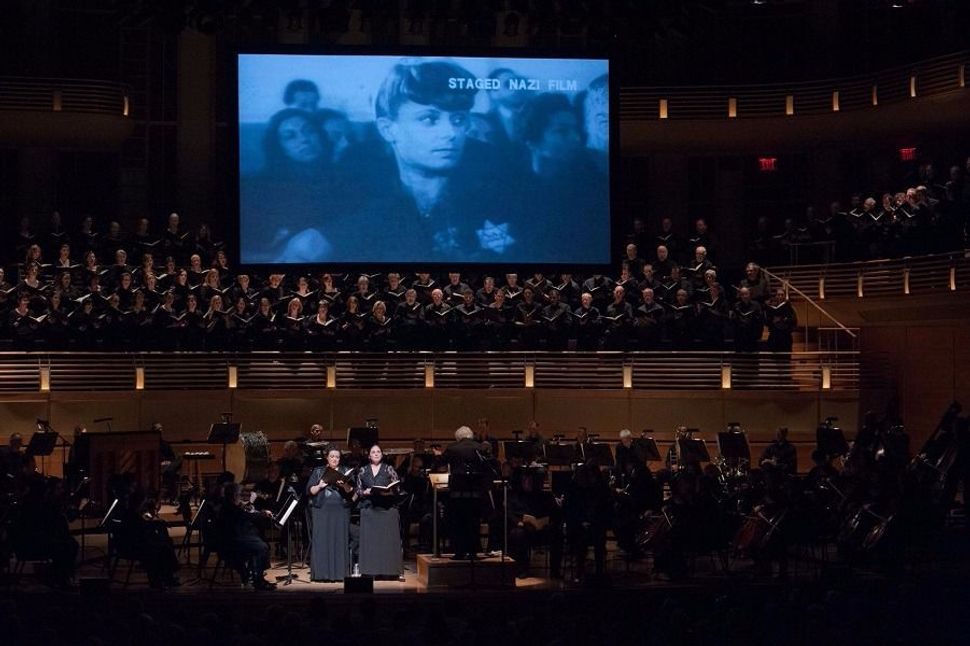 “Defiant Requiem: Verdi at Terezin” came to Chicago last night for a one-night benefit for Holocaust Community Services, a program that takes care of the 6,000 Holocaust survivors still living in the Chicago area. Before an audience of donors and 300 survivors, Murry Sidlin conducted the Chicago Philharmonic and the Chicago Vocal Artists Ensemble through a two-hour program that used music to tell a remarkable Holocaust story.

In 1943, Rafael Schächter, an inmate at the Terezin concentration camp in Czechoslovakia, organized a choir of 150 prisoners and taught them Verdi’s elaborate “Requiem” entirely by rote, using a single copy of the Latin libretto and score that had been smuggled into the camp. They performed the piece 16 times in 1943 and 1944, the final time before a Red Cross committee that had come to inspect the camp. Through the music, the prisoners tried to convey the horrors of life at Terezin, but they were no match for the Nazi propaganda machine, which worked hard to stage what was ultimately a convincing illusion of a model ghetto.

Sidlin and actors Tovah Feldshuh and Peter Riegert told this story between movements of the “Requiem,” assisted by filmed interviews with survivors who had sung in Schächter’s choir and, chillingly, a Nazi-produced documentary about the camp that appears virtually indistinguishable from American home movies from Catskills summer camps during the same period. Everyone who appeared in close-up, Sidlin reported, “disappeared” after the film was made, sent on to Auschwitz or other death camps. Schächter himself was deported shortly after the Red Cross performance; he died on a death march in 1945, just a month before Czechoslovakia was liberated by the Allies.

As the performers streamed offstage while a lone violin continued to play the hymn “Oseh Shalom Bimromav,” there was audible sobbing throughout Symphony Center.

This past Sunday, March 19, Forward editor Jane Eisner came to Chicago to deliver a speech on what it means to be a Jew in Donald Trump’s America at a JUF fundraising brunch at Am Yisrael Conservative Congregation in north suburban Northfield.

In her talk, Eisner identified three major challenges American Jews have faced since November 9: first, the fact that the values of Trump and his supporters are antithetical to those of most liberal American Jews (that is, most American Jews); second, the rise of anti-Semitism across the country from both the left and the right; and third, the growing schism between the Orthodox population, which largely voted for Trump, and everyone else.

“Jews are on the outside again,” she said, “and maybe that’s good. I believe in Judaism’s counter-cultural message. There’s rampant American individualism, but Judaism constantly asks us to do for others. Our new vulnerability makes compassion a moral duty.”

Also this week, Forbes magazine named Cubs president Theo Epstein the world’s greatest leader. Not just in baseball—in leading in general. What other leader has had to deal with an organization as spiritually tied to failure as the Cubs? In a text message to the Tribune, Epstein said the whole thing was “absurd” and that “I can’t even get my dog to stop peeing in the house.”