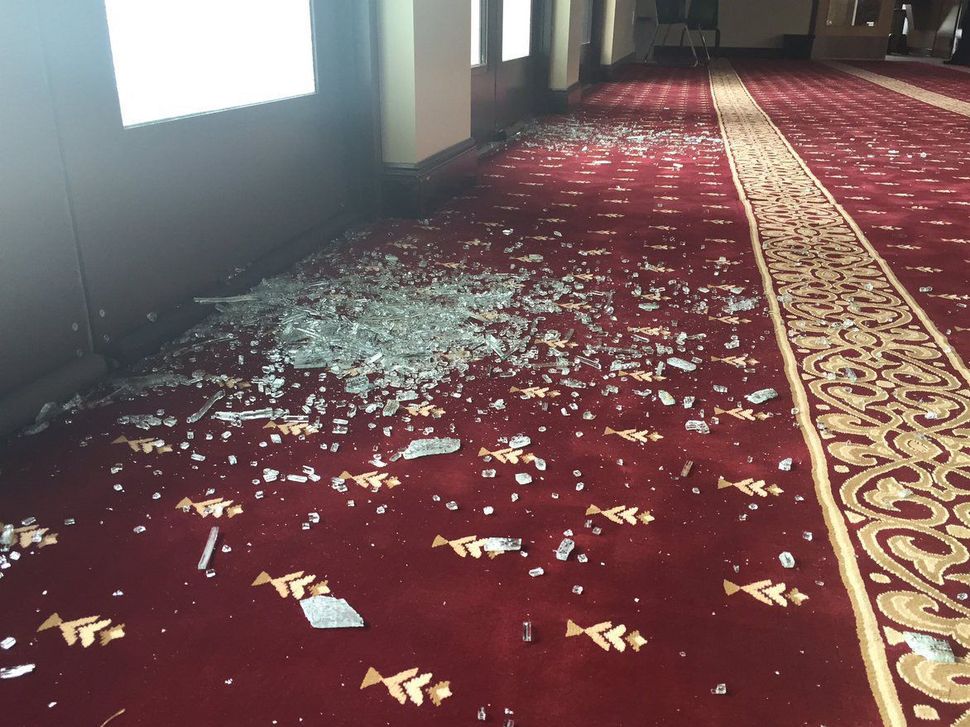 The treasurer of a Colorado mosque vandalized on Sunday said he has been heartened by hundreds of neighbors of all faiths, including local Jews, who gathered in a solidarity rally at the house of worship and covered the costs of repairs.

“There were a lot of people out here, and we were able to hold their hands together and make a human chain around the Islamic Center of Fort Collins,” said Saiq Majeed. “It was quite emotional.”

Majeed said worshippers who arrived at 5:30 a.m. Sunday saw the glass in two of the main entry doors had been shattered. Security footage showed a man trying to break glass with a screwdriver before he hurled stones through it.

“There was no note left behind but there was a Bible thrown in the main prayer hall,” Majeed told the Forward.

Police are investigating whether the vandalism was a hate crime, according to the Coloradoan.

Rabbi Hillel Katzir of the Or Hadash synagogue in Fort Collins said he instigated the rally because he found the vandalism “appalling.” He sang “America the Beautiful,” at the rally with a knitted yarmulke on his head, surrounded by hundreds of locals bearing signs of love and support for the mosque.

Katzir told the Forward that while he was concerned about recent anti-Semitic incidents like the toppling of graves in Jewish cemeteries, “what’s happening to Islamic communities in this country is a much higher level of threat.” He pointed to recent shooting attacks on Indians whom the shooter believed were Muslims, and to arson attacks on multiple mosques.

“The Jewish community is not shrugging off what’s happening to the Islamic community,” he added.

Muslims have stepped in to support Jewish victims of bias crimes; in February, Muslim organizers raised more than $130,000 to repair vandalized gravestones in St. Louis, Missouri.

The shattered windows are the latest in a string of recent attacks on mosques. The Council on American Islamic Center reported 33 incidents of threats, vandalism or arson to mosques since the beginning of 2017.

In addition to the rally, supporters have raised more than $20,000. Majeed said the money will repair the broken doors and pay to fortify the five entrances and dozens of windows in the building.