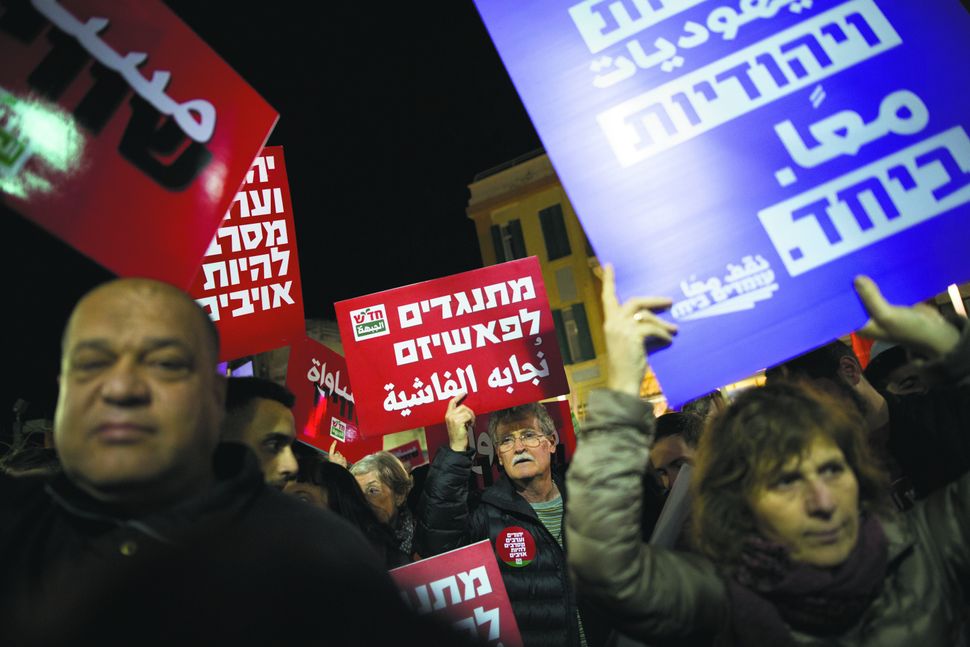 Fighting Back: Israeli Arab citizens and their supporters in Tel Aviv protest the recent demolition of homes in the Bedouin village of Umm al-Hiran in the Negev desert in February. Image by Flash90

A big row is brewing between Israeli Arab citizens and their government, and it all seems to stem from a surprisingly small activist source.

The year 2017 began with protests as thousands of Arab citizens took to the streets to counter the demolitions of homes without permits in their neighborhoods.

In Umm al-Hiran, a Bedouin village in the Negev, protests turned violent during a court-ordered demolition in which a police officer and a Bedouin resident were killed. In Qalansawe, a village outside Netanya, residents set up a tent at the entrance to protest continued demolitions in the city.

The ramped-up demolitions exacerbate a fragile state of affairs in Israel by threatening to ignite tensions between Arab citizens and the state that could flame up into violence. The stakes are getting higher as the demolitions proceed.

Yet the uptick in home demolitions can be traced almost in its entirety to a small, nondescript office in the Sha’ar Binyamin industrial zone outside Jerusalem in the Israeli-occupied West Bank. That is the headquarters of Regavim, an Israeli organization focused on stopping unauthorized building in the Arab sector.

“All of the home demolitions that are taking place now are a result of their pressure,” said Jafar Farah, head of Mossawa, an Arab rights organization based in Haifa.

Regavim was founded 11 years ago by Bezalel Smotrich, now a parliament member with the far-right pro-settler party Jewish Home, who has since left the organization. His cofounder, Yehuda Eliyahu, is still the head of the group.

The group’s name roughly translates to “clods of earth,” a Zionist term to describe how Jews acquired land in Mandate Palestine, building the state of Israel bit by bit, said Meir Deutsch, director of policy and government relations at Regavim.

According to Joshua Hasten, the group’s international director, Regavim aimed to provide a counterweight to Israeli and international groups that monitor settlement growth in the West Bank, like Peace Now.

“Nobody was exploring the situation on the other side, in the Arab sector, or the Bedouin,” he said. “We saw there was a gap in that.”

Though Regavim is headquartered in an Israeli-run industrial park in the West Bank, Hasten insists it is not a settler organization. The group works all over Israel and the occupied territories, with three field workers constantly traveling to locate unpermitted Arab building when it first springs up, before a project’s advancement makes it harder to fight in court. The group also works in the Knesset, to lobby the government to uphold its laws against building without a permit and to create new stringent protocols.

Regavim, which has fewer than 10 employees, is registered as a non-governmental organization in Israel. It does not receive national governmental support directly, but is sometimes hired by Israeli municipal bodies, including in the West Bank, for various projects. While most of its private support comes from Israelis, American donors also chip in, said Hasten.

Regavim’s work got a political boost at the end of December when Israeli Prime Minister Benjamin Netanyahu announced that he would be ordering Public Security Minister Gilad Erdan to enforce the law against illegal building in the Arab sector. His announcement came on the eve of the demolition of an unauthorized Jewish outpost in the West Bank, Amona, which the Israeli high court ruled was erected on private Palestinian land after a successful petition by the anti-occupation group Peace Now.

Netanyahu’s promise to do away with “double standards,” according to Israel’s newspaper Yediot Aharonot, can be interpreted as an appeal to his base, which was furious over the Amona evacuation.

But Regavim is also taking — and being given — the credit. In a February video taken in a Knesset interior ministry committee shared with the Forward by Regavim, Taleb Abu Arar, a Bedouin politician with the Joint Arab List party, speaks in passionate tones about the struggle of Bedouin to hold on to their houses as Israel razes their property.

“The entire country cannot surrender to the Regavim movement, which is at the forefront of house demolitions and land confiscation,” he said. “There is no way!”

Abu Arar goes on to say that Regavim works hand in hand with the Jewish Home party. “What concerns them day and night is how to seize Arab lands,” he says, “how to destroy houses, and how to build new Jewish settlements. Friends, wake up! It’s time to rise up!”

The issue of unpermitted housing in Israel’s Arab sector is a complicated one. Regavim estimates that there are 110,000 structures built without permits in Israel, 90% of which are in the Arab sector. In the West Bank’s Area C, which is under Israeli civil and military control, there are 25,000 such structures, with 4,000 built by Jews and the rest by Palestinians.

Farah says the number of unpermitted buildings in Arab areas is much lower, placing it at 50,000. A representative for the Civil Administration, the Israeli administrative body in the West Bank, did not respond by deadline to an inquiry asking how many unpermitted structures there are in Area C.

Advocates for Israel’s Arab minority say that the scale of illegal building reflects the discriminatory difficulty Arabs face in acquiring permits to build.

The issue reflects “decades of policy discrimination and restrictions on development of Arab towns and villages and the lack of planning,” said Suhad Bishara, the director of land and planning with Adalah, a legal center for Arab rights in Israel.

A 2016 report by a government committee chaired by Deputy Attorney General Erez Kaminitz described the problem:

“According to professionals, the increased difficulty in the Arab sector stems from the fact that in some parts of the population illegal construction is perceived as necessary, legitimate and justified in light of the lack of housing and planning over the years,” the report said. “This narrative exists even if over recent years there has been much progress in planning solutions and master planning in particular,” it added.

Farah believes that Regavim’s work is motivated by the desire to sow unrest in the Arab community in order to stall a peace process that would have Israel relinquishing the West Bank for the Palestinians to build an independent state.

In Farah’s telling, Regavim wanted to show Jewish Israelis and Americans that the Arabs wanted to “throw [Israeli Jews] to the sea.” In order to do that, “you need to complicate the situation with Arabs in Acre, Haifa and Jaffa and with Arabs in Israel in general and create clashes between Arab communities in Israel and the state institutions and Jewish communities.” In other words, Regavim needed to jab the Arab community where it hurt: housing.

Hasten rejects that notion, saying that his group only wants Israel to enforce its laws equally.

In mid March Israel updated its laws in accordance with the recommendations in the Kaminitz report, which calls for fines for illegal construction, police summons for those who don’t comply with the law, and other enforcement mechanisms. Local municipalities will also be placed under a national enforcement unit to ensure that building in their boundaries proceeds according to the law.

The law “is taking care of many different aspects that we for years have been pointing out as problematic areas of enforcing the building laws in Israel,” said Deutsch.

But Farah says it is too punitive, and will only empower Regavim when Arabs in Israel need real solutions to their housing crisis.

In a statement, Farah called it part of a “tireless effort to complicate what was left of normal relations between the state and its Arab citizens.”

Update note, May 1: This article has been updated to reflect the fact that the Israeli parliament passed a law in March in accordance with the Kaminitz report.