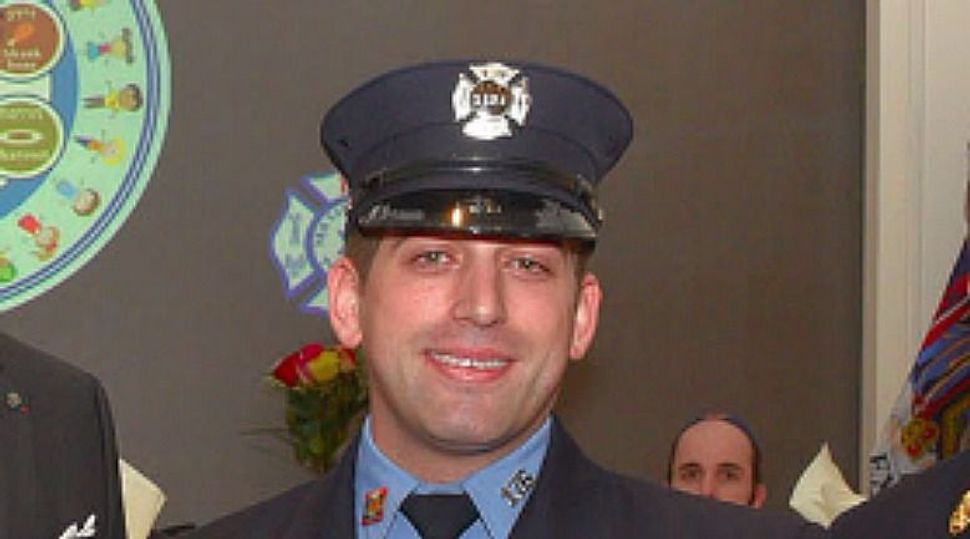 Andrew Scharf, 29, was honored for his daring March 5 rescue of Ubeaka McKinney, whom he pulled from the third story of his burning apartment complex in the Brownsville section of Brooklyn.

He used a rare and perilous technique in which he rappelled down from the roof – what department chief James Leonard called an expression of Jewish values.

“That kind of rescue does not happen often and it’s for good reason,” he said. “It’s a last resort when there is no other way to save a life, and he did it. In the Jewish community, they say when you save one life, you save the world.”

Asked about what it’s like to be a Jewish firefighter, Scharf told the Forward that he’s never seen a difference between himself and his fellow firefighters.

“I’ve been used to it all my life,” the seven-year veteran firefighter said. “It’s the career I wanted ever since I was a kid.”

The tribute to Scharf came at the historic Seder – hosted by the FDNY’s Jewish Ner Tamid Society in the department’s downtown Brooklyn headquarters.

Rabbi Joseph Potasnik, the FDNY’s chaplain, wisecracked as he walked the multiethnic crowd through the different steps of the ritual meal, using a learner’s Haggadah full of handy illustrations.

“When are we done? When do we eat? Do we have to read the whole thing?” he asked. “Do we have to do it again tomorrow?”

Reflecting the meal’s participants, diversity was a frequent theme at the first-of-its-kind dinner.

“We are working to grow as a department and foster more understanding of each other,” Commissioner Joseph Nigro said. Michael Melnicke, another rabbi who spoke at the event, struck a similar chord: “Diversity means not being afraid of sharing your unique views.”

Compared to other city agencies, the FDNY has historically struggled to maintain a corps of firefighters whose racial and religious makeup mirrors that of the rest of the city – with Jews and many nonwhite groups being underrepresented in its ranks. The department is currently under court order to change its hiring procedures, and as part of the effort has appointed a new chief diversity officer.

Other speakers included Israel’s consul in New York, Dani Dayan, and Cantor Eric Freeman from Yeshiva University. At the beginning of the ceremony, “Hatikva” was sung right after “The Star-Spangled Banner.” The FDNY also issued its own trademark yarmulkes for the occasion.