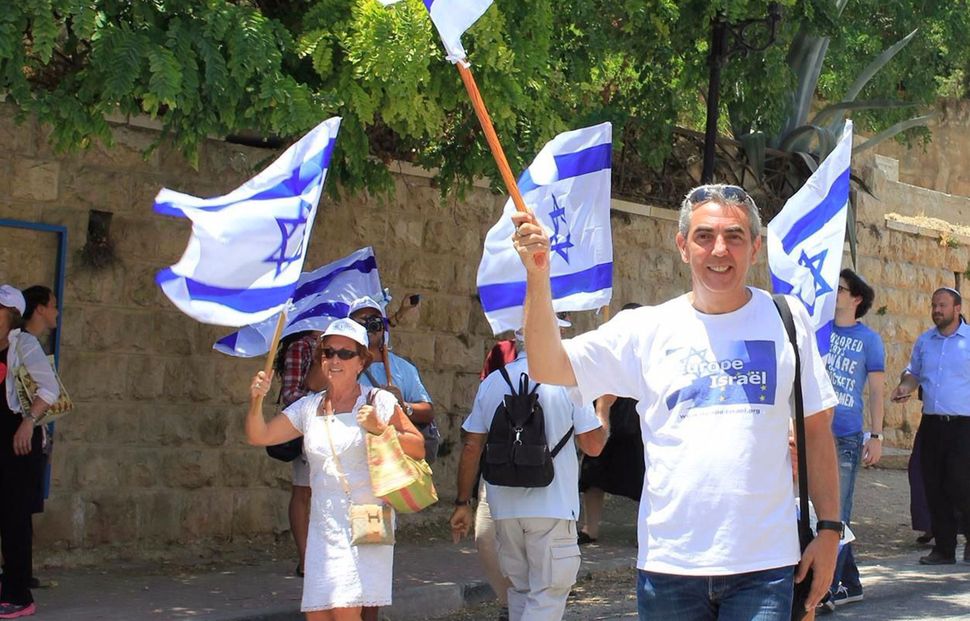 Like a Jewish Breitbart, the website Europe Israel has taken over the online conversation in Europe’s largest Jewish community. Now, as a crucial election approaches, its longtime bombardment of French Jews with biased, slanted news articles and controversial coverage of real, and sometimes fake, anti-Semitic attacks is having real consequences.

Though the website never explicitly endorses French presidential candidate Marine Le Pen, with the first round of the presidential election scheduled for April 23, critics believe that the site’s impact, if not intent, is to push Jews toward voting for the contender whose party is historically tied to Holocaust denial and to Nazi sympathies.

How did one website becomes so influential? France’s alt-Jewish media kicked off in 2008 in reaction to what many French Jews see as bias against the Jewish state in mainstream media. The founder of Europe Israel, Jean-Marc Moskowicz, a longtime activist in the Jewish community, set up a Facebook group then called Europe Stands With Israel. Today it is the largest French speaking pro-Israel Facebook group in existence, with almost 50,000 fans. The website Europe Israel, which sprang from that original Facebook page, is meanwhile, the most visited Jewish website in France, with an astonishing million monthly readers. Posting around 25 articles a day, written by unpaid journalists and activists, Europe Israel reaches an audience far beyond the Jewish community.

The five founding members of the association that sponsored this enterprise began by launching a simple blog featuring hot takes and links to forceful pieces on three main subjects: anti-Semitism, Israel and the rise of Islamism. Yet critics say the website has more in common with France’s flourishing “alt-right” media scene than with what used to be traditional Jewish community portals. Since its creation, this scene has also evolved: Many other Jewish websites have copied Europe Israel, adding to the trend of alt-Jewish publications.

“These websites share articles from the classical professional press, but in a really selective way, serving a narrative obsessed with besiegement and showing strong defiance toward ‘medias,’” said Rudy Reichstadt, founder of Conspiracy Watch, a French website devoted to tracking conspiracy theories and those who promote them.

“It’s a pro-Israeli and Jewish community version of more or less conspiracist websites whose goals are to ‘re-inform’ public opinion,” he said. Reichstadt cited a story Europe Israel aggregated from openly conspiracist content on the Russian media outlet RT, accusing President François Hollande and the French government of having orchestrated the deadly January 2015 terrorist attacks on the publication Charlie Hebdo and the kosher supermarket Hyper Cacher.

“A lot of people in the Jewish community do not trust mainstream media anymore,” said Michael Blum, a French Israeli journalist based in Israel who is the founder of Israpresse “With these websites, they find an ideological cocoon that comforts them in the idea that Israel is always right, that Jews are the best.”

The “alt-right” Jewish publications feature some favorite buzzwords: “Désinformation”—disinformation—is one, used in referencing the mainstream media; “ré-informé,” literally, informing anew, is used to describe what the “alt-right” sites themselves purport to do. They, in turn, are part of the larger French “alt-right” media scene known as the “Réinfosphere.”

“We are an influence website, we are part of the Reinfosphère,” Moskowicz told the Forward proudly.

Moskowicz explained that the lodestar of the Reinfosphère is FdeSouche. Critics call it an anti-Muslim hate site. But Moskowicz sees nothing wrong with it: “I find them to be pretty honest even if, obviously, they choose to repost articles promoting their vision.”

How does Moskowicz explain his politics? He says Europe Israel is “first Zionist and Jewish,” but then admits, “No need to hide it, we are rightists, rightist Zionists, no leftists for sure, but without any political affiliation.”

For the past few months Trump has been a star of the website. Moskowicz claims to have predicted his victory: “By merging the data of thousands of unofficial polls, not the CBS ones, we were the only one in Europe to predict his victory!” Moskowicz says his contributors feel close to Israel’s right-wing Likud party, led by Prime Minister Benjamin Netanyahu. He also said that he likes some of the statements of Naftali Bennett and Avigdor Lieberman, politicians to Netanyahu’s right.

Does he vote for Marine Le Pen? Moskowicz said he would never do so. But he doesn’t like media bashing on her party, the National Front. “They have awful people but they also have nice guys,” he said. “Some support Israel!”

Moskowicz believes Le Pen has been successful in “detoxifying” her party, and now he basically treats her as he would any other rightist politician — a kind of normalization. “When she says something right, we approve it,” he explained. “When it is something bad, we write that, too.”

Critics say this approach does the “detoxifying” of Le Pen for her. Moskowicz refuses to take responsibility for any normalization of the far right. He recalled that he quit his position in a community organization called the “European Jewish Parliament” when it planned a meeting with Le Pen.

“As a child and grandchild of deported Jews, I’m aware of the Holocaust-relatively. But I think she’s not a danger for Jews,” he said.

Moskowicz says his website has no ties to Breitbart, or to Russia. The website, he says, is funded with a modest budget of about $43,000 a year, with about $32,000 of this going to pay for the use of ultra-secured servers. It is funded, he says, by ads and small donations.

Unlike Steve Bannon, the former Breitbart editor who now sits near Trump in the West Wing of the White House, Moskowicz does not claim to be either a media mastermind or a political strategist. His and other right-wing Jewish publications do, however, have major political consequences: Europe Israel and company have certainly accelerated the rightward lurch of France’s Jewish community.

“Since 2008, the Jewish community dramatically shifted from the left to the right,” Moskowicz noted. “Seventy-five percent of the Jews vote for the right and more and more for Le Pen… They are afraid of Islam and immigration, which are real issues.”

Still, controversy stalks Europe Israel. Two weeks ago, it reported exclusively that Jewish graves in a cemetery close to Paris had been destroyed by a truck, and speculated that this could be an act of anti-Semitism. The police and the Jewish security organization SPCJ declared, a little late, that it was an accident. But articles from the alt-Jewish websites were already everywhere, doubting this possibility. Critics accused them of promoting a culture of suspicion and conspiracy.

“I don’t ask myself the question of the reality of the official version,” Moskowicz said. “But many people ask questions. I saw the picture of the truck and still I don’t get how it happened.”

Moskowicz insists his team sources everything. Yet these sources range from mainstream media outlets to rightist think tanks, to unknown websites and simple posts on social media. Last week, Europe Israel posted an article from one of its journalists in Israel that mentioned an attack on a synagogue in southern France, purportedly by a Muslim. The report was based on social media claims. As it turned out, someone did attack the synagogue that night: a drunk Jew.

“Making mistakes happens to the best of us,” Moscowicz said, laughing, when asked about this. He noted he later took down the erroneous information.

Europe Israel now plans to go global. The team is preparing a new website to be launched within the next 15 days with a mobile app as well as English, Spanish and German versions. His ambition for the site, Moscowicz said, is to become “a real European news media.” The battle over Jewish public opinion is not over.