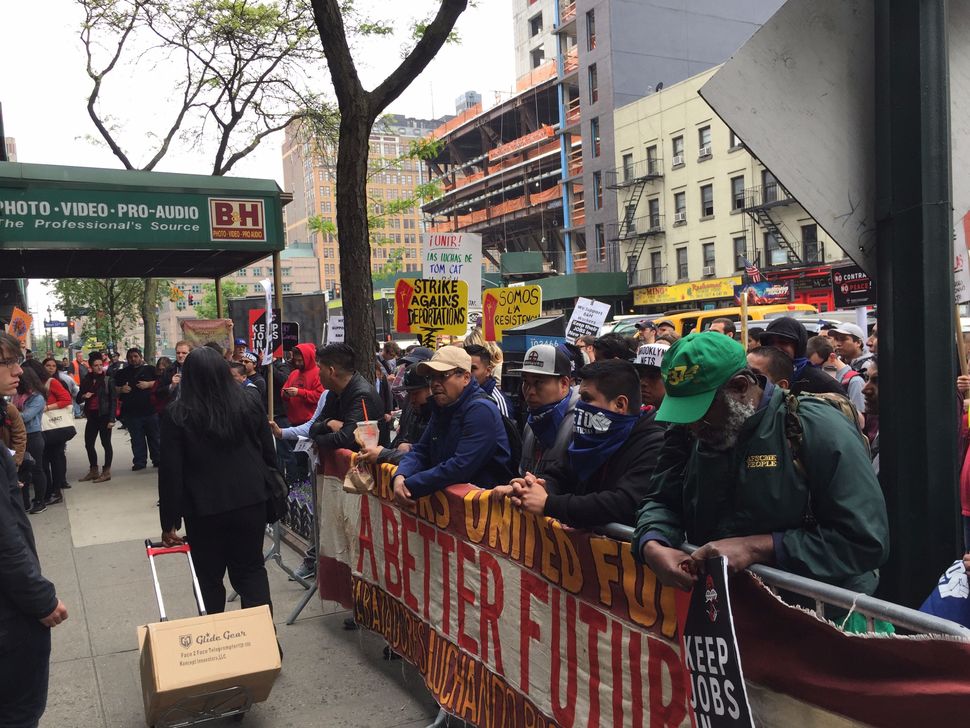 Unionized warehouse workers at the Hasidic-owned electronics retailer B & H Photo Video called a daylong strike on Monday, in protest of the company’s plan to shutter its two Brooklyn warehouses.

At a large rally outside B & H’s Manhattan flagship store, workers said that they opposed the move — and praised their union, formed just two years ago, which could be threatened by the closings.

“They treated us like animals,” said Armando Girron, a 9-year veteran of B &H, of conditions before unionization.

The workers unionized in 2015, shortly before the federal government charged B & H of forcing Hispanic employees to use separate bathrooms.

Now, the unionized warehouse workers say that the company’s plans to move its warehouse operations to New Jersey constitute an attack on the nascent union, which had yet to negotiate its first contract when B & H announced it would close the job sites.

“The company is saying they are acting in good faith,” said Jorge Llora, a Dominican-born B & H worker. “But the reality is they are using dirty tactics to destroy the union.”

In a May 1 letter sent to B & H management, union workers demanded that the company keep the Brooklyn warehouses open.

“ON MAY 1, 2017, WE ARE WITHHOLDING OUR LABOR FOR ONE DAY TO DEMAND THAT…B&H respects and acknowledges that WE…dedicated our lives to building up your operations in the Brooklyn warehouse for decades,” the letter begins.

Organizers said that more than 200 workers participated in the daylong strike. They plan to return to work on Tuesday, May 2.

Known for its massive Manhattan camera store, B & H is owned by Herman Schreiber, a member of the Satmar Hasidic community. The store’s staff is heavily ultra-Orthodox, and it is known for providing employment to ultra-Orthodox men from across the New York area. 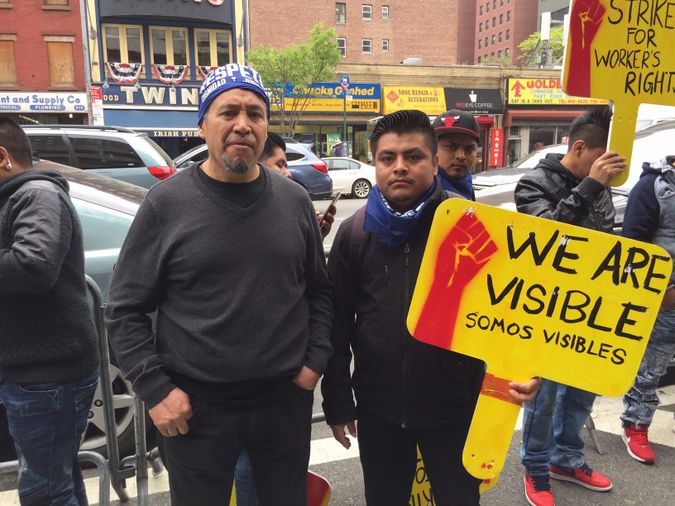 The daylong strike was timed to coincide with International Worker’s Day, a worldwide leftist holiday. B & H workers said that the warehouses were still open on May 1, operated by temporary employees who work alongside them at the job sites, and who are not union members.

The company’s decision to close the Brooklyn warehouses had nothing to do with the union, said a spokesman for B & H, Michael McKeon. McKeon said that the lease on one of the sites was set to run out in 2018, and efforts to find a new facility began before the workers organized. McKeon said that all warehouse employees had been offered jobs at the new warehouse, 75 miles away in New Jersey.

“We understand the workers have a right to express themselves,” he said. “We’ve got great respect for our workers, which is why we gave them 6, 7, even 8 months’ notice” before closing the warehouse.

McKeon also said that unionized workers at the store’s Manhattan warehouse, which is not closing, had not joined the May 1 strike, and are still in contract negotiations with the company.

Outside the Manhattan flagship store on Monday morning, workers chanted with banners and loudspeakers, joined by young leftists from the Democratic Socialists of America.

“We don’t want them to move,” said Girron. “The majority of my colleagues live in New York.”

Another warehouse worker, Santiago Ibarra, said that he appreciated the support of the union. “We have more strength when we are united,” he said.