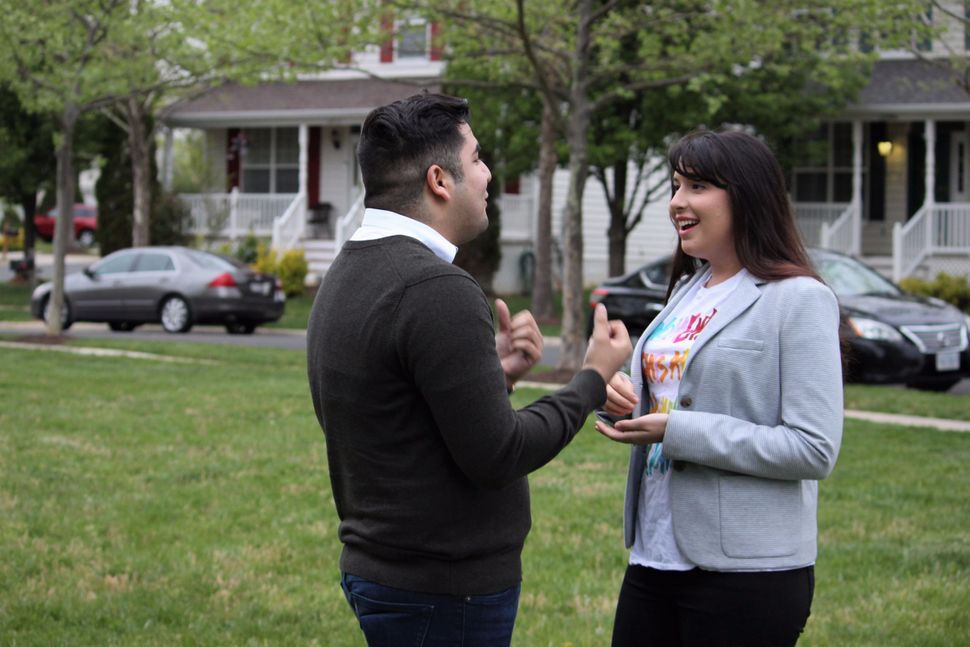 Hannah Risheq won’t be the first Jewish American in politics, nor is she the first Muslim American running for office. But the 25-year-old Virginian now seeking a seat on the State House Of Delegates is likely the first to run as a Muslim-Jewish candidate.

“Most people won’t believe me, but I identify as Muslim and Jewish and as an Arab American. People think you can’t be both but, you know what? That’s what I am,” Risheq said in a May 3 interview.

As a young adult, she can clearly recall her childhood, in which she experienced harsh racism. Risheq says the election of President Trump is a call to action, especially after a spike in racist incidents in her patch of Virginia’s Washington, D.C., suburbs. “I saw it transmitting down to the people here and I decided I’m the best person to stand up and fight,” Risheq said. “I didn’t see anyone with my background stepping up, I didn’t see anyone with the things that I had overcome.”

Risheq’s age and life story attracted national attention beyond that expected from a local race in Virginia’s 67th District, a suburban area in Fairfax County, next to D.C. She was described as the product of the anti-Trump resistance and as a symbol of the new generation of politicians it is ushering in. Risheq could easily become the poster child of this movement, with her diverse personal background and her zeal for reshaping politics from the bottom up.

Risheq is now traveling through the district, trying to reach out to as many of its 81,000 voters before the June Democratic primaries, where she is the only minority woman running. “I need to get out of the primary, and as soon as I do, I know I can beat the Republican,” she stated.

Her politics put Risheq in the progressive end of the Democratic Party. She is an advocate of women’s rights and LGBTQ equality, and of a pro-immigration policy. A social worker by profession, Risheq has focused much of her campaign on the need to preserve Obamacare (repealed May 4 in the House Of Representatives), expand funding for mental health and combat the opioid epidemic.

Growing up in a small town in North Carolina was a challenging experience for the daughter of an American Jewish woman from Philadelphia and a Palestinian-American Muslim. Shortly after Risheq was born, members of the Ku Klux Klan burned down her parents’ restaurant. Her parents advised their children not to talk about their religious beliefs. The family even celebrated Christmas “just to blend in,” she recalled.

But things got worse after 9/11. Friends turned their backs on the family, and her parents’ business lost most of its customers. Risheq’s response? She started going to church in an attempt to make friends. “Every time I would come home from church, my mom would say, ‘Don’t forget — that’s the one that we don’t believe in,’” she recounted. “Eventually I got fed up with it and said: ‘You know what? This is who I am.’ And I lost a lot of friends again.”

Relief came only in 2010, when the family decided to escape the racist atmosphere by moving to Fairfax County in Northern Virginia, which has a significant population of both Muslims and Jews.

When Risheq was growing up, her parents tried to instill in her love for both faiths. They taught their children about the similarities between Islam and Judaism. The family would celebrate Passover as well as Ramadan, and on some Fridays they’d go to mosque in the afternoon and to synagogue in the evening.

One issue, however, was always difficult at the Risheq household: the Israeli-Palestinian conflict. “This is where my parents have the biggest fights,” she said, noting that her mother sides with the Israeli point of view and that her father, who left Hebron after the Israeli occupation in 1967 and spent most of his life in Kuwait, sides with the Palestinians. Risheq will soon be married, and her fiancé, who is Jewish, would like her to visit Israel with him, but this is one issue the young aspiring politician is reluctant to take on, at least for now.

While enjoying the national attention her campaign has drawn, Risheq is not thinking beyond her home state. “I like being able to interact with the constituents,” she explained. “I like seeing what I do pay off on the ground.”