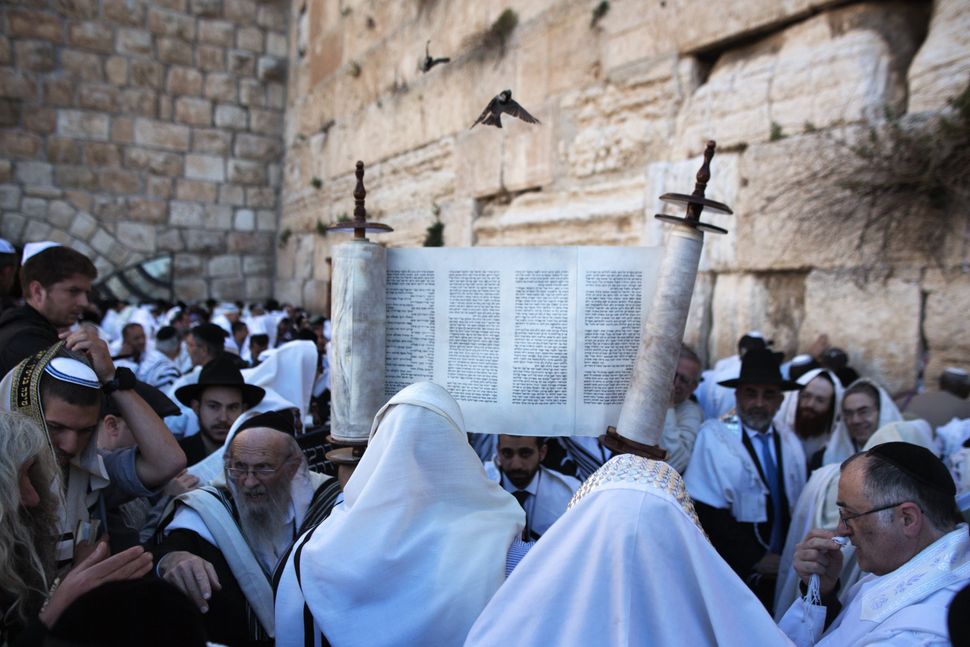 Rabbi Michael Feshbach has been offering introductory courses to Judaism at his Reform synagogue in Chevy Chase, Maryland, for the past seven years and attracts a range of students — unaffiliated Jews, non-Jewish spouses, even groups from nearby Christian churches. The small classes might meet in the sanctuary of Temple Shalom, where the rabbi will teach religious texts or pass around the Torah for students to hold.

At the end of the three-week class, some of the students are so moved by the experience that they will ask Feshbach how they, too, can become Jewish. He encourages more study, and ultimately he has helped some undergo conversion. For example, Feshbach recently attended the Jewish wedding of one former student, a Hindu-raised woman who later converted. The two Jews wed under a chuppah, or bridal canopy, where the bride had patterned her arms in Indian-style henna.

“The idea is to build bridges,” Feshbach said. “And people may decide to cross those bridges.”

Feshbach is part of a small group of mainstream Jewish organizations and individuals that promotes the idea of active religious outreach to non-Jews despite a prevalent taboo against the practice. There is a broad spectrum of this kind of outreach: Some do it with the express purpose of converting non-Jews; others, like Feshbach, are open to that possibility, and still others just want to expose non-Jews to what they see as the beauty of Jewish teachings and values.

“We need to grow Judaism,” said Ellen Gerecht, executive director of the National Center To Encourage Judaism, a group that has helped fund such work. “The only way for Judaism to survive in the Diaspora is for us to bring in those from the outside.” 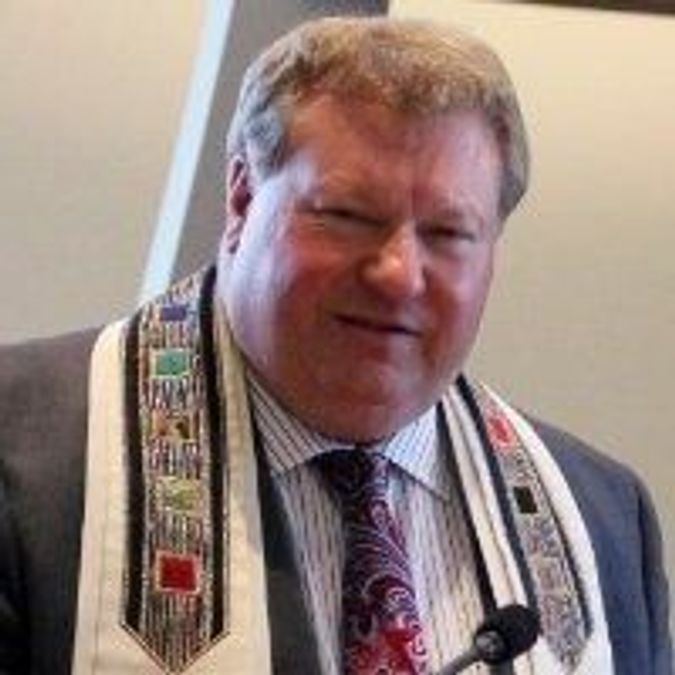 Based in Maryland and founded in 1995, the center spends tens of thousands of dollars toward this end. For example, NCEJ has funded initiatives from Hebrew Union College-Jewish Institute of Religion, in New York, and from the course offered by Feshbach, among many other programs.

“The word ‘evangelism’ sits uneasily with Jewish people,” Hazon’s president, Nigel Savage, wrote in the 2013 essay collection on “Jewish Megatrends.” But, Savage went on, “I think that it is time for the Jewish community to start inviting people, publicly, to become Jewish.”

“It Would Be Discriminatory”

There are a number of reasons for the persistent aversion to proselytizing, both theological and historical, and Gerecht describes her work as an “uphill battle.”

The reluctance is informed by centuries of Jewish life in Europe and the Middle East, where Jews lived as an often-persecuted minority. Today, many American Jews cringe at the idea of promoting their own religion, viewing it as antithetical to what they see as Judaism’s inclusive, tolerant worldview.

“It would be discriminatory for Judaism to proselytize and try to convert those not of the religion,” an article on the Orthodox site Aish HaTorah reads. “That would imply that everybody needs to be Jewish in order to make a relationship with God, participate in the Torah’s vision of repairing the world, and get to heaven. Yet this is not so.”

This is a position held by other Jewish clergy as well.

“Some religious groups, such as certain types of Christianity and Islam, base their theological beliefs on the fact that to achieve salvation — to be saved or be accepted into heaven — a person must be Christian or Muslim,” Rabbi Allison Berry wrote in a 2014 JewishBoston article about why Judaism doesn’t “promote conversion.”

“Most Jews believe you do not have to be Jewish to have a relationship with God or ‘go to heaven.’ Thus it is not a Jewish imperative to seek converts in order to ensure they are provided with a pathway to God and the afterlife,” Berry wrote. 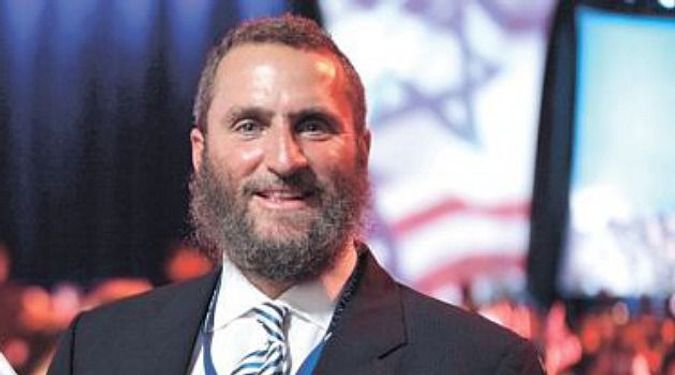 Still, despite this theological stance, Jewish outreach efforts have ramped up in recent years.

In the Orthodox world, this is often framed as reaching out to less religious or “lapsed” Jews, or non-Jewish spouses of Jews.

Chabad is perhaps the best-known outreach group, primarily focused on kiruv, or outreach within the Jewish world. Chabad and related Orthodox efforts hope to bolster the religious practice of other less religious Jews.

But these Orthodox groups also promote another kind of outreach — the spreading of “Jewish values” to non-Jews.

For example, Chabad emissaries are also encouraged to teach the Noahide Laws to non-Jews. Noahide Laws are universal laws that, in talmudic tradition, apply to all descendants of the biblical Noah — not just Jews — and include admonitions like “Do not steal,” “Do not murder” and “Do not deny God.”

Orthodox rabbi Shmuley Boteach takes a similar approach, calling dramatically for a “global movement to disseminate Jewish values and spirituality to all Earth’s inhabitants, making no distinction between Jew and gentile.”

What this would mean, Boteach wrote in 2010, is “bringing Jewish values and spirituality to an existing religious or cultural identity, much like Westerners who have brought meditation or yoga into their lives.”

The Reform movement’s “Taste Of Judaism” course, the classes that Feshbach was offering in Maryland, is another example of this sort of middle ground. Offered to “individuals from all faith backgrounds,” the weekly course is designed for people who “have limited or no Jewish background but are interested in learning about Judaism.”

But, as in the case of Feshbach’s classes, these sort of outreach programs may lead to conversion.

Judaizing “Among The Masses”

While major denominations debate about if and how to embrace outreach of any kind, there are an unprecedented number of people worldwide who are showing interest in Judaism.

There are potentially millions of people across the world who are interested in Judaism in some way. Researchers call them either “emerging” or “Judaizing” groups. In parts of Asia, Africa, the Americas and Europe, many evoke some ethnic connection to the Jews or Israelite people as part of why they feel this interest.

While the Jewish establishment has been somewhat interested in such groups, for the most part smaller groups and individuals have carried out outreach to these would-be Jews.

Shavei Israel is one such outreach group based in Israel that sends out “emissaries” to “lost” or “returning” Jews across the world, often facilitating Orthodox conversions and immigration to Israel. Kulanu, a nondenominational volunteer group based in New York, also supports emerging groups. This year Kulanu helped more than 100 men and women convert on the African island of Madagascar.

And even further afield of these groups are bodies even less timid about outreach to non-Jews. A teacher named Asher Meza, himself a convert, offers online lessons about Judaism and wants to see Judaism spread “among the masses.”

Similarly, self-described “Messianic Jews,” who proclaim Jesus Christ as the Messiah but observe many Jewish holidays and rituals, continue outreach not only to Jews (whom they want to convert to Christianity), but also to other Christians, to whom they may introduce the observance of some Jewish rituals or teachings.

Even recently the topic of this potential groundswell of “emerging” Jews caught the attention of the State of Israel. Last year, Israel’s Ministry of Diaspora Affairs created a special committee to look at the phenomenon, soliciting opinions from demographic researchers and academics.

“Seventy years after the end of the Holocaust the Jewish people finds itself in a somewhat unexpected position,” wrote Tudor Parfitt, head of Florida International University’s Global Jewish Studies Program, in a 2016 address to the committee.

Parfitt described “millions of people” in places like Africa, Asia and the Americas willing to step up and become Jews. “The challenge for Israel and for the Jewish people,” Parfitt wrote, “is to decide what to do about it.”