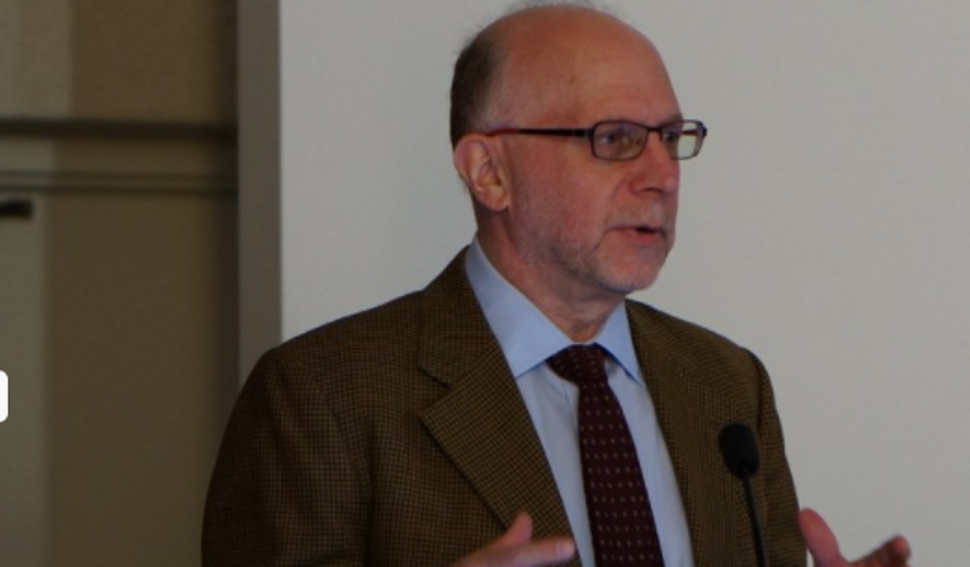 A colleague burst into my office in Jerusalem on Sunday morning with the shocking news: “Did you hear that Alan Mintz died last night in New York?”

I had to ask her to repeat what she had said.

“Are you sure?” I stammered.

“I just heard the news from one of his friends,” she replied. “George would not have written to me unless he was certain. Alan went swimming after Shabbat, suffered a heart attack and died. He was fine earlier in the day, in shul as usual. And now he is gone.”

While most of America remained sound asleep, I thought about how quickly I could summarize Alan’s career for the online H-Judaic, which I chair.

“H-Judaic is profoundly shocked and saddened to learn of the untimely passing, from a sudden heart attack, of Professor Alan L. Mintz, Chana Kekst Professor of Hebrew Literature at the Jewish Theological Seminary, and one of the pre-eminent scholars of Hebrew literature of our time,” I wrote.

But that hardly captures who Alan Mintz was.

Alan was a baby boomer, part of the generation that grew up in the shadow of World War II. He was raised up in Worcester, Massachusetts, a middle- and working-class Jewish community that produced a disproportionate number of Jewish scholars and rabbis in those days, including the Concordia University professor Ira Robinson, and the Reform Jewish leaders Rabbi Eric Yoffie and Rabbi Daniel Freelander. Alan was a proud product of the city’s Conservative movement; he attended Camp Ramah and rose to become president of United Synagogue Youth. He also was a product of Worcester’s activist ethos. The famous social revolutionary Abbie Hoffman was a product of Worcester; he was a dozen or so years older than Alan.

Alan moved on to Columbia University in the 1960s. Back then the university was a training ground for activists, and, being just a few blocks away from the Jewish Theological Seminary, where Alan also studied, it was likewise a nurturing ground for those with Jewish commitments. As anti-Vietnam War sentiments deepened, Alan became a leader in the nascent Jewish anti-war movement. In March 1969, he and a JTS student named Reuven Kimelman (later himself a Brandeis University professor of Jewish studies) helped to organize an anti-Vietnam War demonstration in honor of a conscientious objector at the seminary. It was described at the time as a “Jewish Peace Demonstration,” and it was unprecedented.

Alan then went on to create, with others, the New York Havurah, an activist group that combined study, prayer and fellowship and prided itself on being a “a Jewish community that can both protest and pray together.” This was the second major havurah of its kind established in the United States, following the 1968 establishment in Somerville, Massachusetts, of Havurat Shalom Community Seminary.

Two years earlier, in 1967, Alan helped to found Response Magazine; he was its first editor. The magazine’s roster of authors serves as a who’s who of Jewish activists. Many of them went on to become Jewish leaders. Response gave voice to critical student writing about the Jewish community that over time helped to transform Jewish journalism and the American Jewish community itself.

In Response’s inaugural issue, Alan contributed two pieces that anticipated central commitments of his life. The first, titled “Fear and Trembling: A Retrospective Critique of United Synagogue Youth,” boldly announced that “USY is in trouble and is failing to respond to a critical situation which has been evident for a few years.” He pronounced the organization out of touch with religious and social developments among American Jewish youth – too concerned with dances and not concerned enough with contemporary religious ideas and social justice. “Youth has changed,” he warned. He urged the JTS to change with it and to intervene while there was still time.

Alan also contributed a book review to that first issue. His subject was S.Y.Agnon’s novel, “Bilvav Yamim” (“In the Heart of Seas”). He would spend the rest of his life thinking and writing about Agnon, and from that first review he insisted that Agnon was not just a universal writer, but also one whose central message carried relevance to young American Jews like himself. Comparing Agnon’s day with his own, he observed that “similarly today there are people finishing school who have a vital and creative vision of Judaism to offer to the organized community. Whether they will try to contribute, whether the community will receive them, and whether they will have the courage to persevere in the face of disregard all constitute questions not yet answered.”

In 1971, Alan along with James Sleeper, today a renowned author, teacher and journalist, edited a widely discussed volume titled “The New Jews,” a volume that gave voice to the era’s committed Jewish radicals and brought to a larger audience articles that had originally appeared in Response. As Yehudah Mirsky pointed out in a smart retrospective published for the book’s 40th anniversary, the volume “sought to give voice to a small cohort at once deeply alienated from organized Jewish life and deeply attached to Jewish history and culture.” Mintz proudly described these essays in terms that reveal his own deeply held values. Each of them, he wrote, was “an experiment in thought, a tentative pause and assessment to prepare the ground for action that is historically grounded, culturally viable, and spiritually engaging.”

Like so many of the Jewish radicals of that time, Mintz was simultaneously an activist and a nerdy graduate student – in his case, in literature. His doctorate resulted in a highly regarded book published by Harvard University Press: “George Eliot and the Novel of Vocation” (1978). But like many of the committed “New Jews” that he wrote about, he too soon shifted, from secular pursuits to Jewish studies. He taught Hebrew literature at the University of Maryland and at Brandeis, and then in 2001 he returned to the very institution that he loved and challenged, the JTS, where he continued to teach until his death.

Mintz made major contributions to the study of modern Hebrew literature. In 1981 he co-founded and co-edited Prooftexts, which became a pre-eminent journal in the field. He produced a series of highly regarded works on Hebrew autobiography, the Hebraist movement in America and catastrophe in Hebrew literature, and repeatedly he returned to the work of S.Y. Agnon.

Indeed, his most recent book is a new edition of Agnon’s “A City in Its Fullness” (Toby Press/Agnon Library), the first of what he envisaged as a series of studies on Agnon’s memorial for his home city of Buczacz in Galicia. “Mintz’s work will take the form of a collection of translated stories and a critical study of the fiction,” his official biography explains.

“This is an unprecedented project to re-envision, through the medium of fiction, the lives of Polish Jews during the early modern period.”

Although Alan’s grand project remains sadly unfinished, he leaves behind a remarkable legacy. Through his writings, his activism and his teaching, he also provides an unequivocal answer to the question that he challengingly posed 50 years ago in Response. Thanks to him, we now know that the field of Jewish studies, which he cherished and to which he contributed so much, can indeed provide a home for those who have “a vital and creative vision of Judaism to offer to the organized community.”