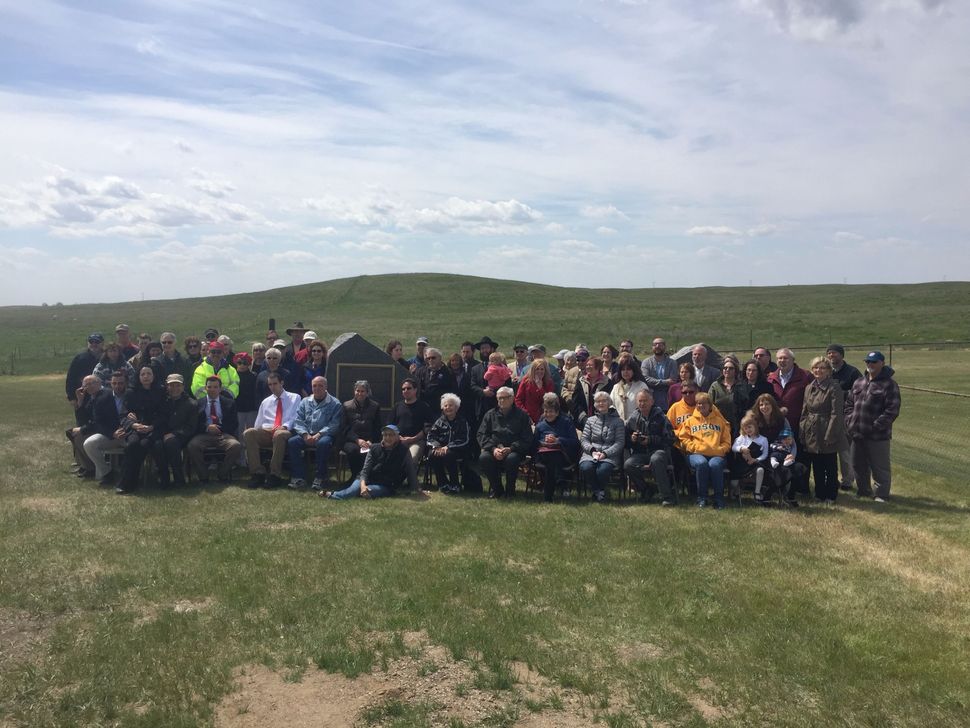 Amid the rolling prairie, under the vast Dakota sky, a small fence encloses 20 headstones with surprising Hebrew markings in a field outside the town of Ashley, population 750.

Local farmers pass it as they drive for groceries into the town, which has no Jews among its residents. But the graveyard’s most frequent mourners are the grazing cattle 500 feet away.

Nevertheless, on a recent Sunday afternoon, anyone driving by would have turned and wondered about the 100 people gathered here. Cars with license plates from New York to Minnesota lined up 30-deep. Families, with some of the men wearing yarmulkes and payot—Hasidic-style side curls—walked the cemetery grounds, looking for the names of their ancestors.

The group came to re-dedicate the Beth Itzchock or Ashley Jewish Homesteaders Cemetery, which contains the graves of about 28 pioneer Jewish farmers in south central North Dakota. In an hour-long ceremony, three generations of descendants unveiled new historic plaques, read words from their ancestors and said Kaddish.

More than a minyan, it may have been the largest gathering of Jewish people in the town since the 1920s.

The Hebrew-engraved memorials face West — towards Jerusalem, but away from the road – so few drivers know that the cemetery is the last physical reminder of a once-flourishing Jewish homesteading community here.

“There’s something very reaffirming for all of us to go back to that land, to realize that none of us would be here had they not gotten on the ships to come here,” said Rebecca Bender, who worked for two years to get the site named to the National Register of Historic Places. Her own great-grandfather, Kiva, is buried here. “It’s also returning to North Dakota and saying, we’re still around.”

Ashley was once a hub for Jewish immigrants. From 1906 to 1932, as many as 400 Jews lived in the town and surrounding county. They fled persecution and pogroms in Russia, and took advantage of free farmland provided to them by the Homestead Act. It was a chance they never had in the “Old Country,” where they were barred from owning land. Some got help and encouragement from the Jewish Agricultural Society and the Hebrew Immigrant Aid Society. Others heard of the place through word of mouth.

“They moved, literally and figuratively the boulders away so they could make a living and a future in America,” said Bender, who lives in nearby Eureka, S.D.

Among those homesteaders were Israel and Sarah Auerbach, who moved here from Russia via New York City in the early 1900’s.

The Auerbachs followed a relative to Ashley and farmed for three years, but had little luck, said their granddaughter, Sarah Lee Sloven, 92, of Des Moines, Iowa, who attended the event on Sunday. The Jews came nearly 20 years after the county opened for homesteading, and many found themselves living in sod houses and clearing endless boulders from their fields. Despite hard work and some success growing wheat and raising cattle and chickens, the homesteaders faced brutal weather, droughts, fires and economic depression.

“It was impossible to make a living,” Sloven said. So, her grandparents opened a general store in town known as Israel’s, where their neighbors, mostly Germans, who left political persecution in Russia, knew them as generous.

“It was not unusual for them to carry a family for a year,” Sloven told the group gathered by the cemetery. As the story goes, the Auerbachs’ non-Jewish neighbors were so grateful that, once, when her grandfather was near bankruptcy, they signed notes of credit for him at the bank.

The cemetery, built so the Jews could bury their own in a distinct plot, is a reminder of their determination to maintain tradition. The homesteaders also bought a synagogue and gathered at each other’s homes for holidays. A traveling rabbi would stop in the town to perform ceremonies, and a local man went to Brooklyn to learn how to slaughter kosher meat.

The challenges of farming here were too much in the end. Some stayed in the region as shopkeepers, salesmen and cattle buyers. But by the late 1920s, most of the homesteaders sold or gave up their claims. One Jew, though, remained in the town through the 1980s: dentist Leo Cohen, whose daughter came Sunday to honor his memory.

Today, there are fewer than 500 Jews in all of North Dakota, according to the 2010 U.S. census. The sole reminder of the Ashley community: The 22 headstones, from 1913 to 1932, which contain the names of those who died — some by flu, some by horse and buggy accident — while farming here.

The cemetery is maintained by a small nonprofit managed by descendants of those interred. They have hired locals, for $300 a year, to maintain the place. 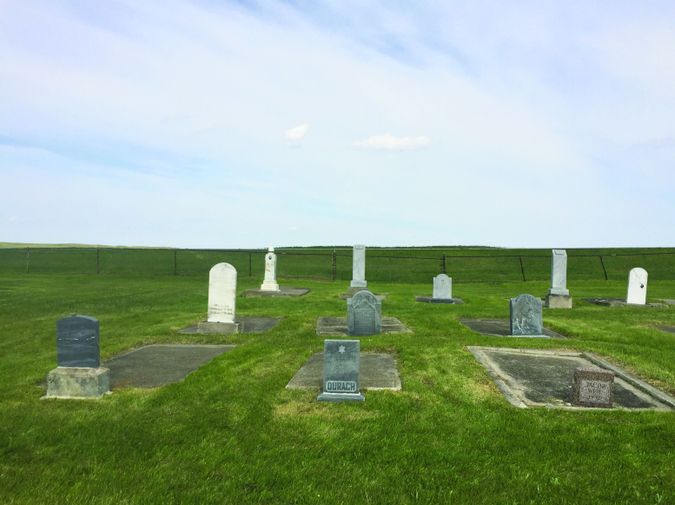 Claude Meidinger, a parts manager at a farm equipment store who took on the job after John Salzer retired after 30-plus years, is understated about his efforts, which take him there weekly to mow the grass in the summer.

“Someone has to do it,” said Meidinger, who stood, hands in his pockets, towards the back of the crowd. “I enjoy it.”

Meidinger was one of at least 30 people from around North Dakota, who traveled to Ashley for the event.

Robert Erbele, a Republican state senator and farmer from nearby Lehr, said he looked at the names on the headstones, and saw the last name of shopkeepers who were friends of his grandparents.

“I have driven by it my whole life, always said I was going to stop and look at the gravestones. Never have, and today was the day I had to do it,” Erbele said.

Two large boulders with mounted plaques, paid for by donations from descendants and a philanthropist named Jerry Klinger, of the Jewish American Society for Historic Preservation, may draw more attention from drivers in the future.

“We’re trying to just bring physical memory to the story of American Jewry and commonality of the American experience,” Klinger said. “Markers are simple things … But it creates a visible, permanent memory.”

At one time, there were at least nine rural Jewish cemeteries in the state, but only three of them are not completely overgrown with grasses today.

Jon-Jay Tilsen, a Conservative rabbi in New Haven, Connecticut, who has three relatives buried in the cemetery, said he hopes the designation on the National Register will help to preserve the memory of the homesteaders and the integrity of the gravestones.

“We want this little bit of history to persist,” Tilsen said. “It is so important for people to learn and practice respect for each other and one another’s sacred places … Now as much as ever.”

Caroline Grueskin is a reporter for the Bismarck (N.D.) Tribune. She grew up in New York City and previously worked as a writer and business associate at The Marshall Project, a nonprofit news organization covering the criminal justice system.