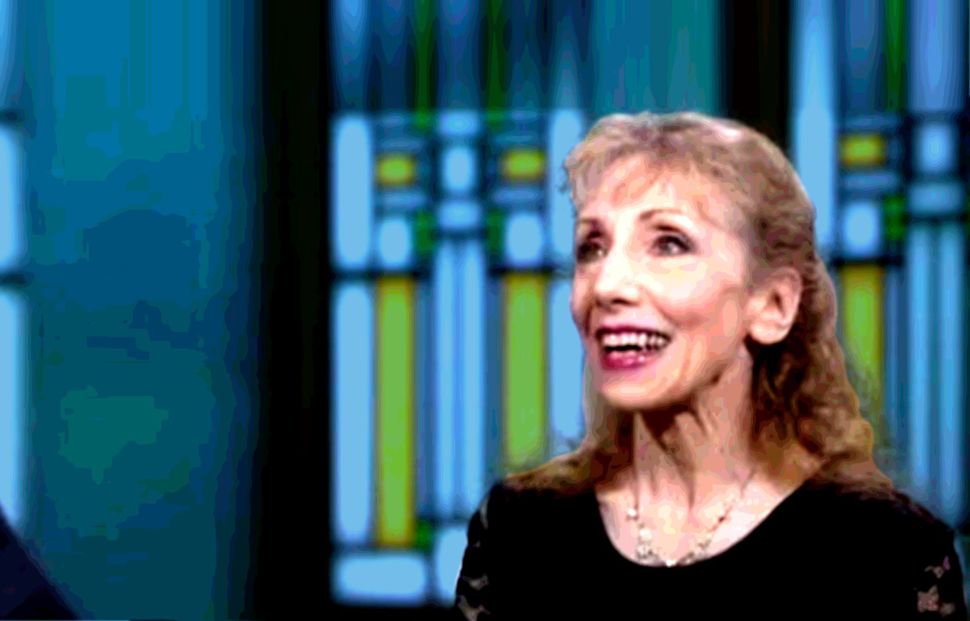 Weiss, who’s been reviewing plays and dance performances for the Chicago Sun-Times since 1984, is an old hand at provoking outrage within the city’s arts community, largely by inserting controversial political opinions —to put it gently — into her reviews.

In the past, Weiss has suggested racial profiling, called Tony Kushner a “self-hating Jew,” and has compared the costumes worn by the Munchkins in a production of “Wicked” to concentration camp uniforms.

Last week a group calling itself the Chicago Theatre Accountability Coalition (ChiTAC) decided that Weiss had finally gone too far. They’re not calling for her firing — they maintain that she is free to write whatever she likes and she’s still welcome in their theaters— but they’ve declared that they won’t enable her anymore. From now on, she’ll have to pay for her own tickets. A petition on Change.org has already received 3,600 signatures.

The breaking point, said Sasha Smith, one of the organizers of ChiTAC, was Weiss’s review of “Pass Over,” a new play by Antoinette Nwandu making its debut at Steppenwolf, the city’s most prestigious theater company. “Pass Over” is a modern takeoff on “Waiting forr Godot.” Two young black men, Moses and Hitch, are trapped on a run-down city street corner for eternity; every time they attempt to leave, they’re deterred by gunshots fired by the “po-po,” the police. Weiss praised the production as a piece of theater and, in the opening lines of her review, described it as “brilliantly acted,” but she disagreed vehemently with its politics, notably the conceit that it’s police gunfire that keeps Moses and Hitch trapped on their corner.

“To be sure, no one can argue with the fact that this city (and many others throughout the country) has a problem with the use of deadly police force against African-Americans,” Weiss wrote. “But, for all the many and varied causes we know so well, much of the lion’s share of the violence is perpetrated within the community itself. Nwandu’s simplistic, wholly generic characterization of a racist white cop (clearly meant to indict all white cops) is wrong-headed and self-defeating. Just look at news reports about recent shootings (on the lakefront, on the new River Walk, in Woodlawn) and you will see the look of relief when the police arrive on the scene.”

In the week since the review came out, police officer Jeronimo Yanez was acquitted of killing Philando Castile, the video of Yanez shooting Castile was released and went viral, and Seattle police shot and killed Charleena Lyles, a pregnant woman who had called to report a burglary. It was, in short, not the best time to argue, particularly in a theater review, that it was “wrong-headed and self-defeating” for a young black playwright to depict cops shooting young black people and that it would be more realistic if the shooting violence was intraracial instead.

“We’re so wearied by that conversation,” Smith said. “It’s flat out not true. You don’t hear it for any other ethnicity. But it wasn’t just that review. It was the catalyst for everything that’s happening now. This dates back so many years. It’s a much bigger issue.”

Indeed, anti-Weiss outrage is a regular occurrence in the Chicago theater community. Last summer, she praised the “authentic” casting of a production of “In the Heights” that had generated controversy for casting an Anglo actor in the lead role of a Dominican American. In the summer of 2013, in her review of “Invasion!” a satire of the Arab-Muslim experience in America, she wrote, “But despite [playwright Jonas Hassen] Khemiri’s passion, those still thinking of the horrific terrorist attacks at the Boston Marathon might well be tempted to ask: What practical alternative to profiling would you suggest?” (That sentence was later removed from the online version of the review.) In 2004, she wrote of Tony Kushner’s’s musical “Caroline, or Change,” “Unfortunately, Kushner, in the classic style of a self-loathing Jew, has little but revulsion for his own roots.”

This is not even the first time theaters have denied Weiss complimentary reviewer tickets; after Weiss compared aspects of the touring production of “Wicked” to Nazi Germany and wrote that the Munchkin costumes looked like concentration camp uniforms, the producer, Joe Mantello, refused to let her in the theater when the show came to Chicago; the Sun-Times sent another critic instead.

But this is the first time there has been such a widespread call to action against Weiss. The day after the petition went out, in an unprecedented move, Steppenwolf itself issued a statement, signed by artistic director Anna D. Shapiro and executive director David Schmitz, that read, in part, “Some of the critical responses from this work have been shocking – not because of the actual critique of the art, but in the way that the responses revealed at best the ignorance of the critic and at worst, a racial bias that, when captured in print, wounded many people of color in this community and their allies, and served as a horrendous reminder of how far we still have to come in terms of racial equity in this community.”

Shapiro and Schmitz met with Sun-Times editor and publisher Jim Kirk, who later told the Chicago Tribune, “We had a productive, wide-ranging discussion about the growing and ever-changing arts scene in Chicago.”

This past Friday, Steppenwolf announced it would not force Weiss to buy her own tickets to review plays at its theater.

ChiTAC claimed that 70 theaters have offered their support, though only four have thus far pledged publicly not to give Weiss any more tickets. Bear Bellinger, an actor scheduled to perform in a workshop production at the Goodman Theatre, wrote an open letter to the Goodman, announcing that he would not perform for Weiss. (The Goodman responded that since the production is a workshop, it’s not up for review. Weiss has, however, in the past written critical reviews of workshop productions.)

Weiss has not been without her supporters. The Tribune wrote an editorial in her defense that concluded: “There’s a hint of campus-style intellectual coddling at play in the attacks on Weiss, as if members of the theater community, like some students and professors, want to exist in a ‘safe space’ protected from disagreeable ideas. But if there’s one place in the creative world that shouldn’t be safe from controversy, it’s the theater. Live performances deliver ideas and emotions in a uniquely powerful way. Playwrights speak their mind, and so do critics. If some members of the Chicago theater community need a ‘trigger warning’ to get through the season, then here it is: You won’t like every review you see.”

In a public statement on Facebook, Chris Jones, the Tribune’s chief theater critic, wrote, “I have never known a Chicago theater to discriminate against, or be unwelcome to, an individual ticket-buyer on the basis of ideas and opinion, and it would be sad day for the arts if that ever were the case. Similarly, as a competitor but also a fellow journalist, I support Hedy’s right, as a long-serving professional in this field, to express her opinion, even though it may be contrary, as in this case, to the prevailing point of view or, at least, mode of expression, and even offensive to some.”

(“It’s so interesting,” Smith said, “that when a group of people of color say, ‘You’re hurting us, please stop,’ it becomes mob mentality and we’re bullies.”)

In an editorial on Friday, the Sun Times said it stood behind Weiss. “Could Hedy have been more nuanced in her comments?” the editorial board asked rhetorically. “Should her review of ‘Pass Over’ been edited better? Was it tone-deaf? We are all free to complain, defend and debate. But Hedy Weiss is a theater critic of integrity who writes from a place of honest good faith. Nothing she wrote comes close to what Steppenwolf assessed as ‘deep-seated bigotry.’”

Tony Adler, the longtime theater critic for the Chicago Reader (which is owned by the same parent company that owns the Sun-Times and, full disclosure, is where I work), had a more complex reaction to the controversy. The review, he acknowledged, was not Weiss’s best work. “I found it cranky and overdetermined,” he said. “She was bringing her own — I don’t want to say prejudices — the things that preoccupy her. I agree with anyone who says it was a poorly written review.”

He doesn’t agree with ChiTAC’s solution to the problem, though. “When you deprive a critic of press comps,” he said, “you’ve done two things. One thing is, you’ve made it very likely impossible that the critic will be able to function professionally. You’ll be making it likely that she’ll be pushed out of the profession. The other thing is, it’s a continuing humiliation. It’s punishment every single time she goes to a show.” 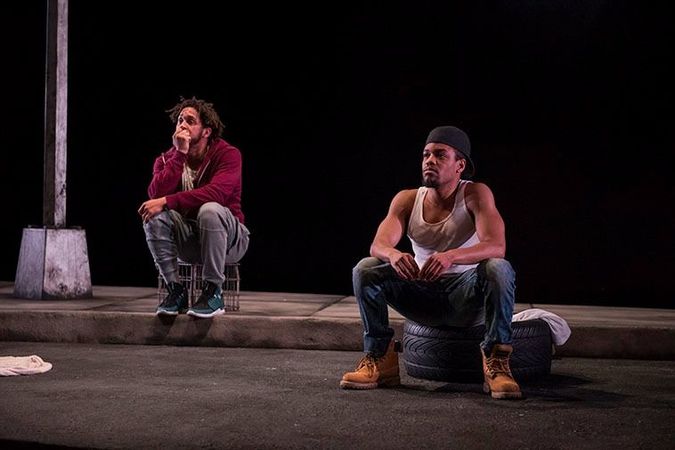 A scene from ‘Pass Over.’

But perhaps one reason for the ongoing outrage is Weiss’s complete and utter lack of repentance not just for her “Pass Over” review but also for every other incident over the years.

Smith pointed out that Weiss was not the only critic in Chicago who wrote an ill-advised review of “Pass Over.” Katy Walsh, who writes about theater on her blog The Fourth Walsh, used the N-word in hers. The condemnation was equally swift, but Walsh responded with contrition. “The word I used wasn’t and is not mine to use,” she wrote in a subsequent post. “My intent was a poetic illustration of the play’s rhythm but it was perceived as a savage attack on a group of people. Instead of connecting people to a powerful play, it fueled rage.” Walsh added that she planned to take off the rest of the summer from reviewing to reconsider her own prejudices and how they affect her role as a critic.

For Smith and ChiTAC, this is a model for Weiss and other embattled critics to follow. “It’s one thing to have your own personal views and express them and then, when people say, hey, that’s hurtful and damaging, it’s important for those people to listen and understand maybe they’re coming from a different perspective,” Smith said. “We’re seeing how effective that is this week, with Katy Walsh owning her wrong and hoping to be a part of the conversation. That is massive.”

Walsh, however, doesn’t represent one of the city’s two major dailies, nor does she have Weiss’s long history of causing offense. It’s unclear, in Weiss’s case, whether an apology could overcome years of ill-will. Adler, for one, thinks she has no alternative but to remain silent. “Defiance will fuel the fire, or contrition,” he said. “She has no viable way out. She’s a white critic of a certain age.”

For ChiTAC, that is, indeed, part of the problem. Chicago’s lead theater critics are all white people of a certain age, while the larger theater community is striving to include a wider range of perspectives.

“You have one very particular lens reviewing many stories for a community that is evolving and practicing inclusion,” Smith said. “Moving forward, I would hope our news sources in general reflect that. We’ve been diversifying and giving people voices, especially people who have been silenced for the most part. It’s always nice to build people up rather than tear them down.”