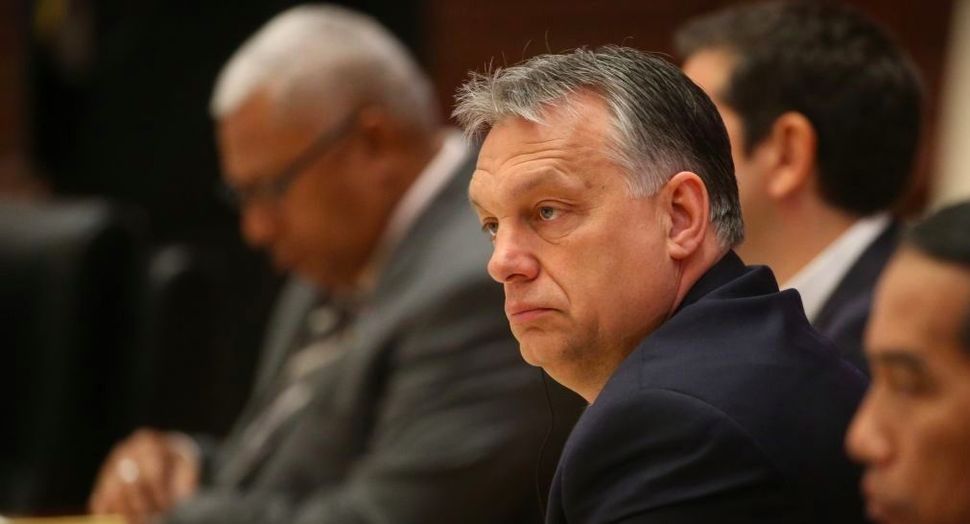 Orban’s language, embracing notions of “ethnic homogeneity,” appears fashioned to occupy territory on the far right abandoned by the radical nationalist opposition party Jobbik, which has moderated its message, analysts and critics said.

Orban has locked horns with European Union partners over respect for liberal democratic conventions and reluctance to take in refugees.

In a speech last week Orban recalled the rule of interwar Governor Miklos Horthy, a divisive figure who led the country for 24 years until 1944, signing several landmark laws against Jews and eventually surrendering more than 500,000 to the Nazi Holocaust.

“That history did not bury us [after World War I] is down to a few exceptional statesmen [like] Gov. Miklos Horthy,” he said. “That fact cannot be negated by Hungary’s mournful role in World War II.”

The Federation of Jewish Communities in Hungary and the World Jewish Congress said in a joint statement that they were “concerned” about the tone of such electioneering.

Israel’s ambassador to Budapest requested a clarification of Orban’s words, which Jerusalem found “troubling.” Prime Minister Benjamin Netanyahu is due to pay a visit to Budapest in mid-July, the first by a sitting Israeli prime minister.

Some analysts said Orban’s new hardened tone signaled a change in his politics and could define his upcoming election campaign as he seeks reelection for a third consecutive term.

Orban’s Fidesz is a runaway favorite to win the 2018 elections, commanding about a third of the electorate with Jobbik and the Socialists at about 10 percent each.

Jobbik received about a million votes in 2014, but risks big chunks of that electorate with its new, more moderate line.

“Jobbik’s move towards the center has upended the power base in the center and created a vacuum on the far right,” Zoltan Novak, analyst at the Centre for Fair Political Analysis said.

One indicator of that move is Orban’s harder line on immigration. Hundreds of thousands of migrants have entered Hungary via its southern frontier since 2015, though most have moved on westward to more prosperous parts of the EU. Budapest has erected a border fence along its southern frontier.

“It is very important to preserve our ethnic homogeneity,” Orban told a business forum February 28, repeating the phrase several times.

“For Orban to speak about ‘ethnic homogeneity’ in eastern Europe, less than 75 years after the Holocaust or 25 years after the Balkan wars, is a complete disregard of civilized norms,” Kreko told Reuters.

This week he used a national tour rallying against European Union plans for migrant resettlement quotas to criticize Muslim migrants.

“They don’t respect our culture,” he said. “They seek space for their own (culture), then suppress ours, then replace it. This is a matter of identity.”

Orban’s “ethnic homogeneity” idea has struck a nerve with a new militant right-wing political alliance, which will launch at a rally next week and may also enter the 2018 election race.

“Within decades the continent can implode demographically,” alliance leader Balazs Laszlo told the pro-Orban daily Magyar Idok. “Our ethnic homogeneity can come wholly undone… We recognize differences and defend our own race.”

A leader of the movement, Mihaly Orosz denied any cooperation with Fidesz.

“If they sense they can use our movement politically they might try but there is no intentional collusion on our part,” he said, adding their goal was to pass the 5 percent vote threshold to get into Parliament in 2018.

Kreko, the analyst, says the parallels clearly indicate a strategic squeeze: harvesting voters left behind by Jobbik from both the center of the political spectrum and the extreme right.

“Fidesz rejects all kinds of anti-Semitism, and does not cooperate with these politicians,” the party said in an emailed statement.