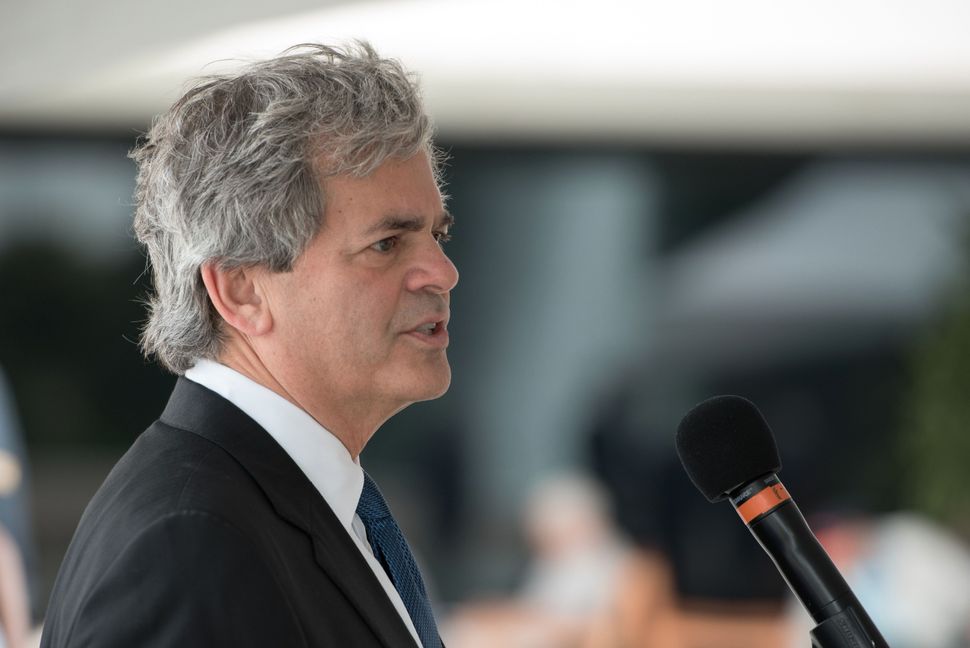 Life is good for Steve Adler, the mayor of Austin. The Texas capital is famous for its music scene, SXSW festival, and “Keep Austin Weird” sensibility — Adler revels in all of that. But his job isn’t easy. Increasingly, being the mayor of Austin has come to mean high-noon-style showdowns with the state and federal government on everything from immigration to bathrooms to funding for basic social services.

Tension between city and state is nothing new, but the Trump presidency has created an army of activist mayors. Adler, who dedicated his legal career to protecting civil and property rights from government overreach, is one of them. But when he’s not battling his own state house, the D.C.-area native is enjoying his adopted hometown.

“A lot of things changed in November,” Adler said in an interview with the Forward. “But not us.”

After the election, President Donald Trump delivered on his promise to come down on immigration, which spurred Austin to announce a policy of only notifying Immigration and Customs Enforcement (ICE) of illegal immigrants who have committed a violent crime. In return, Texas Governor Greg Abbott decided to withhold nearly $2 million in state funds.

Now, Adler says, 80% fewer immigrant women are willing to seek help from social service agencies in Austin, lest they become known to ICE. He’s received reports of families digging out hiding spaces in their homes in case ICE shows up to their door.

“That kind of imagery in my city is frightening to me,” Adler said.

Adler grew up in a tight-knit Jewish community, and though his home was not a religious one, he “felt something very special about the cultural continuity.” His father was a World War II vet who worked as a film editor for CBS, and consequently, the Adler house was one that valued political and social awareness, imbued with a desire to give back to the community.

He graduated from Princeton with a degree in public policy in 1978, the first in his family (along with his brother) to graduate from college. Next came law school at UT-Austin, picked because, in Adler’s words, “it was the cheapest law school in the country.”

The future Jewish mayor’s arrival in Austin coincided with the end of the first Jewish mayor of Austin’s term. Jeffery Friedman was enraged by the shootings of four student protestors at Kent State, and so in 1971, at the age of 26, he ran for city council, and was elected by a broad coalition of African Americans, Latinos, and UT students. Four years later, the long-haired, mustachioed Friedman was mayor, where he instituted many of the liberal reforms that forged Austin as the modern progressive bastion in the middle of Texas that it’s known as today. In the words of Michael Levy, founder of Texas Monthly, Friedman “introduced Austin city government to democracy.”

While Adler was studying law, he paid attention to the city that Friedman had created, one that went from the 42nd largest city in the country to the 11th during his term. He saw how the “ingredients were there for the city to grow and blossom” under Friedman, and how the young mayor had used them to fundamentally change Austin.

With that in mind, he went into civil rights and eminent domain work, starting at a large Austin firm before he struck out on his own.

He’d been chief of staff for State Rep. Elliot Shapleigh from 1997 until 2005, balancing his duties in Shapleigh’s office with his day-to-day at the firm. All the while, he served on the boards of GENaustin, a non-profit focused on empowering women; Ballet Austin, bringing greater community access to the arts; and of course, the Austin chapter of the ADL, which he helped to start. “He made ADL the go-to civil rights organization in Austin,” Kirk Rudy, an Austin real estate developer and Adler advocate one said of him. “He’s one of the leaders I’d follow to the ends of the earth.”

A Houston ADL gala happened to be the site of an early date with his wife, Diane Land. Land and Adler have three daughters now: : Karen, 32, Susan, 30, and Sarah, 24.

Then, in 2013, after years of civic involvement, he was part of a group that was searching for a candidate to helm the new 10-1 council system implemented by the city. One day, the focus turned to him.

Diane encouraged him to run when he brought up the subject. “He’s a public servant at heart,” she said in an interview with the Forward. “He complained about things for years, and now you have an opportunity to do something about it.”

Now that Adler’s running City Hall, he’s widely known for his soft manner of speech. After all, this is the man who declared this past April 18 “Austin Everybody Chill Out Day.”

“It’s important to maintain sort of an even keel when you’re in a community where advocates are so invested,” Adler said.

That mild manner doesn’t work for everyone in Austin. The left wants more passion from Adler on certain big issues, like gentrification. The technocratic Adler is sometimes seen as “very neutral, very rational,” according to Councilman Gregorio Casar. Adler, Casar told the Forward, will sometimes seek to slowly bring city residents along to an idea, rather than push. “He really believes he can explain things to folks when sometimes a soundbite is what is needed,” Casar.

Still, Casar, representing the most immigrant-heavy district in the city, fondly recalls Adler’s presence at a pro-immigrant rally last fall. They work closely together daily, and their disagreements come down mostly to style, rather than policy, he said.

The challenges of the Trump era are also forcing Adler to get more feisty. One of the subjects that gets him riled up is the state legislature’s disproportionate focus on “bathroom bills” as Texas public schools face mounting challenges. “We should be having a special session that actually deals with and resolves school finance reform, because that is the only way to materially reduce property taxes in this state,” Adler said at a press conference. “Instead it looks like we’re having a special session about a bathroom bill. Really?”

At the heart of these city-state conflicts are so-called preemption laws, measures set in place by state legislatures that deliberately contradict either planned or enacted city ordinances. Brooks Rainwater, director of the Center for City Solutions at the National League of Cities, recently said that these sort of preemption laws have seen an uptick in recent years, and he expects them to continue to proliferate. In Austin’s case, preemption laws passed by the state legislature would in fact overrule city ordinances, but some of those rulings have been successfully challenged in recent years.

Just a few weeks ago, Governor Abbott needled Adler even further. “Once you cross the Travis County line, Abbott said, “it starts smelling different…It’s the smell of freedom that does not exist in Austin, Texas.” Adler devised a retort that struck a neat balance between Austin adorkability and Texas chutzpah.