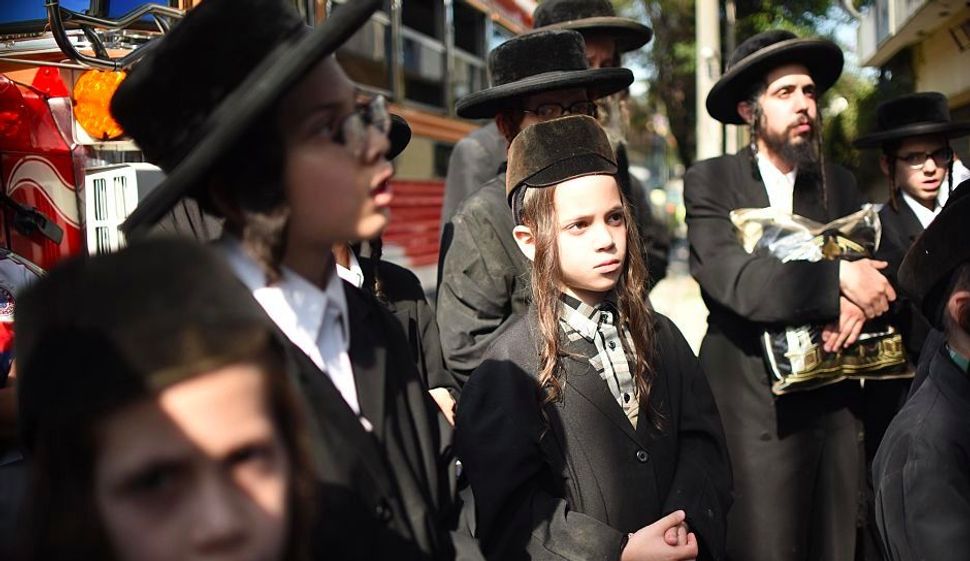 In the aftermath of the drowning of Rabbi Shlomo Helbrans, leader of the “Jewish Taliban” cult Lev Tahor in Mexico, the ultra-Orthodox press in Israel has been rife with reports regarding the location of his funeral and burial, and speculation as to which member of the cult will succeed him as leader of the reclusive group of 40 families believed to be in a remote southern part of Mexico, weeks after fleeing Guatemala, where they had lived for three years.

One ultra-Orthodox website, Kikar HaShabbat, published a short but disturbing video account of life inside the cult recorded in stealth by a 14-year-old member, describing severe abuse at the hands of men in Lev Tahor.

The blurred video showed only the boy’s hat, chest and sidecurls as he gives his testimony from a bowed position in halting Yiddish. The website bleeped the names of the Lev Tahor members he named.

“I wrote down on a piece of paper all of the things I want to talk about,” he continues. “Bad things are happening here. First, I want to tell about XXXX. He is a bad teacher. He does bad things to children. He hits children, kicks them and does other bad things.”

The boy continues to charge that another member of the group “killed a baby and another man. He hits and kicks all of the children.” He added that the men he named “undressed me and beat me and kicked me many times. And did bad things to me many times. At first, I thought they were good Jews. But then I saw they were bad people.”

Another ultra-Orthodox website, B’Hadrei Haredim, published an interview with a Philadelphia rabbi who said he was in touch with two Lev Tahor members in Mexico. He denied there was abuse in the cult, saying only that they had a “strict regime.” The rabbi told the story of Helbrans’ death, saying that on Friday he was at a river and slipped, hit his head on a rock, was carried away by the current and lost consciousness, and that attempts by his followers to rescue him had been unsuccessful.

The rabbi said Helbrans’ body was recovered by Mexican authorities and examined, but no autopsy was performed. Fearing that the Israeli government would intervene and bring Helbrans’ body back to Israel, the rabbi said, Lev Tahor members turned to the mayor of Guatemala City, where they had lived previously, asking him to request the release of the body from Mexico for burial in Guatemala. The rabbi said the entreaties had been successful and that Helbrans had been buried in Guatemala.

The group, the rabbi said, had only crossed the border to Mexico three weeks ago, after three years of living in multiple locations in Guatemala. They left, he said, because they feared apprehension by Israeli authorities. Families of Lev Tahor members have been pressuring the Israeli government for years to assist them in repatriating their relatives, claiming they are being drugged and abused, and that underage girls were regularly married off to older men. The group fled Canada three years ago, after authorities there investigated allegations that Lev Tahor was physically and sexually abusing children, and removed some of them from their homes.

A report in the Yeshiva World News said Helbrans would be succeeded as leader by Rabbi Meir Rosner, reportedly the head of Lev Tahor’s yeshiva.

In a 2014 story on the group in the Canadian press, a former Lev Tahor member charged that Rosner had taken his money, claiming that he wasn’t capable of managing his own finances.

Another story, written the previous year, investigated the cult’s finances, and quoted Rosner vehemently denying that the millions of dollars flowing through the group’s accounts went to line the pockets of its leadership while rank and file members lived in poverty. Two of Helbrans’ sons are with the group, while a third, Rabbi Natan Helbrans, remained in Canada with a breakaway faction. This week, an Israeli ultra-Orthodox website in Israel, Haredi 10, reported that Natan Helbrans’ followers were “preparing to crown” him as his father’s successor and invited members of the group in Mexico to abandon the leaders who were at his father’s side and “come to Canada and accept his authority.”

The younger Helbrans said he would rebuild the community on a more “open, normal” and “successful” model that would be less strict and “open it to all those who seek God,” indicating that while the group would remain strictly Orthodox he would do away with the Taliban-style, burka-like black robes worn by women that earned the group its nickname.