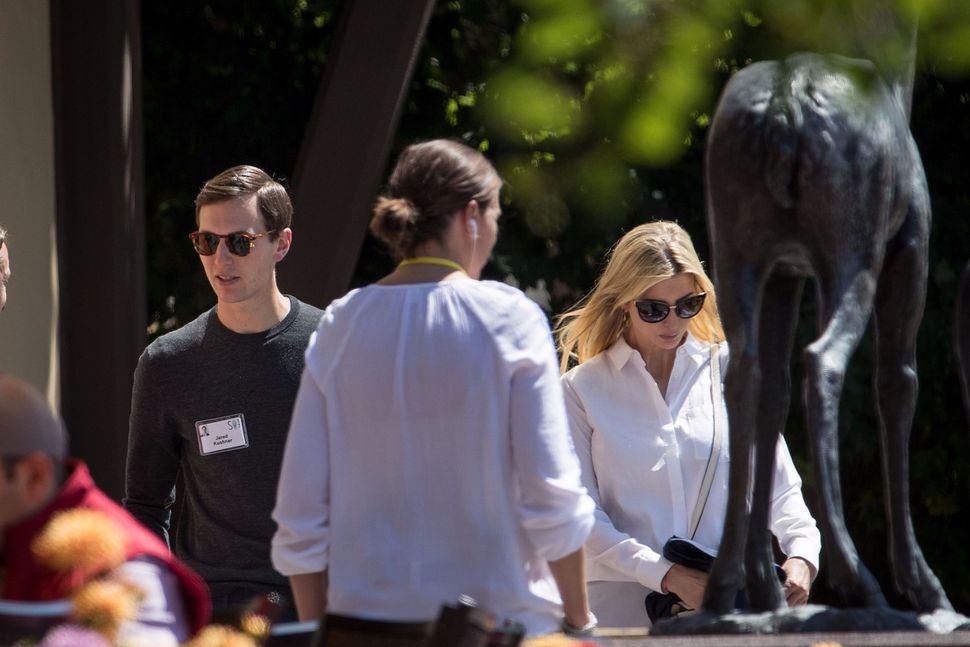 At the dawn of the Trump administration, son-in-law Jared Kushner seemed to float above the maelstrom.

For establishment figures on both sides of the political aisle, the babyfaced millionaire, who dabbled in newspapers and took over his jailed dad’s real estate business before becoming an adviser to his presidential father-in-law, was seen as a moderating force.

Kushner would hold the line on key issues, it was thought, and balance the radicalism of Trump’s nationalist, anti-establishment base.

That fantasy has evaporated in recent weeks. Kushner has become a key figure in the billowing Russia scandal, and turned out to be the member of Donald Trump’s inner circle advocating the most aggressive defense of the president — even more so than the pugnacious Steve Bannon, who is often portrayed as his rival.

Now, Democrats are turning their sights on the onetime golden boy. Led by Jewish lawmakers. Florida Democrat Debbie Wasserman Schultz has made two attempts on the floor of the House of Representatives to strip him of his security clearance. And Sen. Ron Wyden, also a Democrat, has said that Kushner should not “be allowed to handle national security matters and materials.”

“He’s becoming more of a target because we’re finding out more information about bad things he might have done,” said Aaron Keyak, a Democratic Jewish consultant and managing director at Bluelight Strategies. “There was no reluctance to go after him. It’s just this information was new information.”

“Jared Kusher was mostly a private citizen before going into government,” Keyak said. “We knew less about him.”

We know, for instance, that he has been forced to refile his federal application for security clearance three times, according to CBS, adding more than 100 names of foreign contacts.

We also know that, according to McClatchy, investigators are looking at the Trump campaign digital operation that Kushner ran, and whether it offered assistance to Russian operatives.

Aside from being targeted by the flurry of revelations, Kushner has adopted an increasingly aggressive stance against President Trump’s perceived enemies. That puts more of a bullseye on him, analysts say.

According to Politico, he is pushing for a “a more robust effort from the [White House] communications team” in defense of the Trump Tower meeting. That follows on his successful advocacy for the firing of former FBI director James Comey.

Meanwhile, according to The Wall Street Journal, a tiny startup funded by Kushner’s brother was invited to a White House roundtable with some of the biggest tech companies in the world.

Kushner has been mum amid the gathering storm. He and his wife, Ivanka Trump, decamped for Sun Valley at the end of the week, to attend a meeting of billionaires hosted by Microsoft’s Paul Allen. Fellow attendees included Rupert Murdoch, Sheryl Sandberg and Jeff Bezos. Photos of the event showed Kushner wearing a laminated name tag.

Back in Washington, however, calls are mounting for his effective removal from power. House Minority Leader Nancy Pelosi took aim at Kushner on Thursday, according to Politico.

“His security clearance must be revoked immediately,” she said.

That would mean the effective end of Kushner’s authority. His many roles within the administration — as a senior adviser to the president, and director of the newly formed Office of American Innovation, among others — would be impossible to carry out without that clearance.