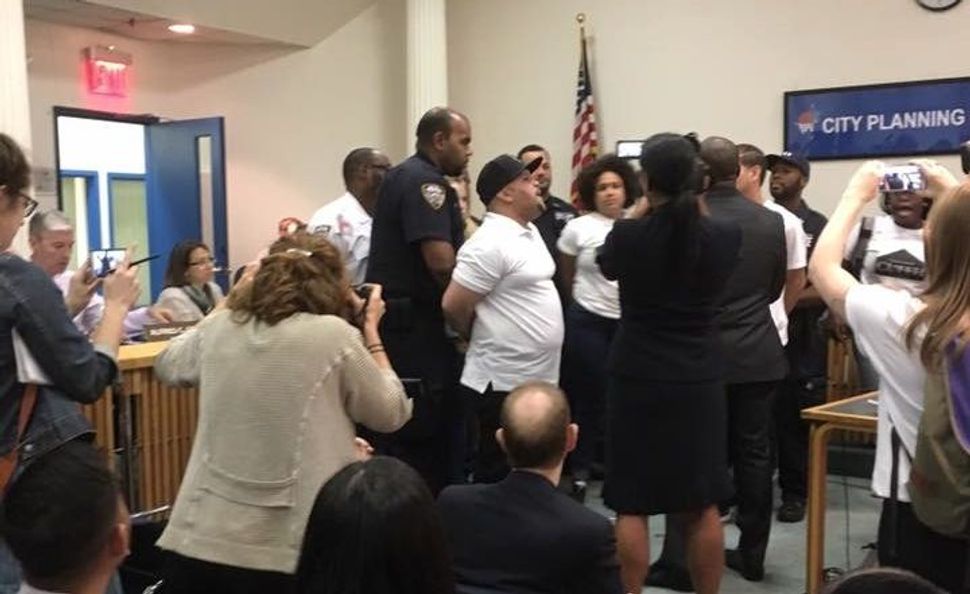 Protesters chanted loudly as police led them away from a public hearing this week on rezoning a portion of Brooklyn’s Broadway Triangle to make room for a controversial new development on a rare slice of available land in the booming borough.

Seven demonstrators were ultimately arrested for trying to shut down the New York City Planning Commission’s review of the 1,146 unit project from the Rabsky Group, a controversial north Brooklyn developer led by two ultra-Orthodox men. The project, which has turned into a turf war of sorts etween Latinos and Hasidic Jews, is proposed for two vacant lots once owned by the pharmaceutical giant Pfizer.

“With all due respect, on behalf of hundreds of people that came out today to this gathering, we firmly object to this hearing even taking place,” protest leader Juan Ramos told those gathered.

The dramatic scene marked the latest flare-up in an ongoing effort to block the largest housing development in the Broadway Triangle’s history.

The Triangle, formed by the intersection of Williamsburg, Bushwick and Bedford-Stuyvesant, contains some of the last unbuilt land in north Brooklyn. That land is being eyed by four competing population groups: blacks, Latinos, Hasidic Jews and high-income families pushing deeper into Brooklyn in search of less-expensive real estate.

Opponents of the plan argue that it does not have enough affordable housing — about 25% of the units will be labeled “affordable.” Many worry that even with the “affordable” units available, floor plans with three or more bedrooms will skew the winners in the housing lottery to Hasidic Jews, who tend to have large families. The Rabsky Group has repeatedly refused calls to disclose the bedroom mix of the proposed development.

Following a scathing review from Brooklyn Borough President Eric Adams, the rezoning plan is now in the hands of the City Planning Commission, which has until the end of October to make recommendations. While the plan faces vocal opposition from Councilman Antonio Reynoso, who represents Bushwick and parts of Williamsburg, Councilman Stephen Levin, who represents nearby neighborhoods of Williamsburg and Greenpoint, is backing the plan.

“We get too bogged down in that zero-sum mentality that everybody loses,” Levin said at a Community Board 1 meeting he board voted in favor of the zoning changes.

Protesters successfully shut down a July 10 public hearing on the Rabsky development at Borough Hall in downtown Brooklyn.

“With all due respect, on behalf of hundreds of people that came out today to this gathering, we firmly object to this hearing even taking place,” Juan Ramos, of the BTCC, told those gathered.

In the wake of the aborted hearing, Eric Adams wrote to the City Planning Commission demanding that the Rabsky Group adding 21,300 square feet of affordable housing to the project. Adams also recommended that the Rabsky Group be compelled to pay for expanded access to the subway stops closest to the Triangle, due to the added strain that its tenants would bring to the stations.

Jesus Gonzalez’s organization applauded Adams’ recommendations, but stressed that the plan was too flawed to be reviewed at all.

“This plan is anti-Black and anti-Latino and we are appalled that this project is still even being considered,” CUFFH wrote in a statement.

Rabbi David Niederman, director of the United Jewish Organizations of Williamsburg, a not-for-profit that supports the Rabsky project, has branded as anti-Semitic the protesters’ concerns that multiple bedrooms will favor Hasidic Jews in a lottery.

At the City Planning Commission meeting on Wednesday, commissioners subjected the Rabsky Group’s lawyer, Ray Levin, to intense questioning about the bedroom mix of the building and what would happen if Rabsky Group sold parcels of the rezoned area to other developers.

Not everyone was pleased with the answers. One commissioner told Levin, “You’ve given us nothing to vote on.”

Once the City Planning Commission makes its recommendation, the rezoning proposal will go to the City Council’s Land Use Committee, of which Reynoso and Stephen Levin are both members.