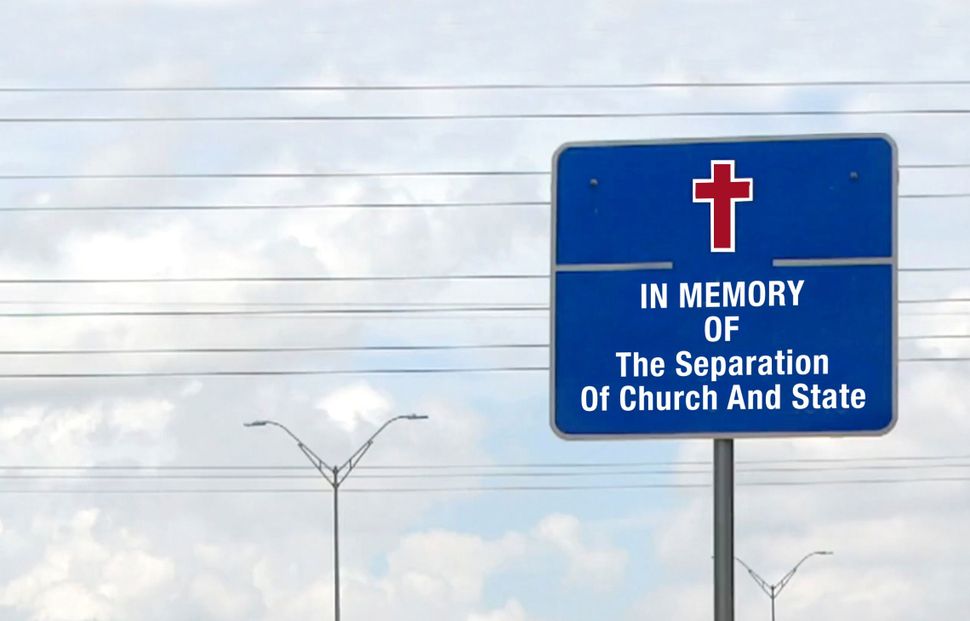 They say that everything is bigger in Texas. Not so for the separation of church and state.

In that great state, the families of motorcyclists killed in traffic collisions can pay a fee of $350 to have a sign with their loved one’s name on it erected it at the scene. After one year, the sign is taken down and the families are allowed to keep it.

Every sign is required to feature a red, Christian-style cross on top.

“It’s something of a myth, the separation of church and state in the United States,” said Walter Buenger, chief historian of the Texas State Historical Association. “It is especially true since about the 1950s in a place like Texas.”

The law stipulating crosses on roadside memorials was passed in 2011. This summer, Texas lawmakers are grappling with several other bills that experts say have religious backstories. The most well-known item is the so-called “bathroom bill,” which would restrict the kinds of bathrooms transgender individuals could use in public buildings and schools. Buenger said the bathroom bill “clearly has religious overtones.” But state lawmakers are loath to admit it.

“There’s a kind of move to use Christian symbolism in public spaces, and because the folks who are doing it are mindful of church-state separation issues, they will deny that there is any sectarian content to the symbols,” said David Brockman, nonresident scholar of religious studies at Rice University’s Baker Institute for Public Policy. “But I find that disingenuous.”

In recent years, attempts by Texans to impose Christian symbolism in public spaces have included a West Texas sheriff putting a cross on police vehicles and the placement of a large Ten Commandments monument on the grounds of the state capitol. The case of the Ten Commandments went to the Supreme Court in 2005, where the justices ruled 5-4 that the monument “conveyed a historic and social meaning rather than an intrusive religious endorsement.”

The motorcyclist memorial sign bill, authored by Rep. Larry Phillips, included the cross requirement from the get-go. Phillips, whose district voted overwhelmingly for Donald Trump in last year’s election, told the Austin American-Statesman that the cross was the idea of ABATE, a not-for-profit motorcyclist advocacy group.

“If that’s not a recognized symbol among all cultures of the biking community and it’s representative of a religious symbol, then it needs to be modified in some form or fashion to let those of other faiths or no faith have a symbol to represent their loved ones,” Phillips said in July.

David Dobyns, state coordinator for ABATE in Texas, told the Austin American-Statesman that the group’s riders didn’t think of the red cross as a religious symbol.

“I don’t know really why we use the color we do,” he said. “That’s just our signature, I guess.”

Since its inception in 2011, the TxDOT program has placed over 40 memorial signs on roads and highways throughout Texas. While the signs may bring comfort to the loved ones of motorcyclists killed by negligent drivers, they do not make any mention of motorcycles or traffic awareness. TxDOT’s executive director has called the red crosses “a nonsectarian symbol of death,” and not an endorsement of Christianity.

“Basically, the state of Texas is saying you have the choice of purchasing a memorial sign that has a cross or not purchasing a sign, and from our perspective that could constitute a case of religious coercion,” Barkey said. (A spokesman from TxDOT said that there are no ongoing legal challenges to the memorial sign law, and no other traffic signs that depict religious symbols.)

“The ADL believes that separation of church and state is the key to religious freedom in our country,” he added. “Certainly we don’t want to see violations.”

The Texas legislature is currently halfway through a special legislative session called, in part, to address several bills that are popular with Texas’s religious Christian population. The 30-day session was essentially forced by its lieutenant governor, Dan Patrick. Patrick is a vocal proponent of the “bathroom bill,” and has said the bill is about helping women feel safer. Joe Straus, the Jewish speaker of the Texas House of Representatives, successfully blocked a vote on the bill during the Texas legislature’s regular session.

Also on the agenda are bills to restrict insurance for non-emergency abortions, to further regulate the “Do Not Resuscitate” order procedure and to provide government subsidies for private school tuition.

Barkey said that these controversial legislative battles are part and parcel of the blurring of the line between church and the Lone Star State.

“All these things are sending a message of religious exclusion to people who are not affiliated with the Christian faith,” Barkey said.

Brockman noted that although more than three-fourths of Texans are Christian, the demographics may be shifting in favor of secularism. According to the Pew Research Center, 18% of Texas adults identify as religiously unaffiliated — and nearly half of them are under 29.

“When we have a growing non-Christian and perhaps nonreligious population in Texas, I foresee more sensitivity to church-state separation in the future,” Brockman said. “But right now it doesn’t seem to be an issue for a lot of Texans.”

“Christian symbolism is part of the wallpaper here in Texas,” he added.