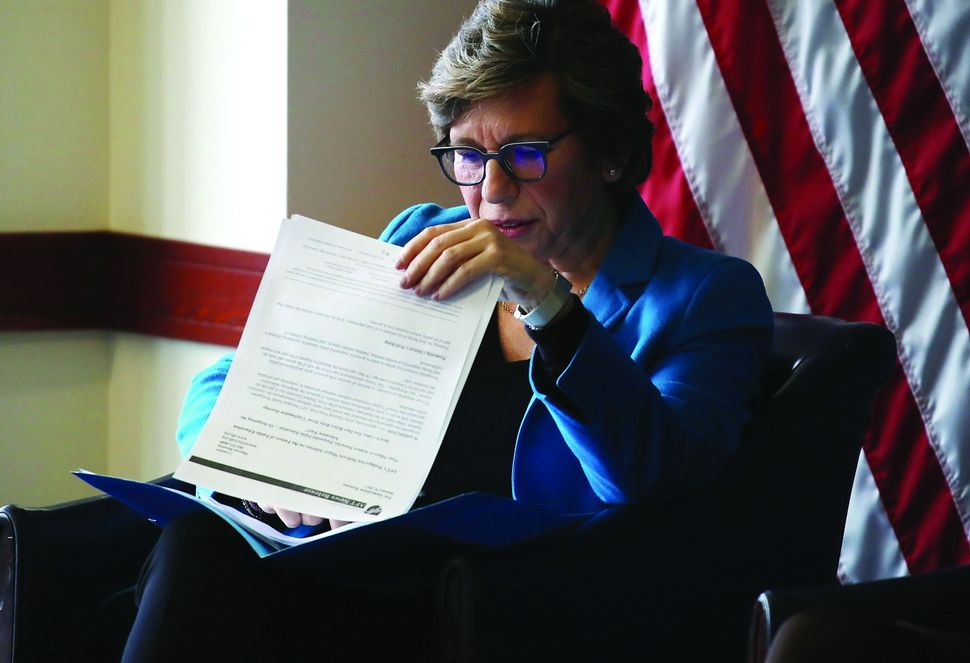 Randi Weingarten has held leadership position in teachers unions for almost three decades, but in the coming school year she faces perhaps the most daunting challenge of her career.

The 2016 election resulted in an administration whose views are almost diametrically opposed to everything Weingarten, as head of the American Federation of Teachers, believes in. The Trump administration’s strong anti-union strand and its commitment to open up schools to competition, personified in Secretary of Education Betsy DeVos and her school choice crusade, have put the AFT and its 1.6 million teachers on the defensive.

Weingarten, 59, was born in and raised in New York and told Forward staff writer Nathan Guttman that she sees herself as a “very religious” Jew. She is looking at the upcoming school year with a mix of concern and determination — concern over the fast-moving policy, budget and legislation changes aimed at challenging public schools’ status as the premier provider of education for American children. Her determination, she says, draws its power from a groundswell she feels among teachers and parents committed to defeating these changes.

With the school year just around the corner, what are the main challenges you’re facing?

We have a secretary of education who actually doesn’t believe in public education, and that’s a huge challenge. Our goal is for economic and education opportunity for all kids, and when 34 states still spend less on public education than they did in 2008, at a time when Wall Street is at its highest level ever, we have a problem with priorities in this country.

When we see Trump and DeVos fighting public schools, when we see them promoting budget cuts in states like Florida and Michigan, or in the federal budget, where they’re calling for $9 billion worth of budget cuts and diverting some additional funding to school privatization, that’s just wrong. So, I think there’s a big, big issue walking into this year, and it is ensuring public education as foundation toward democracy andfighting for the investment that is needed to help all kids.

Do you think that in this first year of the Trump-DeVos administration, students and teachers will already feel a difference?

I don’t think vouchers should be discriminatory, I don’t think for-profit schools should lack transparency and lack accountability. She and I disagree ideologically about that, and I think the evidence should rule what happens there, and I think the First Amendment should rule what happens there, but regardless of the ideological difference about private school vouchers — me believing that they don’t work and that they shouldn’t discriminate, or things like that — there should never be and there never has been a secretary of education who didn’t believe in public education and who spent her time in Washington or in Lansing or in Tallahassee undermining public education. That they’re actually trying to end public schools as we know them, just as they’re trying to in the [Environmental Protection Agency] to deny climate change, that’s the big difference between this year and any other year, including when Ronald Reagan was president.

How do you see the role the Jewish community is playing in this battle? Many in the community are supportive of your point of view and of unions in general, but on the other hand you have many, especially in the Orthodox community, who welcome DeVos’s reforms.

I understand that there are some in the Jewish community that see what DeVos is doing as giving them funding for Jewish schools and that this is a way of getting Jewish schools funded, and I disagree with them. I understand how seductive it is in the short term, but I would ask people to think about the long term.

I would actually argue that over the long term, for our long-term survival as a people, we need to have a thriving democracy in the United States that understands the separation between church and state and that fights against the establishment of a religion and fights for the free exercise of religion. As understanding as I am about the short term, that when somebody is offering money for school and it reduces your out-of-pocket costs, I understand that it is seductive in the short run, but in the long run we need a thriving democracy for the Jewish people to thrive, and I think in the long term that is more important.

You found yourself this year criticizing the Israeli government for its attempt to limit free speech on college campuses. Why did you weigh in on this?

For the same reasons. I’m opposed to [boycott, divestment and sanctions], and I spent a lot of time in Israel. But having the right to speak and to voice one’s opinions is essential. Even though I completely disagree with DeVos we invited her to our schools. We’re educators, we want to educate, we believe in education, but we also believe in speech and that speech is absolutely imperative. And so we thought that what the Israeli government was doing in its push toward censorship, frankly, was very counterproductive. It goes against the notion of democracy and free speech, but it was also very counterproductive.

What is your message to millions of students as they go back to school?

I want to tell them that opportunity starts with schools and that we fight very hard to make schools places of joy, places of creativity, places of innovation, places of relationship building, places of learning skills and knowledge, and places where kids feel safe and cared for and places of unlimited possibilities and unlimited joy.

Every beginning of school, regardless of what the climate is in a country, schooling creates opportunity and a future for the millions of kids that we touch. And so, I always love the beginning of school, I always love the possibilities that it opens, and I just wish for every school kid, regardless of what school they go to, that they have a wonderful year of endless possibilities and endless joy.