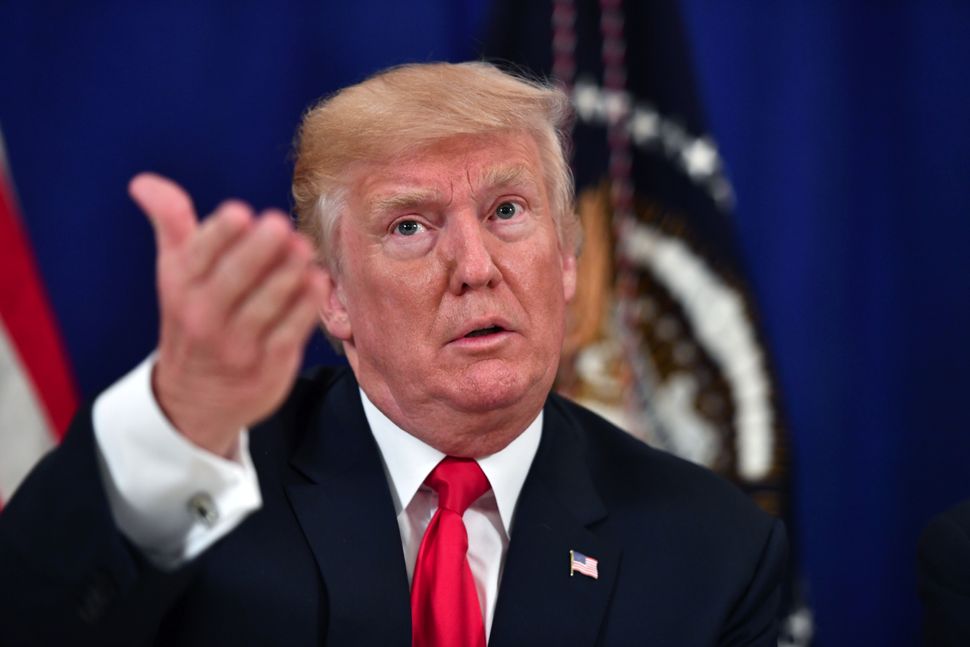 President Donald Trump responded to the news of brawls at a white supremacist rally in Virginia by condemning violence “on many sides.” The language was oddly vague — and celebrated by his white nationalist base.

“He didn’t attack us. He just said the nation should come together. Nothing specific against us,” wrote Andrew Anglin, the founder of the neo-Nazi website Daily Stormer. “God bless him.”

For Anglin and others, Trump seemed to be telegraphing tacit approval.

“He knows in his gut that we were trying to hold a peaceful event,” said white nationalist Richard Spencer in a podcast.

So, when Trump finally — under mounting pressure from all parties — condemned white supremacists in clear language on Monday, the message was already clear to his base.

“Trump delays condemnation of bigotry and violence just long enough to get the message that any condemnation later is being made under pressure,” said Chip Berlet, the author of “Right Wing Populism in America.”

“It is a sly messaging technique that gives him plausible deniability,” Berlet added.

Americans watched over the weekend as white nationalist groups marched down the street in Charlottesville, chanting anti-Semitic slogans and openly displayed the symbols of Nazi Germany and the Confederacy. Counter-protestors, including antifascist activists, openly brawled in the street. The scene further devolved into violence when a speeding car crashed into other vehicles on a crowded street, causing the death of a woman and injuring at least 19 other people.

Trump’s tepid disavowal of violence on “many sides” was part of what some call a familiar routine for the president: first signal tacit approval to the white nationalists who rally around him, and then — only after overwhelming pressure — distance himself from this far-right base.

For example, Trump’s public condemnation of former KKK head David Duke came after the elder white supremacist had supported him for many months. “David Duke is a bad person,” Trump said in March of last year. “I disavowed him. I disavowed the KKK.” (Duke, for what it’s worth wasn’t bothered by it and has continued to celebrate Trump as a boon to his cause.)

And, only after his election to the office did Trump disavow the “alt-right,” the mostly-online white nationalist movement that boasted it had “memed” the president into office through an aggressive online campaign. In a group interview with the New York Times, Trump said he did not intend to “energize” the alt-right. “I don’t want to energize the group, and I disavow the group.” (“Alt-right” figureheads like Spencer, too, have continued to champion Trump as their, perhaps flawed, candidate of choice.)

Given this pattern, it’s unlikely that Trump’s harsher criticism on Monday will impact the white nationalists who see him as a champion.

“Racism is evil — and those who cause violence in its name are criminals and thugs, including KKK, neo-Nazis, white supremacists, and other hate groups are repugnant to everything we hold dear as Americans,” Trump said in Monday’s harsher condemnation, delivered at a White House briefing. “Those who spread violence in the name of bigotry strike at the very core of America.

So far, the pattern appears to be holding. The white supremacists like Anglin and Spencer are standing by Trump.

“He waited to respond because his first response was accurate,” Anglin said, noting the lag time in Trump’s harsher words. “Trump only disavowed us at the point of a Jewish weapon… So I’m not disavowing him. F*** the Jews.”

And Spencer, in a live-streamed press conference, said he didn’t see Trump’s words as outright condemnation, but rather meaningless platitudes.

“He didn’t condemn it, no,” Spencer said. “His statement today was more kumbaya nonsense… Only a dumb person would take those lines seriously.”

White nationalist William Johnson, who funded robocalls for the Trump campaign, told Talking Points Memo that Trump was referring to counter-demonstrators when he condemned racism.

“I am pleased with what Donald Trump said,” Johnson told the news site. “The only solution for the festering racism of this country is separation and the creation of a white ethnostate.”

Not all white nationalists appeared as dismissive though.

Duke had harsher words for the president, warning him to not alienate the “white Americans” who put him in office. “I would recommend you take a good look in the mirror & remember it was White Americans who put you in the presidency, not radical leftists,” Duke wrote online over the weekend.

Other white nationalist rallies are in the works, including a “Free Speech rally” in Boston over the weekend. Groups which were in attendance at the Virginia rally will also reportedly be in attendance, like Identity Evropa, a self-styled “Identitarian” group led by a man named Nathan Damigo.

Boston is already bracing for the event, which some fear could be a repeat of Virginia.