Was Jewish Antifa Caught Off Guard By Charlottesville White Supremacists? 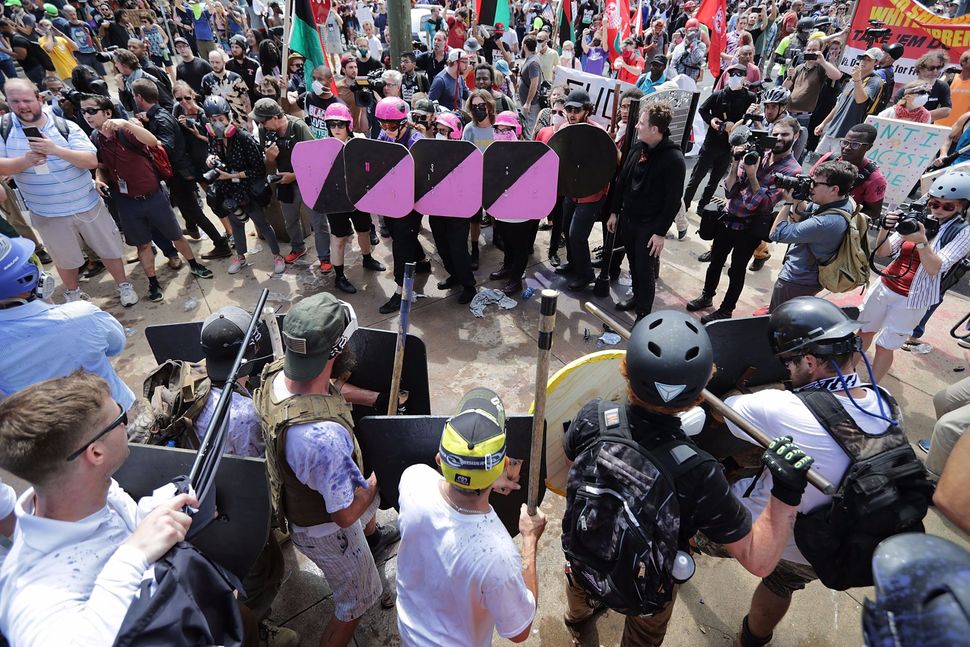 For Jewish protesters gathered at this month’s far-right rally in Charlottesville, facing off with white nationalists meant coming face to face with groups that call openly for their murder.

“First stop Charlottesville, next stop Auschwitz!” white supremacists shouted, brandishing swastika flags and hoisting their arms in the Nazi salute. “Get in the showers!”

“For weeks, I was debating whether or not anti-Semitism was central to the American formation of white supremacy,” said Bethany Koval, a Jewish college student and activist from New Jersey. “I was emotionally unprepared for many of those traditional Nazi chants in Charlottesville.”

Koval said that before Charlottesville she saw white supremacy as primarily targeting or exploiting African Americans and other people of color. “I struggled to see how Jewishness fit into that equation,” Koval said. “Then came the tiki torches.”

The country was transfixed by Charlottesville as a white nationalist rally sparked violence that killed one counter-demonstrator.

For Jewish left-wing activists, the rally was both a wake-up call and a cautionary tale. They discovered the far right is far more fixated on Jews than they thought, as demonstrated by the virulent anti-Semitic focus of the march. And their white nationalist adversaries are much more united, armed and prepared for violence than anyone suspected.

“You have some people on the left who can’t see how we are being victimized by Nazis or how we’re targets of their attacks on the same level as black people or immigrants or Muslims,” said Daniel Sieradski, a Jewish antifa activist based in New York. “Charlottesville was a wake-up call to a lot of people.”

There are many Jewish activists in the loosely organized antifascist, or antifa, movement. While Jewish protesters might be more aware of the anti-Semitism of the “alt-right,” before Charlottesville, some on the left dismissed the anti-Semitic strains as peripheral to the white nationalist group.

In white supremacist circles, Jews are typically cast as enemies of the white nation. Figures like former Ku Klux Klan head David Duke, for example, decry Jews as a parasitic people that advocate for things like racial diversity or immigration simply to hasten the “genocide” of whites in America.

“The far right is well organized, their organization is much more aggressive,” said Spencer Sunshine, an associate fellow at Political Research Associates. “Many people on the left were surprised.”

Groups that identify as antifa have been physically confronting neo-Nazis, white supremacists and, in some cases, speakers who just pushed the boundaries of political correctness on college campuses across the country this past year.

Over the past year, a handful of loosely organized Jewish antifa groups have cropped up. There is the “Jewish Antifa” Facebook page, which promotes the Jewish history of confrontational protest, dating back to Europe. Then there is the allied group “MuJew Antifa,” a collaboration between Muslim and Jewish activists. And there are dozens of other individuals who are active from their own social media accounts. The Jewish Antifa page has fewer than 60 members, but the MuJu Antifa network boasts more than 2,000, one organizer said. Jews who identify as anti-facists could also be involved in groups like Black Lives Matter or other left-wing Jewish groups without belonging to one of these two antifa groups.

The rally last weekend was organized presumably to protest the removal of a Confederate statute, but the scene in Charlottesville devolved into open brawling in the street between white nationalists and counter-protesters, who both came out in the hundreds. One woman was mowed down and killed by a man who had marched with the “alt-right.”

White nationalists came prepared for the day. “Alt-right” websites heralded it as a turning point for their movement. Richard Spencer, perhaps the country’s best-known white nationalist, was billed as a headline speaker. Duke came with an entourage. Armed militias marched in formation; some groups hoisted up swastika flags and made the Nazi salute.

While antifa activists have been celebrated for standing up to white supremacists — and groups say they are attracting new members — others have condemned them alongside neo-Nazis for engaging in violence. Trump appeared to equate them with white supremacists, dubbing antifa the “alt-left” and saying “there’s blame on both sides.”

Videos of the street fights in Charlottesville show both left-wing and right-wing protesters throwing punches, and some antifa groups reportedly were also armed at the Virginia rally.

For sure, antifa’s approach marks a sharp break with mainline Jewish organizations such as the Anti-Defamation League. While the ADL has for decades monitored and advocated against anti-Semitism, it does not encourage confronting groups such as white supremacists head-on, nor does it do so itself.

Left-wing activists reject any equivalence between themselves and the “alt-right” and think the violence (or threats of violence) from the “alt-right” needs to be met with violence, too.

“One side is advocating for genocide,” said another Jewish activist who asked to remain anonymous for safety reasons. “The other side is trying to stop them from getting to the point that they could be in reach of power to carry out the genocide.”

Antifa activists provided few details about their tactics ahead. Unlike far-right figures today, who seem to revel in the spotlight, antifa is secretive about tactics and plans. When pressed on future actions, activists spoke in generalities, though still promising violence against their perceived enemies.

“Whenever neo-Nazis crawl into our communities, whether they come through rallies or elections, we will be on the streets to stomp the nasty bugs into nothingness,” Koval said.

Was Jewish Antifa Caught Off Guard By Charlottesville White Supremacists?