Is Bannon Planning ‘War’ On Jared And Ivanka — Or The Jews? 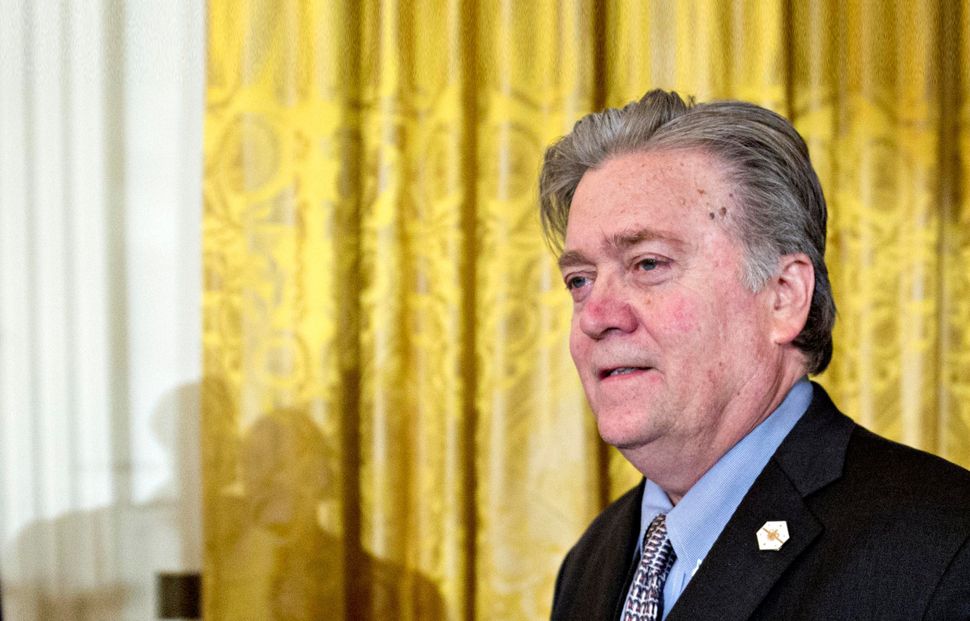 Steve Bannon is preparing to launch an all-out war against some of President Trump’s closest Jewish advisers — but he hopes to avoid it being framed as a fight against the Jews.

The ousted chief White House strategist is already back at the helm of Breitbart, the right-wing news website Bannon ran before joining Trump’s campaign. According to reports, Bannon is also in talks with Sinclair Broadcasting, America’s largest network of local TV stations. Joining the two platforms could give Bannon an even more powerful pulpit to go after “globalist” forces in the Trump White House and the Republican Party.

Bannon’s focus on Trump’s Jewish advisers has not gone unnoticed and Bannon himself seems to be struggling with the notion that his fight will be frames as a battle against Jewish influence. According to a detailed behind-the-scenes Vanity Fair report, Bannon ‘is especially galled,” according to one of his allies, at being called an anti-Semite.

In fact, he credits himself as being the one who had fought for moving the U.S. embassy to Jerusalem (as indicated on his famous whiteboard task list that was captured in a selfie by Rabbi Shmuley Boteach) and of holding a hard line on the Israeli-Palestinian conflict. While Kushner argued for postponing the embassy relocation and has spent his time shuffling between Jerusalem and Ramallah, Bannon refused to even enter the room when Trump met with Palestinian president Mahmoud Abbas, telling his aides he does not want to “breath the same air as that terrorist.”

Could a concerted effort by Bannon against Kushner, Ivanka Trump and Cohn be used to portray him as holding an anti-Jewish bias?

A Jewish Republican source said Bannon will seek to avoid that by stressing the non-Jews on his target list and Jews on his side of the battle line, including senior White House adviser Stephen Miller and Breitbart editor-at-large Joel Pollak.

It may also help to frame the battle as part of a larger struggle for the heart and mind of Trump and his right-wing base.

“For some, talking about New York globalists and about Jared and Ivanka will sound like code words for Jews, but for most people this is just part of the culture war inside the White House,” said the Republican source.

“We are so ridiculously amped up in our condemnation of anything and everyone we don’t agree with,” said Republican strategist Frank Luntz. “Steve Bannon is a hero to some and a villain to others. He’s likely neither of them, but that’s the image he wants to project, and the image his detractors want to promote.”

The Vanity Fair report illustrated just how focused Bannon is now on taking his fight against White House moderates to the public sphere. “We have a duty to the country to be the vanguard of ‘The Movement,’” Bannon reportedly told Breitbart staff on a conference call hours after news of his departure spread, singling out Ivanka, Kushner and Cohn, as well as “hawks” McMaster and Powell. Breitbart’s news editor Alex Marlow told Vanity Fair that Bannon “wants to beat their ideas into submission.”

The mutual animosity between Bannon and Javanka, a nickname describing Jared and Ivanka made popular by Bannon, is no secret. Kushner and Ivanka, alongside Cohn and others in the White House, were engaged in a battle of ideas with Bannon and his allies over the true spirit of the Trump presidency – a mainstream, fiscal conservative one, as the “New York wing” saw it, or a term defined by populism and economic nationalism.

Bannon had little respect for “Javanka,” telling his staff, according to the New York Times that the couple had “naïve political instincts.” A Bannon ally used clearer terms, telling Vanity Fair that Bannon called Kushner “a dope.”

But while the ideological rift between the two rivaling powers in Trump’s Oval Office had been clear ever since the inauguration, events in Charlottesville and Bannon’s ouster highlighted another undertone: the role played by Jared and Ivanka’s Jewish faith.

A Daily Mail report published over the weekend claimed that Ivanka and Jared “pushed out” Bannon from the White House, “because his far-right views clashed with their Jewish faith.” The report was based on unnamed Washington sources and was later denied by the White House as “totally false” but regardless of its reliability, Breitbart, already under the helm of Bannon, featured the story on its home page.

Breitbart’s editorial decisions in recent days offer a peek into the way Bannon’s war will play out.

The website featured a set of critical reports on General McMaster, on Kushner and on Ivanka. All share a similar theme: these advisers are incompetent and are advancing an agenda that contradicts that of Trump. Bannon’s challenge would be to intensify this attack line, without being viewed as singling out the Jewish members of the team.

Is Bannon Planning ‘War’ On Jared And Ivanka — Or The Jews?