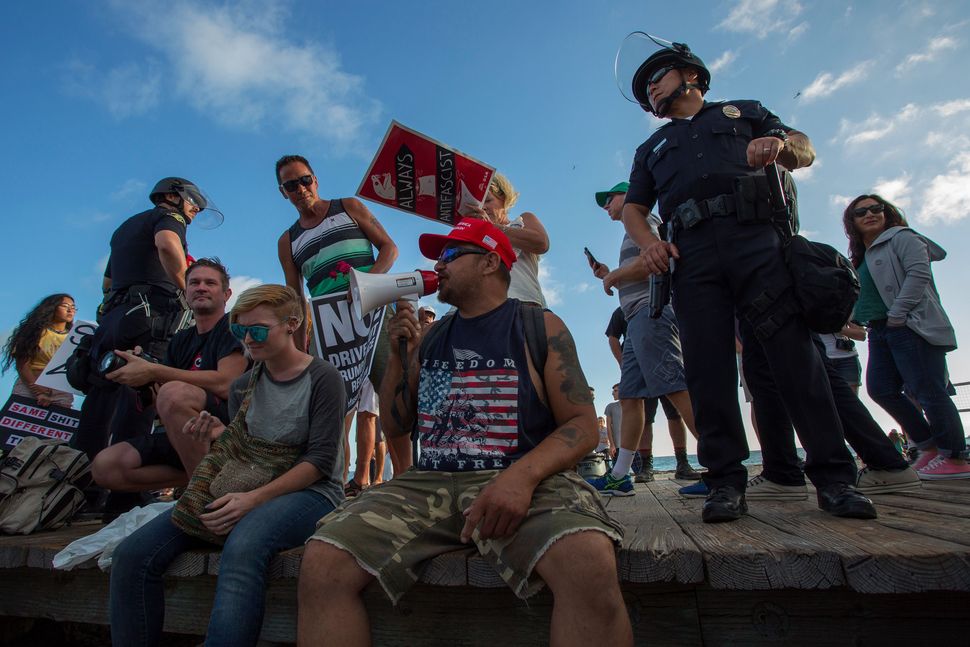 As hundreds of members of the white nationalist so-called “alt-right” movement head to San Francisco for a planned “freedom rally” this weekend and local counterprotesters prepare to confront them, police are bracing for the challenge of keeping the two sides apart and preventing Charlottesville-style violence.

“Doing nothing in the face of this weekend’s rallies is not an option,” read the lead editorial on the Bay Area’s Jewish community website, reflecting a flurry of activity by the region’s Jews in reaction to the rallies.

But members of the Jewish community disagreed on what precisely should be done.

“The Jewish community is split,” noted Sue Fishkoff, the editor of J, a local Jewish newspaper and website. Fishkoff said a substantial number of Bay Area Jewish leaders, including rabbis, and individuals were planning to join the counterprotests.

But at the same time, the majority of the “establishment” Jewish communal organizations – including the ADL, JCRC and Jewish Federation – are urging their membership to stay away from the potentially violent rallies and to attend peace and unity-themed alternative events instead, Fishkoff noted.

The Saturday rally will take place at Crissy Field in the Golden Gate National Recreation Area, known as the Presidio, after the Patriot Prayer group acquired a permit to hold the event on federal land there.

That rally will be followed by another right-wing gathering on Sunday called “No to Marxism in America,” set to be held at the Martin Luther King Jr. Civic Center Park in the neighboring city of Berkeley. Counterprotesters in the university town are planning to confront the group, which they believe promotes hatred and bigotry – six months after violent protests against alt-right speaker Milo Yiannopoulos rocked Berkeley, ending with the cancellation of his lecture.

Many of the “establishment” Jewish events are being organized by synagogues and Jewish organizations, in cooperation with other local groups. They are being held at different times and locations to the alt-right rallies, with the stated aim of countering them with a positive community spirit rather than adding fuel to ugly confrontations.

“Although some people will try to oppose and protest this display of hatred in the Presidio, I and many rabbis and community organizations are urging all members of our community to show their solidarity in other ways,” said Rabbi Sydney Mintz, whose historic Reform congregation, Temple Emanu-El, is hosting an Interfaith Gathering Against Hate Shabbat Service. “There are many opportunities this weekend for people to join together peacefully and lift up our collective voices for peace, for love, for justice and against hate,” and where participants can “focus on hope and the future of our country,” she added.

But Israeli-American author and Berkeley resident Ayelet Waldman said taking part in the counterprotest and standing firm against the white supremacists when they come to her city was “empowering” and important for her.

“I see protesting as an obligation and an opportunity,” she said, adding, “We in this community are obligated to show violent, hate-filled monsters that they have no place here.”

Fishkoff noted that many Jews were planning to attend both the interfaith and unity community events, as well as counterprotesting.

What was most important, she said, was showing that “the Bay Area doesn’t lie down in the face of right-wing marches and rallies.”

A renewed willingness to take to the streets against bigotry “is the one good thing” that has come out of the Donald Trump presidency, she added.

The greater San Francisco Jewish community has been directly affected by the atmosphere after Charlottesville, she noted. Fishkoff said that over the past week alone, “there were three cases of vandalism against synagogues – unusual for the Bay Area.”

Mintz said she wasn’t shocked “that white supremacists and Nazis have begun to march again and are staking a claim as a national presence. They have been here all along, but since November they have been given fuel for their fire.”

Area politicians, including San Francisco Mayor Ed Lee, have denounced the alt-right rallies as promoting hateful messages. In Berkeley, the city is handing out free signs for counterprotesters, reading “Berkeley United Against Hate.” Federal park authorities responsible for the Presidio have announced extreme measures in an attempt to prevent the kind of violence that took place at the “Unite the Right” rally in Charlottesville on August 12.

A long list of items are banned from the San Francisco event: As well as firearms, pepper spray and explosives, balloons, pets and selfie sticks are also forbidden.

Some of the counterprotesters plan to confront the alt-right with humor. A Go Fund Me project has raised more than $9,500 in order to “prank the Nazis” by putting an inflatable chicken that looks like President Trump on a barge in San Francisco Bay and floating it near the rally.

Those behind the “Trump Chicken” effort wrote on the fundraising site: “Organizers of the alt-right hoped to leave their rally with thousands of pictures of themselves and our iconic San Francisco bridge in the background, so we’re taking matters into our own hands and bringing our chicken to the sea to photobomb these glamour shots. They’re going to hate it.” The Trump chicken is well travelled, having recently made appearances in front of the White House and at the president’s rally in Phoenix on Tuesday.

San Francisco isn’t the only U.S. city gearing up for a tense weekend. A white supremacist group called Confederate 28 will be protesting in Knoxville, Tennessee, on Saturday against the removal of a monument that memorializes Confederate soldiers.

Confronting them will be a group called Knoxville Against White Supremacy, which put out a call on Facebook to “take a stand against these racist, neo-Confederate, white supremacists” with a defiant and confident message.

“Three times the KKK and Nazi folks tried to have rallies here in Knoxville. Those times they had a nationwide call and months in advance to prepare. Each time they were literally humiliated and laughed off the streets and left their own rallies early,” the post stated.