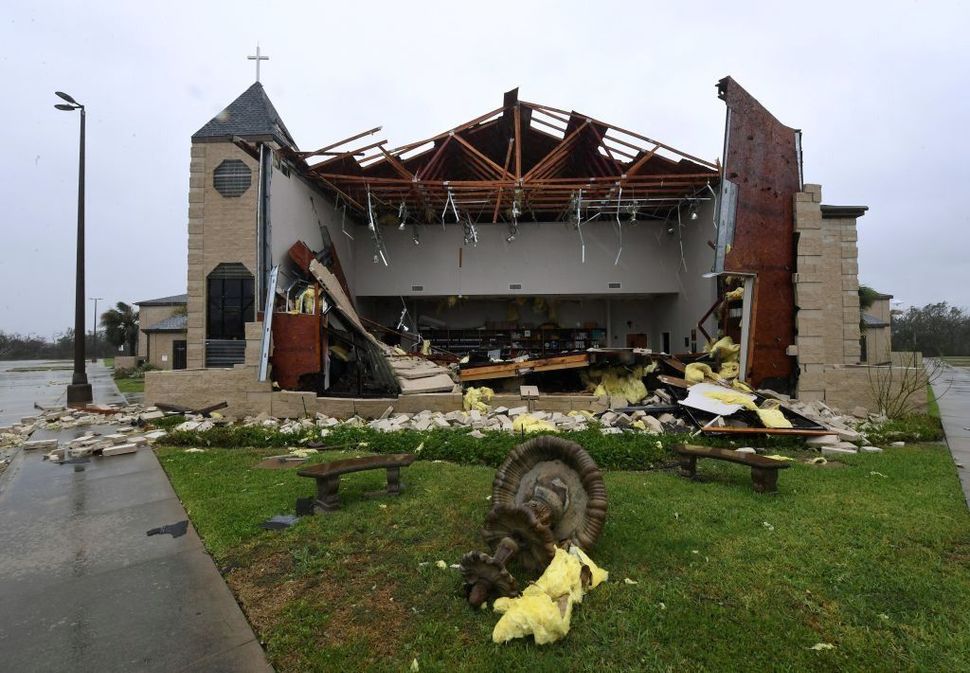 For Houston’s devastated synagogues, government funds to rebuild after Hurricane Harvey may not come.

The historic flooding that has brought death and terror to parts of Texas this week has damaged an untold number of houses of worship, including at least two synagogues.

Government rules could bar those holy sites from receiving government rebuilding grants that are available to other not-for-profits.

“We’re working on the issue,” said Nathan Diament, executive director of the Orthodox Union Advocacy Center, which has pushed for years to change the rule.

Diament said that conversations with the Federal Emergency Management Agency in recent days have led him to believe that the agency may be prepared to change its position on the issue.

“I would say that we’re optimistic that the Trump administration will have a different view on this policy than the Obama administration did,” Diament said.

FEMA did not respond to a request for comment.

The agency offers large grants to certain not-for-profits the aftermath of disasters to help with recovery. Houses of worship, however, are ineligible, under longstanding FEMA regulations meant to maintain church-state separation.

“Years after I first introduced legislation to ensure that houses of worship are treated fairly during natural disasters, our country has again been hit with a devastating hurricane, and no updates to the law have been made,” said Rep. Grace Meng of New York, one of the bill’s sponsors. “Houses of worship, which often provide much needed assistance during natural disasters, should not be denied federal disaster assistance from FEMA. It’s that simple.”

Now, the issue is set to resurface, as synagogues and other houses of worship face the aftermath of Hurricane Harvey.

The sanctuary of Congregation Beth Israel, a Reform congregation in Houston, was under three feet of water on Monday. The basement, where the building’s boiler and temperature control infrastructure are located, is also flooded.

“The first line of defense will be insurance,” said Bruce Levy, the synagogue’s president. “We’ve had experience with collecting on flood policies, and it’s not the easiest policy to collect on. They have some very challenging rules.”

If Beth Israel were a Jewish Community Center, or a Jewish hospital, it would be eligible for disaster aid under FEMA’s Public Assistance program. But as dozens of institutions discovered after Hurricane Sandy, those funds are unavailable to houses of worship.

A 2015 analysis by the Congressional Research Service, Congress’s in-house think tank, found that “there is support for the contention that [Meng’s bill] would violate the Establishment Clause” of the Constitution.

Rules around church-state separation are shifting, however. Diament noted a recent Supreme Court decision that allows the government to provide grants to religious institutions when those grants are meant for secular purposes.