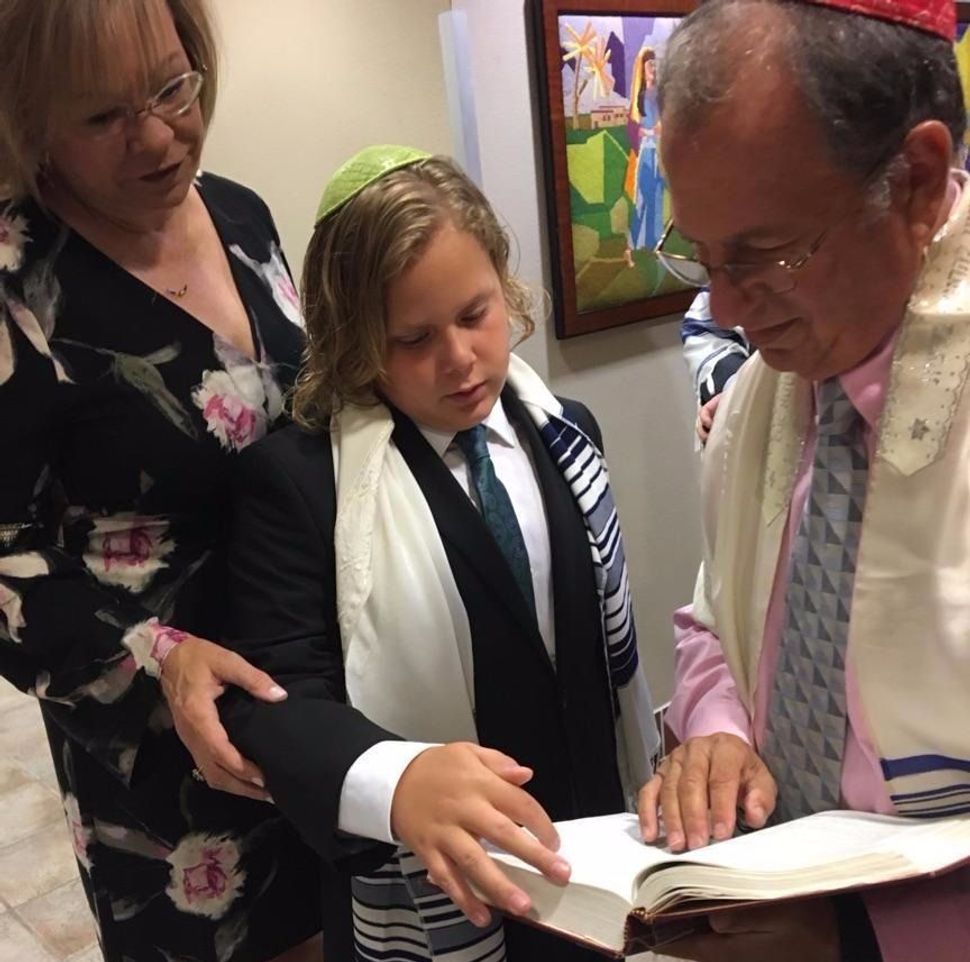 Adam Buchsbaum, flanked by his mother Laurie and Beth Yeshurun congregant Dr. Mark Gottesman, was able to have a Bar Mitzvah at a neighboring synagogue after his closed due to Hurricane Harvey. Image by Courtesy of the Buchsbaum family

Adam Buchsbaum had been preparing for his bar mitzvah for months. But with Hurricane Harvey lashing his hometown of Houston last Saturday, the boy’s temple closed its building and cancelled all services — including his coming-of-age ceremony.

The Buchsbaum family was devastated when they found out Congregation Beth Israel had closed — and resigned themselves to missing their son’s biggest day.

Adam was also upset when he found out, his mother said. But later that day, he put a brave face on the situation.

The family decided to go to another synagogue, Congregation Beth Yeshurun, in order to support Adam’s friend Finn Naggar, who was also having a bar mitzvah that day.

It turned out there were two services going on at the other synagogue that day. The Buchsbaums peeked their heads into the smaller service, where they were met by Dr. Mark Gottesman, one of the congregants.

The Buchsbaum family explained what had happened, and Adam showed him where he would have read from the Torah.

“Mark Gottesman immediately came over, said: ‘Let’s do this, we’re going to get you Bar Mitzvah,’” Laurie said. “I didn’t want to step on anyone’s toes, I was just overwhelmed.”

In the new minyan, Adam was able to read his Torah portion, his parents were given aliyot and congregants threw candy at the young man.

Gottesman explained to everyone gathered why it was so important to carry on with the tradition, despite the change of venue, not to mention the storm raging outside.

“This just shows that no matter what shul you go to, we are all one family, we are all Israel,” Gottesman said, according to Laurie Buchsbaum. “And we take care of each other.”

The highlight came when one of Adam’s friends entered the minyan to see Adam’s work. “His face lit up. He was just really pleased,” Laurie said.

The entire family then went into the main sanctuary, where Rabbi David Rosen, who by coincidence had married Buchsbaum and her husband Billy, called out the entire family of four and said how beautiful it was to have them there.

Along with being thankful to celebrate Adam’s bar mitzvah, the Buchsbaums are also among the lucky ones in Houston: their house has largely escaped damage from the storm that has dumped 50 inches of rain and counting on the city. Laurie Buchsbaum spoke to the Forward from a local church, where she and her daughter were volunteering by sorting donated diapers and other storm relief.

Words did not come easy as she pondered her family’s luck — and the generosity of others.