As Irma Looms, Florida’s Synagogues Are Spiriting Their Torahs Away To Safety 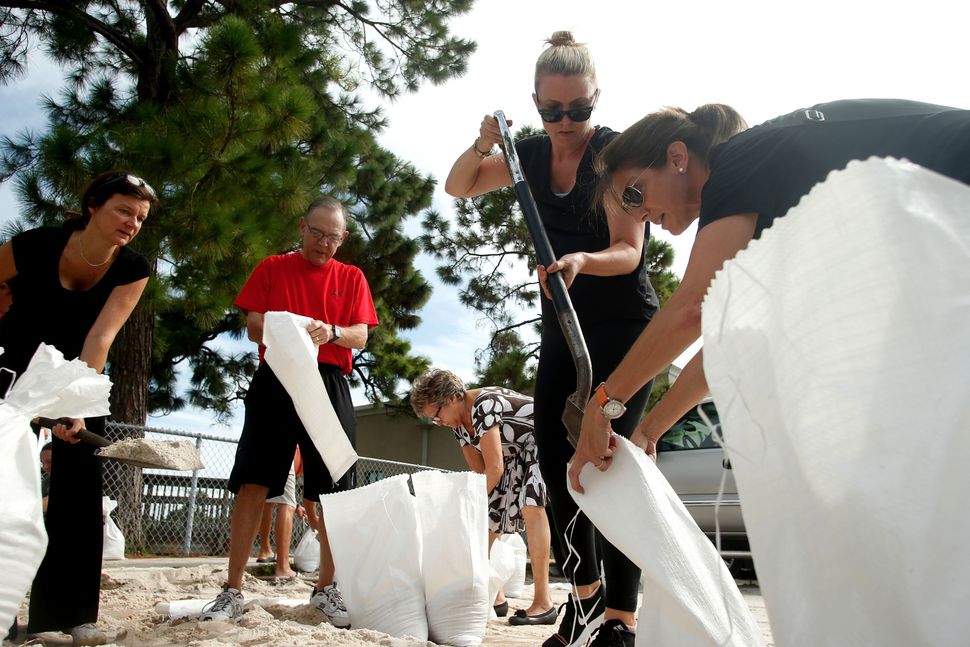 When Hurricane Andrew hit Florida in 1992, it tore part of the roof off Bet Shira Congregation in Miami, leaving the synagogue flooded for days. It took two weeks before electricity was restored, and two months until activity in the Conservative congregation could be resumed.

Andrew was a Category 5 hurricane, just like Hurricane Irma, which is now approaching the shores of Florida. Meteorological models show that Miami might be smack in the middle of the “cone” – the area expected to be hit hardest.

“There’s heightened anxiety in the aftermath of Harvey,” said Michael Balaban, president and CEO of the Jewish Federation of Broward County.

As his synagogue prepares for the storm, cancelling activities for the next few days and reaching out to community members to make sure they are safe and are taken care of, Rabbi Mark Kula of Bet Shira Congregation is also taking special care of the synagogue’s ten Torah scrolls, the oldest of which was made in the 1890s. When Andrew hit in 1992, the Bet Shira Torah scrolls were left in the arc and, perhaps miraculously, remained intact despite the surrounding devastation.

“It’s the strongest storm in 15 years and we’re right in the cone of direct hit,” Kula said. “The storm is expected to be right above us.”

Since Andrew, the synagogue has put in place a procedure aimed at making sure the scrolls remain safe even under extreme weather conditions. The scrolls are carefully wrapped in two layers of plastic, put in a van and taken to a local bank, where they are placed on a table in a walk-in vault built to sustain storms and floods. Other religious artifact and prayer books are covered in plastic and left in the synagogue. The last time the Torah scrolls were taken to shelter was during Hurricane Wilma in 2005.

“Our feeling is that we should be prepared sooner rather than later,” said Rabbi Alan Litwak of Temple Sinai, a Reform synagogue in North Miami Beach. His synagogue has already cancelled programs that might coincide with Irma’s arrival.

Litwak and his colleagues have wrapped their Torah scrolls and moved them into an enclosed room within the synagogue, where they will be safe from the storm. “We’ve done it a few times in the past,” said Litwak. “What gripped me was seeing what happened to the Torahs during Hurricane Katrina.”

The images from flooded Houston are still fresh in the minds of many Floridians as they prepare for the storm. The Federation’s emergency plan includes shutting down campuses and reaching out to seniors and vulnerable members of the community. “In most cases it’s about calming a person, letting them know we’re here for them,” said Balaban.

Florida, with its long history of confronting tropical storms, may be better prepared than other areas to protect holy sites and objects when severe weather hits. During Hurricane Katrina, which devastated New Orleans, Chabad rabbis rescued Torahs while treading in chest-high water. Synagogues also sustained severe damages during Hurricane Sandy, which hit New York and New Jersey in 2012, and Hurricane Harvey in Houston last month.

“There’s a greater than usual anxiety because of the severity and the trajectory,” Litwak said. “In some degree, people are extra prepared because of what happened in Houston.”

In Miami, Kula sent out a prayer to congregants alongside the email detailing emergency practices for the upcoming storm. Its message, he said, was that “the force of nature is powerful, but so is the force of the spirit. We are a community and we will take care of each other.”

As Irma Looms, Florida’s Synagogues Are Spiriting Their Torahs Away To Safety