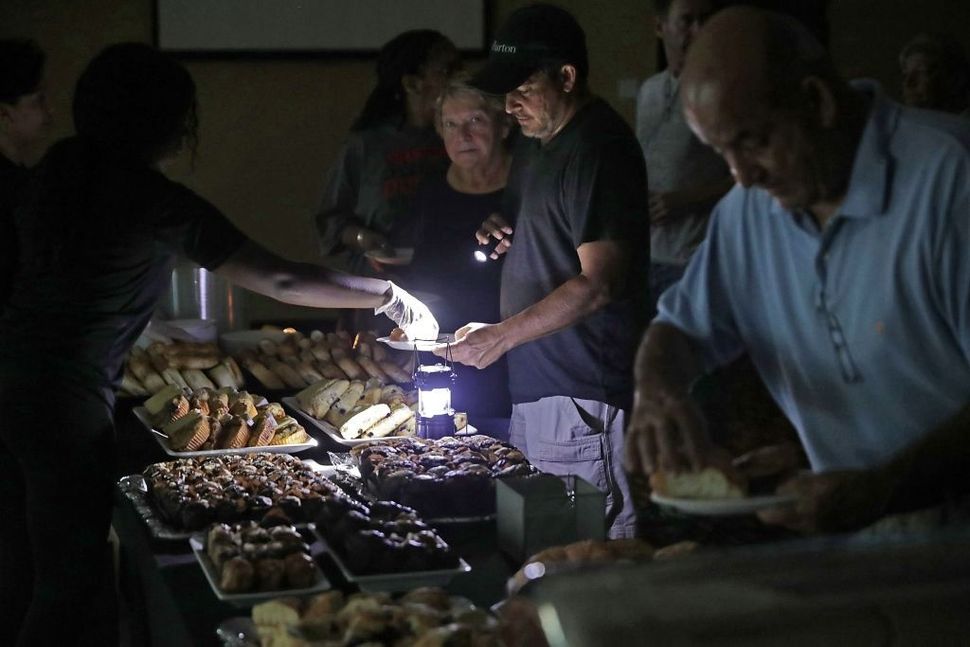 Thousands of Jewish seniors in parts of South Florida are still without power due to the after-effects of Hurricane Irma, an issue of growing concern after at least seven people died in a local nursing home.

“At the moment, we’re still working on getting people food and water, and we’re waiting on electrical in a number of these places,” the CEO of the Jewish Federation of Broward County, Michael Balaban, told the Forward. “The biggest crisis is the lack of air.”

He explained, “Some of our sites may have two legs of their power up, which puts on the lights, but they need a third leg to operate their air conditioning.”

One retirement facility, Century Village in Pembroke Pines, has 11,000 units, half of which have no power, he said. The area is on notice to boil its water before drinking it, but many don’t have the power to do so. Some residents can’t even plug in their oxygen machines, the Miami Herald reported.

The issue is even more acute at assisted-living homes or other facilities that care for elderly Jews with health problems.

Balaban expressed frustration with Florida Power & Light, the local power provider, for not prioritizing the elderly. “The only thing the power company can tell us is that they hope to have everything restored by the end of the weekend,” he said. “Unfortunately, there is a lack of clarity.”

That exasperation was shared by Broward County commissioner Nan Rich, a former president of the National Council of Jewish Women.

She said that the power company is “saying that they have emergency repairs to manage, and I understand that, but there are those of us who believe that since we have a huge senior population in Broward County with large numbers of nursing homes and rehabilitation centers, they should be next on the list of priorities, because they are the most vulnerable in our community.”

The Florida Health Care Association, which represents 81% of Florida’s nursing centers, told CNN in a statement on Wednesday that “approximately 150 facilities out of the nearly 700 facilities in the state do not currently have full power services restored.”

Most experts advocate keeping elderly facility residents in place during storms rather than evacuating them beforehand, due to a facility’s logistical advantages over a private home that may also suffer power outages or structural damage. “We believe in ‘evacuating in place,’” the vice president of Miami Jewish Health Systems, Chure Gladwell, told the Forward. “That does make it safer. And so far, that strategy has proven to be true.”

In Broward County, the local federation was organizing relief efforts and volunteers to deliver food (especially kosher food), clean water and ice to affected residents, in conjunction with local Jewish organizations as well as local partner groups like the United Way. Balaban said that he had just approved the purchase of 2,000 units of three meals each to be delivered by Meals on Wheels.

Other parts of Florida have mostly recovered from the disaster. Michael Hoffman, CEO of the Jewish Federation of Palm Beach County, 50 miles north, told the Forward that in their main independent- and assisted-living facility, the power did not go out, and they had a backup generator just in case.

“Our community and our federation system was well organized, well mobilized, and there was great communication and coordination,” he said. He added that there “is a need for volunteers to deliver meals to homebound seniors… [but] fortunately, that’s the extent of our needs right now.”

Meanwhile, Gladwell said that Miami Jewish Health Systems, the largest long-term care facility in the Southeast, had almost completely uninterrupted service and activities during the storm because of its functioning backup generator (one building still does not have air conditioning, but residents there have been moved elsewhere on the campus), as well as the fact that essential personnel stayed and slept in the facilities during the storm and its aftermath. Seventy-five percent of the facility is now back on the main electrical grid.

Gladwell told the Forward that FP&L had quickly restored their power. “Facilities such as ours are a high priority,” she said.

In fact, during the storm, residents at their independent living facilities held a “hurricane party,” complete with refreshments and a hired piano player.

The seven deaths in the city of Hollywood were likely due to health complications caused by heat exposure. As of publication of this article, it does not appear that any of the deceased are Jewish.