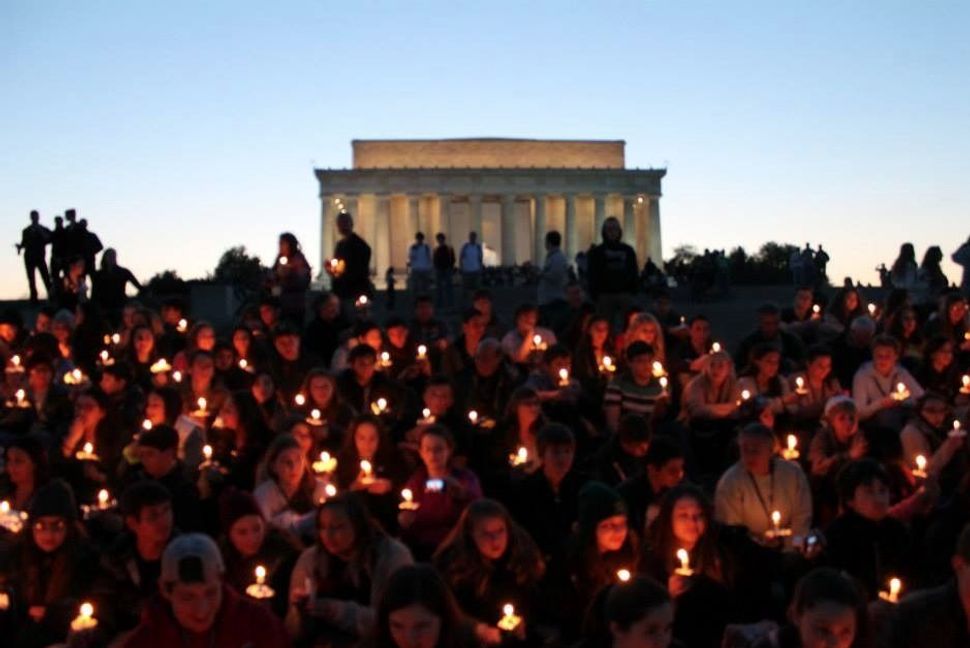 Each year of Barack Obama’s presidency, hundreds of rabbis from all denominations had an annual heart-to-heart with him during a High Holidays conference call.

Why is this year different?

A coalition representing thousands of rabbis from the Reform, Conservative and Reconstructionist movements opted out. They said they couldn’t countenance such a connection with Trump after he blamed “two sides” for the violence that occurred in Charlottesville, Virginia, during white supremacist rallies there in August. The move lost the liberal denominations a cherished moment with the country’s most powerful politician, but it gained them support among their own followers.

Trump’s election has energized liberal Jewish groups, in what some call a “tectonic shift” in activism.

“Our numbers are off the charts,” said Rabbi Jonah Dov Pesner, director of the Religious Action Center, the activist arm of the Union for Reform Judaism. “People are streaming through the doors.”

Across the country, religious leaders of all faiths whose politics are to the left are getting involved in the fight against Trump’s policies on health care, immigration, poverty and the environment. The New York Times recently dubbed it a “religious resistance” — and Jews are increasingly active in it.

This trend is perhaps most dramatic in the Reform movement, which accounts for 35% of the country’s 6 million Jews, and is the community’s largest denomination. Reform leaders and activists are taking advantage of this moment of political and spiritual searching.

“The Reform movement needs to capitalize on opportunities that present themselves,” Dana Evan Kaplan, author of “American Reform Judaism: An Introduction,” wrote in an email to the Forward. “I think you’re going to see a dramatic rise in both membership numbers and especially the percentage that forms the core group of activists in the Reform movement.”

Even by March, the Religious Action Center’s public policy conference in Washington had attracted 800 Reform leaders, Pesner said, which was more than double from the year before and the largest since the conference was started in the 1970s. The conference is held every two years and presents political briefings on current issues and legislation.

Social justice has long been a rallying cry for liberal Jews among whom political causes have taken on deep spiritual importance. Indeed, more than a third of American Jews cite “working for social justice and equality” as an essential part of “being Jewish,” according to Pew Research Center polling, while only 19% say ritual observance is essential.

But as the Jewish community heads into its holiest season, marked by its new year harvest holiday and the Day of Atonement, congregational leaders are reporting an uptick in activism and synagogue attendance and a growing sense that political activism is itself a spiritual act.

“We’re in a moment when people have woken up,” said Elana Rosen-Brown, a cantor and rabbi at Rodef Sholom, a Reform congregation of 1,000 families in San Rafael, California. “I’ve been at a rally once or twice a week, and lots of our congregation is going, too.”

Rosen-Brown’s synagogue members declared themselves a sanctuary congregation and have rallied to support a local Latino man — a parent from a neighboring public school — who was detained and is facing deportation. 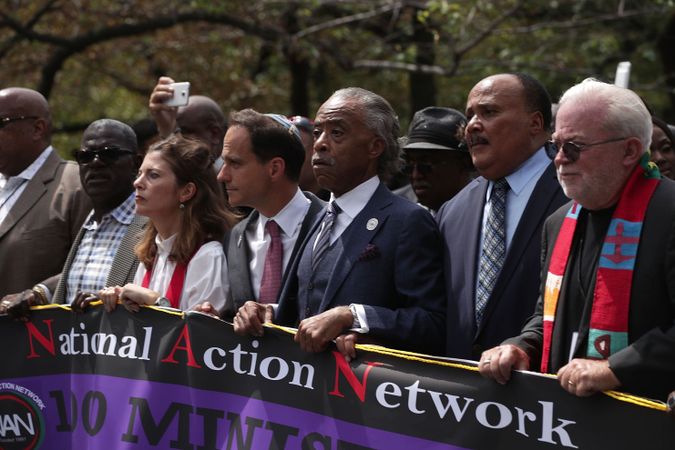 Rabbi Pesner, fourth from left, stands next to Al Sharpton at an August rally of religious leaders in Washington D.C. Image by Getty Images

Jessica Marker, a member of that congregation who works at the school, said that the man is a friend to the synagogue who had attended some events there. Congregants are helping to support the man’s family, petitioning on his behalf and visiting him at the center where he is detained.

“More congregants want our congregation to take a stand,” Marker said. “There is an extra cohesion under Trump. And for me, the activism comes from a Jewish place.”

Rabbi Michael Adam Latz, who leads synagogue Shir Tikvah, also Reform, in Minnesota, said that his congregants want to be engaged in the political issues that move them, especially after Charlottesville. Congregants who work as lawyers, for example, have volunteered to get involved in immigration issues on behalf of the synagogue.

“There were challenges with other administrations — Obama had issues, too — but there is a tectonic shift with this administration,” Rabbi Jonathan Roos of Temple Sinai said in Washington. “Under Obama, the Jewish community did not feel that there was a values-driven threat to American democracy.”

Roos said he’s seen a sustained bump in activism organized by his Reform synagogue. His large synagogue of 1,200 families is home to a committee that organizes actions and protests about gun violence. Before Trump’s election, Roos said only two or three people would show up for meetings. “Today, we get 20 or 30,” he added.

It’s not that gun violence is new under Trump, Roos said. But Trump’s move to roll back gun control — coupled with images of armed militias marching in support of Trump — haa made congregants see Trump as part of a troubling trend.

The rabbis and congregants interviewed all evoked the Jewish principle of tikkun olam, literally “repair of the world,” as a spiritual inspiration for their work. A religious concept with messianic significance about mankind’s role in the restoration of God’s Kingdom on Earth, the phrase has been interpreted differently by Jewish groups for centuries. Early Zionists saw their work in Palestine, for example, as part of this heavenly work.

Tikkun olam as a catchall for “social justice” is only a century old, according to the Brandeis Univesity professor Jonathan Krasner. This meaning coalesced, Krasner wrote, “as American Jewry struggled to come to terms with the implications of the Holocaust and the mission of American Jewry in a post-Holocaust world.”

During the civil rights era and through the 1970s and 1980s the term gained popularity, Krasner wrote in a history of the phenomenon in the Jewish Political Studies Review. “By the 1990s, _ tikkun olam_ was everywhere,” Krasner wrote.

Michael Lerner, the editor of Tikkun Magazine — an outlet that helped popularize the concept as shorthand for liberal activism — said that during the Obama administration he saw many liberal Jews lulled into passivity. “Let’s be spiritual, let’s be inward, they would say,” Lerner said. Now, Lerner said he’s flooded with queries: “More and more people are writing and calling and saying, ‘How do we get to be a part of this?’

To be sure, this political malaise didn’t afflict right-wing Jews during the Obama years. During his administration, they were the ones who played the role of active opposition to the president’s Iran deal. And while 75% of Jews tend to vote Democrat, that means a significant minority vote Republican.

While some liberals were hesitant to criticize Obama, a leader who won enjoyed wide support in the Jewish community, Trump is seen as an enemy to their core progressive values. While they are working to repair the world, the thinking goes, it’s Trump who is actually breaking apart the world. Spirituality and politics are entwined.

Thank you Mary. Trump is the antithesis of Tikkun Olam.

For the leftist Jews who view Trump as an adversary, the weeks ahead mean more actions — fueled, they say, by a sense of opposition to the president and his agenda. These include some specifically High Holidays inspired events: Roos’s D.C. congregation will create on their lawn a display of T-shirts lettered with the names of victims of gun violence; Rosen-Brown’s synagogue will continue to rally around their detained neighbor, and Latz’s community is inviting a mosque to their Yom Kippur service in a gesture of Muslim-Jewish solidarity.

That convergence of the political and spiritual is clear to Latz.

Latz has attended a flurry of rallies in the past weeks and said he had a realization about the importance of activism for the Jews in his congregation. It’s not a strictly political act.