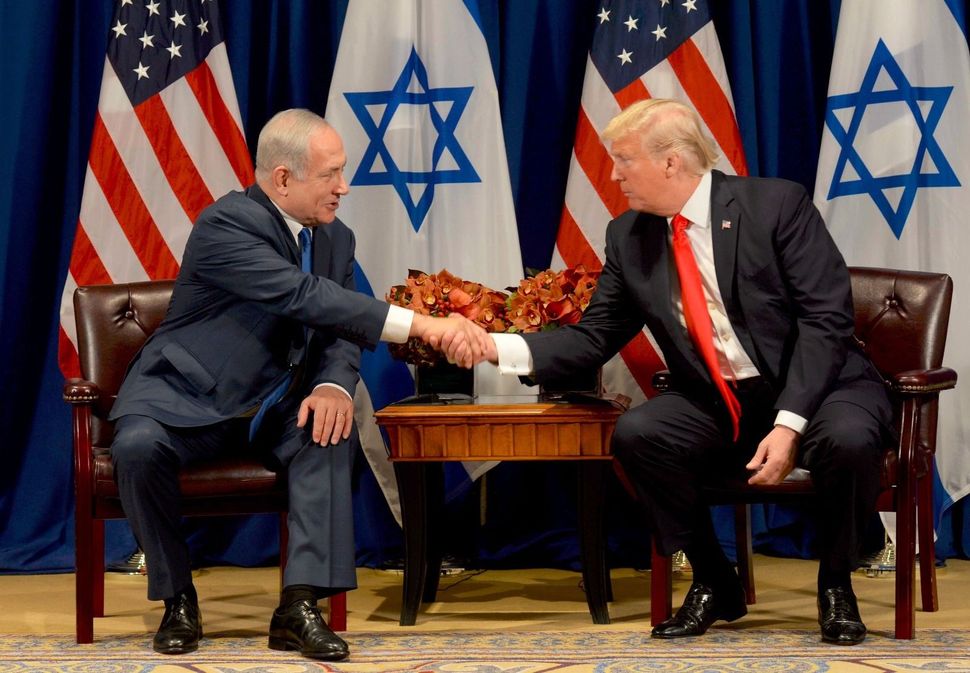 The two-state solution, once a cornerstone of American and Israeli policy and official communications, is now so explosive that it cannot be uttered even when the president of the United States and the prime minister of Israel meet to discuss the future of the Middle East.

But when asked whether “it” would entail a one-state or two-state plan, Trump only said, “we’re talking about it a lot.”

Netanyahu, briefing Israeli reporters after the meeting, went into greater pains to avoid speaking about the two-state framework.

“Peace and security, security in peace,” Netanyahu said when asked how he articulated his perception of a future peace agreement to Trump. When pressed by reporters to say if he still supports a two-state solution, Netanyahu avoided using the term, saying that “I haven’t changed my view” and later, after another round of prodding: “My view is clear and has been stated. I said it in the clearest of ways.”

At the conclusion of the exchange, Netanyahu told reporters: “What is important is the substance, not the words. The words don’t give you the substance.”

Palestinians and other watchers of the Israeli-Arab conflict could find many reasons for despair after the Trump-Netanyahu meeting. For just over an hour, the two leaders focused primarily on the Iranian nuclear deal and on Iran’s role in the Middle East. The Palestinian issue, until recently the centerpiece of any Israeli-American high-level interaction, was reduced to generalities (by Trump) or disregard (by Netanyahu). “He really hopes there will be progress,” Netanyahu said of Trump’s stance on the conflict. “There were attempts, but I can’t report on any progress.”

Trump is expected to meet with Palestinian Authority President Mahmoud Abbas in New York on Wednesday, and Trump’s diplomatic team, led by advisor/son-in-law Jared Kushner and international envoy Jason Greenblatt, already met with the Palestinian delegation. But the current focus of the U.S.’s effort is on economic improvement in the West Bank, not a comprehensive peace deal.

Netanyahu, according to his own statements and comments made by members of his delegation, believes he has found an ally in Trump on issues relating to the Iranian nuclear deal. This notion is based mainly on the two leaders’ shared dislike of the deal, which was reached by the Obama administration. But Trump left Netanyahu with very little in terms of tangible achievements.

The president did not promise to repeal or amend the nuclear agreement, as requested by Netanyahu, and apart from defining it as a “terrible deal,” did not indicate that the U.S. will take any measure beyond ensuring the international community enforces it diligently.

Netanyahu, however, believes that in his heart, Trump gets it. “We share the same opening position on the deal,” Netanyahu said after the meeting. “We both see it as a problem, unlike the previous administration.”

Sources close to the prime minister added that the fact that the president is willing to even entertain the idea of changing or withdrawing from the nuclear deal is a great achievement for Israel and for the prime minister’s dogged opposition to the agreement.