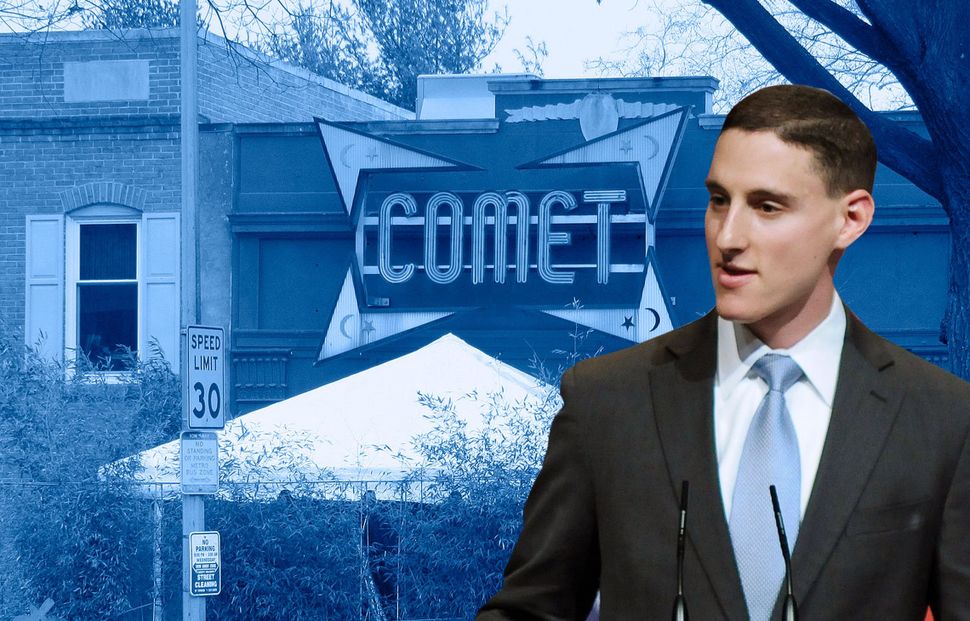 Josh Mandel, a U.S. Senate candidate from Ohio, has agreed to accept the first endorsement from a new political fundraising group put together by conspiracy theorists, a move that deepens an unlikely relationship between a Jewish politician and the “alt-right,” an amorphous political movement that has anti-Semitic elements.

On October 4, Mike Cernovich and Jack Posobiec launched the Super PAC #REV18 with the goal of advancing anti-establishment Republican candidates in the mold of President Donald Trump. Mandel, Ohio’s state treasurer and the putative Republican candidate against Senator Sherrod Brown in the 2018 elections, is the group’s first beneficiary.

Cernovich, who prefers to describes himself as “new right” rather than “alt-right,” is a leading social media voice of the movement who has used his platform to spread mostly-unsubstantiated rumors and claims against Democrats and to launch campaigns targeting feminists and establishment Republicans. Posobiec is an online provocateur who mixes journalism and pro-Trump activism while disseminating conspiracy theories involving Democrats and anti-Trump activists.

Mandel, 40, had publicly allied himself with them even before they created the PAC. Mandel defended them when the Anti-Defamation League had put Cernovich and Posobiec’s names on a list of provocateurs, dubbing them “alt-light,” a term referring to far right activists who “generally shun white supremacist thinking, but who are in step with the ‘alt-right’ in their hatred of feminists and immigrants, among others.” Mandel sided with the Cernovich and Posobiec and attacked a national Jewish organization:

By accepting #REV18’s endorsement, Mandel is sharpening his credentials in the emerging wing of the Republican party led by Steve Bannon, the financier-turned-publisher-turned-political kingmaker who made Breitbart into a “platform for the alt-right.” Bannon has already proven his ability to launch candidates by backing the successful dark-horse candidacy of Roy Moore in Alabama’s Republican Senate primary race.

“I would guess Mandel has said: ‘This is a train I want to get on. This is what wins Republican primaries in 2018,’” said Lawrence Rosenthal, chair of the Berkley Center for Right Wing Studies, who compared the rise of the Bannon-led wing in the Republican Party to that of the Tea Party eight years ago. Mandel was endorsed by the Tea Party in his first Senate run in 2012.

Affiliated under the “alt-right” umbrella are activists promoting outright anti-Semitic theories claiming Jewish control of finance, government and media; readers and writers of the neo-Nazi Daily Stormer website and white supremacists who preach against Jews trying to threaten their “European” values. And, of course, endorsements mean more cash in a race that’s bound to be very expensive, if the last time Mandel ran against Brown is any indication.

The #REV18 endorsement puts Mandel at an advantage only a few 2018 candidates yet enjoy. While none have taken official endorsements from “alt-right” activists, some, including Kelli Ward in Arizona and Danny Tarkanian in Nevada are running on an anti-establishment platform resembling that promoted by Bannon. Mandel’s close ties with two of the most vocal promoters of the Trump/Bannon ideological line will enable him to tap into the newest emerging force within the party.

The Mandel campaign did not respond to the Forward’s requests for comment.

Cernovich has carefully sought to distance himself from the “alt-right” in recent months, as the public perception of it became synonymous with racism and anti-Semitism. Following the Charlottesville violence, he posted a video disavowing the “alt-right” and its white supremacists and those he described as the “Nazi boys.” Cernovich also took issue with the ADL characterization of his views as “alt-light” and now describes himself as “new right.”

But his trail of tweets and blogposts is paved with controversy. Cernovich has been a vocal anti-feminist and has given credence to many conspiracy theories, including the claim that Jewish billionaire George Soros staged the chemical attack of Syrian president Bashar al-Assad against his people, and that Hillary Clinton and her top campaign advisers operated a child sex ring from the basement of a popular Washington DC pizza parlor.

This latest claim, known as “Pizzagate,” turned violent when in December a North Carolina armed man entered the packed restaurants and fired shots, saying he was on a mission to “investigate” the child sex trafficking taking place there.

Posobiec also promoted “Pizzagate” forcefully. He tried to livestream a visit to the place and asked his followers to enter the restaurant, Comet Ping Pong, with hidden cameras to document the alleged child sex ring operation. He also tried to advance conspiracy theories accusing Democrats of involvement in the murder of DNC staffer Seth Rich last July. In November 2016, weeks after the election, Posobiec went to an anti-Trump demonstration in Washington carrying a sign reading “Rape Melania.” The provocation was revealed only after the sign caused a stir on social media.

But associating with Cernovich and Posobiec is not expected to create any political liability for Mandel, said University of Alabama assistant professor George Hawley, author of the recently published “Making Sense of the Alt-Right.”

“The typical Republican voter doesn’t know who Mike Cernovich is,” he said, adding that he expects the brand of Republicanism Cernovich and Posobiec represent to gain “a few more buyers,” as the 2018 elections get closer.

On its websire, #REV18 calls to “take back the GOP” and laments the fact that “the same establishment forces that worked to prevent Trump from winning the presidency are now attempting to stop the successful implementation of the America First policy agenda that voters want and deserve.” The group states that its policy agenda “reflects an exclusive and unwavering commitment to the average American citizen who loves his country and wants to keep it.” Posobiec called Mandel a “perfect candidate for REV18,” explaining that Mandel “isn’t afraid to stand up to the institutional Left and establishment GOP like [Ohio governor John] Kasich. He will be a great Senator for Ohio.”

But while within his party Mandel, who still needs to win the Ohio primary, will face no backlash for joining forces with #REV18, his Democratic rival, incumbent Sherrod Brown, is seizing on the opportunity to paint Mandel as an extremist.

“It’s only a matter of time before this Super PAC and similar groups flood Ohio with spending for Mandel,” Brown’s campaign warned in an email to donors, soliciting contributions to counter Mandel’s financial boost from the far right.

The new Super PAC, according to its founders, is currently made up of a $50,000 donation put up by Jeff Giesea, the third co-founder who had worked in the past with the Koch brothers and with Peter Thiel. “We expect major donors come in soon but we want to prove the model and get the grassroots involved first,” he told the Atlantic. “It’s safe to say we are broadly aligned with Team Bannon.”

Correction, October 16, 2017 5:38 p.m.: An earlier version of this story suggested Mandel could accept funding from #REV18. In fact, as a Super PAC, #REV18 cannot provide funding directly to a candidate