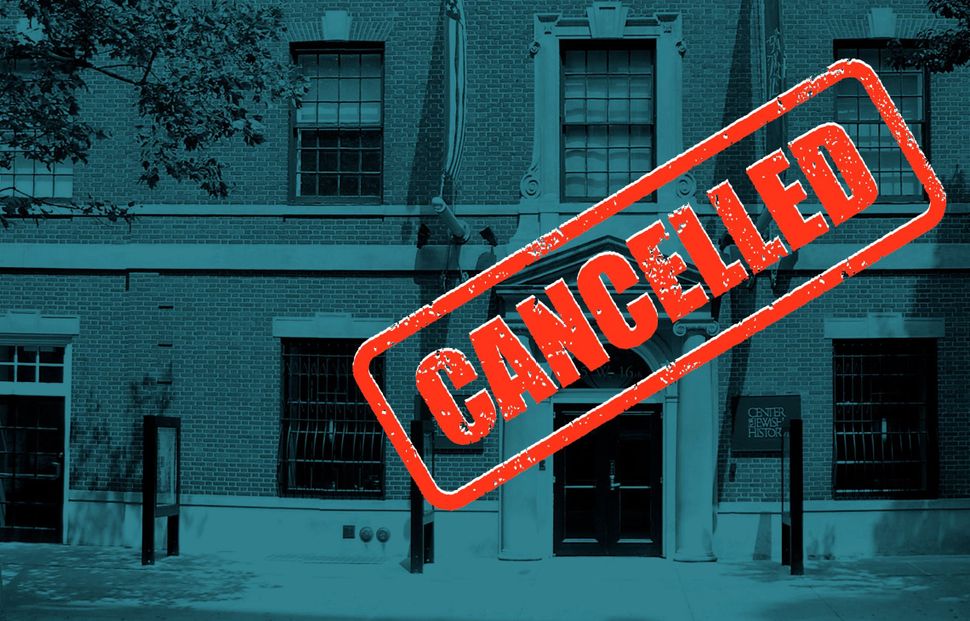 The American Jewish Historical Society has cancelled a play reading and a historical panel sponsored by left-wing critics of Israel amid a campaign against the new executive director of the Center for Jewish History.

The AJHS, which is housed in the CJH’s building in Manhattan, told co-sponsors on Monday that it was cancelling an upcoming reading of a play by Jewish playwright Dan Fishback, and a panel on the history of the Balfour Declaration co-sponsored by the New York City chapter of Jewish Voice for Peace.

“I was at the American Jewish Historical Society yesterday afternoon having the production meeting and planning the event,” Fishback told the Forward shortly after being informed of the cancellation. “The staff was all saying how excited they were.”

Fishback said AJHS staff told him that AJHS’s board of directors decided Monday night to cancel the performance.

Jewish Voice for Peace also learned of the cancellation of their event on Tuesday. The group, which supports the boycott, divestment and sanctions movement, had been planning the panel with AJHS, its co-sponsor, since July.

A loose network of right-wing Jewish groups and activists, including a former chief of staff to Israeli prime minister Benjamin Netanyahu, have mounted a campaign against the CJH over the past month, calling for the firing of its new executive director, David Myers, over his ties to dovish groups like the New Israel Fund and J Street.

CJH’s board has stood by Myers, a prominent academic. But now its partner organization, the AJHS, appears to have buckled under pressure, canceling two long-planned events.

In a statement on its Facebook page, AJHS said that it cancelled the two events because they “do not align with the mission of the AJHS.” The group’s executive director, Rachel Lithgow, declined a request for further comment.

Ronn Torossian, the public relations executive who launched the campaign against Myers, praised the cancellations, but said he was not satisfied and reiterated his call for Myers’ firing. “The AJHS and CJH are right to cancel Anti-Zionist JVP programs, yet this fish remains rotten from its head,” Torossian wrote in an email to the Forward. “One wonders why it was necessary for us to mount protests demanding no JVP events at the Center for Jewish History, and why we received such initial pushback.”

Fishback’s play, “Rubble Rubble,” was scheduled for a reading on December 14 at CJH, sponsored by AJHS. The play deals with a Jewish family split over Israel and Zionism. “It’s not a didactic play at all,” Fishback said. “It’s a complicated portrait of a family that’s trying to make sense of its legacy.”

On Monday, the day before the cancellation, a handful of right-wing Jewish outlets published a column by Torossian that cited Fishback’s membership in JVP and his support for the BDS movement.

Fishback told the Forward that he believed the decision to cancel the reading was related to his personal politics, not his work. “This is not about the content of the play,” he said. “This is about the statements I’ve made and the fact that I’m involved in JVP.”

In a post on Facebook, Fishback wrote that he had been working towards the reading all year. “I’ve built my whole life around this performance,” he wrote. “We were so overjoyed to have AJHS’ support for this work. Without it, we have no idea what comes next. I feel in my gut that ‘the show must go on,’ but in this moment, in this climate, I don’t know how.”

AJHS officials did not tell Fishback why they were cancelling the reading. “I’ve had the full support of their staff from the very beginning,” he said. “I was told this was a decision by the board.”

The second canceled event, a JVP-sponsored panel, which was scheduled for late October at CJH. The historical panel have discussed the Balfour Declaration, Great Britain’s 1917 assertion that its government favored the creation of a Jewish state in historic Palestine. Panelists included Robert Herbst and Jonathan Kuttab, both attorneys. AJHS was listed as a co-sponsor of the event.

“Pressure from right-wing donors and columnists can still force an institution to close its doors to a complex and nuanced conversation,” said Naomi Dann, JVP’s media program manager. “There’s a long history of Jewish Voice for Peace and other organizations that challenge the political lines about Israel and offer more criticism than institutions are willing to tolerate being shut out and silenced.”