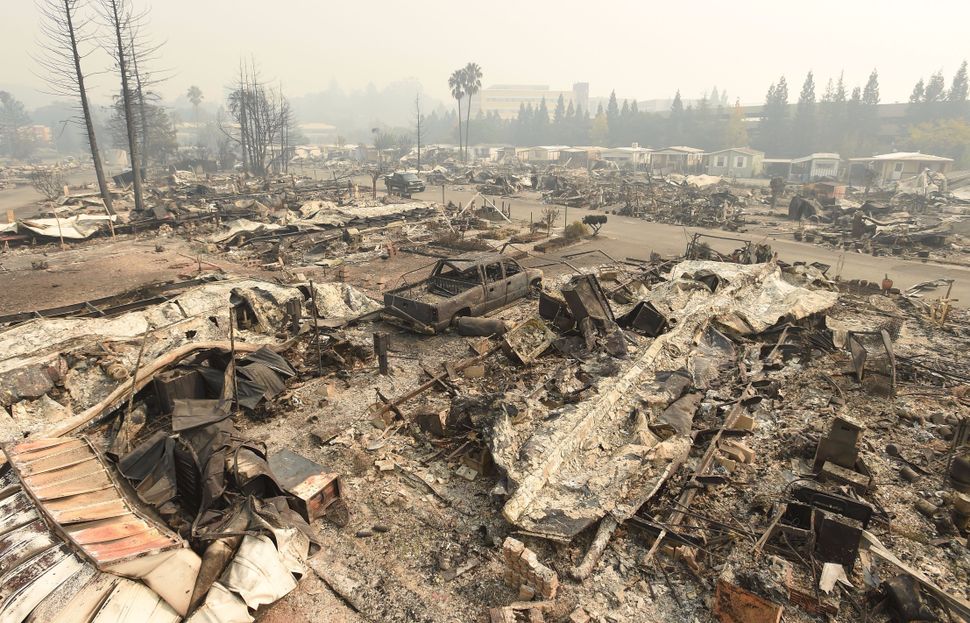 Arielle Morrison was just a few hours away from her wedding ceremony on Sunday afternoon when she started seeing the Facebook posts about Camp Newman: There was a wildfire menacing Sonoma County, California, encroaching on the grounds of her beloved summer camp.

The wildfire was part of the current Northern California firestorm, which has so far burned more than 160,000 acres and killed 21 people.

Upon seeing the news, Morrison and three of her bridesmaids — friends since they met at Camp Newman over 15 years ago — began sending messages to other camp friends, trying to figure out if the site was in danger. It was.

Morrison’s wedding went on, though the wildfire was in the back of her mind throughout the evening. It wasn’t until she got home from her wedding weekend on Monday afternoon that she began to understand the extent of the damage. The camp had already posted that “the majority of the buildings at our beloved Camp Newman home have been destroyed.” But for Morrison, that wasn’t what made it real.

On Monday evening, the camp posted a video of staff leaders and their children linking arms in a circle and singing, traditionally the last activity of the day at camp. Morrison said that in the siyum, as they call it, “you celebrate the day that you had, prepare for sleep and get ready for a wonderful day the next day.”

“That’s when it really hit me what was happening at camp,” Morrison said.

“Everyone was very somber, but it was also a touching moment, because you could see thousands of people liking and commenting within this five minute time span,” she added. “It showed you that the community will always come together.”

In the wake of the wildfire that has consumed much of Camp Newman, its current campers, alumni, staff members and directors have been reaching out to one another to offer words of support and offers of help. While the community is sharing its grief and despair, it is also showing its resolve to rebuild the camp and recreate the Jewish space that thousands of campers have called their home away from home.

The camp’s director, Rabbi Erin Mason, said that creating a strong Jewish community has always been the camp’s goal.

“The camp site facilitated that,” Mason said. “But what we’ve seen this week has been the love and community that transcends that. That was built at camp, but exists beyond camp.”

Camp Newman has been a summer getaway for thousands of children since its creation in 1997. Some of its iconic features, including a steep hill with a large Star of David sculpture on top, a farewell sign over the camp’s entrance, and an amphitheater used for camp-wide prayer services often show up in pictures taken by campers and visitors. 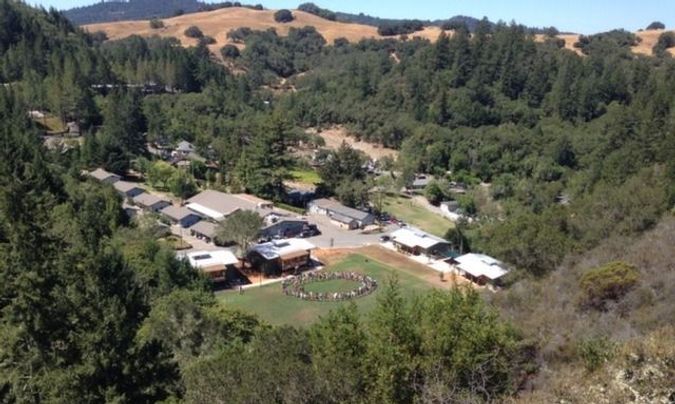 Though firefighters have stopped Mason and the Newman staff from visiting the site, she saw preliminary pictures of the grounds from an administrator who was able to briefly walk the grounds Monday evening.

“All day Monday I went on the assumption that we would lose a couple buildings,” Mason said. “None of us were really prepared for the total loss that we’re experiencing.”

When Mason and other staff members attempted to visit the site Tuesday morning, they were blocked by firefighters from coming within five miles of the camp. Forecasts of heavy winds Tuesday night stoked fears that embers could start more fires in the area, and more evacuations were ordered. The fire, which has burned nearly 30,000 acres, is currently at 0% containment.

Despite the damage—and the prospect of more to come—Mason says her spirits have been buoyed by all the people connected to the camp who have reached out to her and other staff members.

“They want to send their love, and they tell stories about how camp has affected them,” she said. “And then they ask what they can do.”

As news of the camp’s devastation spread, families began organizing ways to raise money for the rebuilding effort. Multiple GoFundMe campaigns have been set up, including one fund started by a 12-year-old Newman camper and a few others by children from Jewish summer camps across the U.S. The camp’s own fund, #NewmanStrong, has been shared widely on Facebook.

“There are many people ready to see that place rebuilt,” said Randi Applebaum Goldman, whose three children have attended programs at Camp Newman.

Goldman recalled attending weekend retreats for families with children with special needs for ten years, and watching her daughter go from camper to staff member. Her family lives in a city with a small Jewish population, and she says her children did not have many opportunities growing up to be active in a local Jewish community. Camp Newman, she says, gave her kids the opportunity to express their Jewish identity.

“My daughter always likes to say when she’s at camp, she’s with the tribe,” Goldman said.

Goldman said that she has befriended parents of her children’s friends, especially the parents of other children with special needs.

“I can’t stress the word connected enough,” she said. “It’s almost like a family.”

“Mishpocha” means family, & Jewish summer camp IS family. Today, @urjcampnewman established a fund to help with its rebuilding efforts after the California wildfires wiped out much of the camp’s physical location. You can donate at www.campnewman.org/newmanstrong. Together, we are #NewmanStrong… . . ?: Simon Rosenblatt

Campers come from all over the world, and the camp brings a sizable number of Israeli staff members each year.

One Israeli, Kfir Kachlon, said that he felt welcomed by every person at the camp when he first went in 2009 — even though he says he was patient zero for the camp’s outbreak of swine flu. He bonded with other staff members while they were in quarantine together, saying, “we all became one big family.”

“For me, camp was a home, I met amazing new friends, was inspired by the kids I worked with, fell in love with NorCal,” Kachlon wrote in a Facebook message from Israel.

The camp’s executive director, Ruben Arquilevich, said that he has received thousands of messages from people connected to Newman since news of the fire was posted on Facebook. He says he can barely sleep at night for all the texts and calls from people hoping to find out what they can do to help rebuild the camp — and recreate the community. 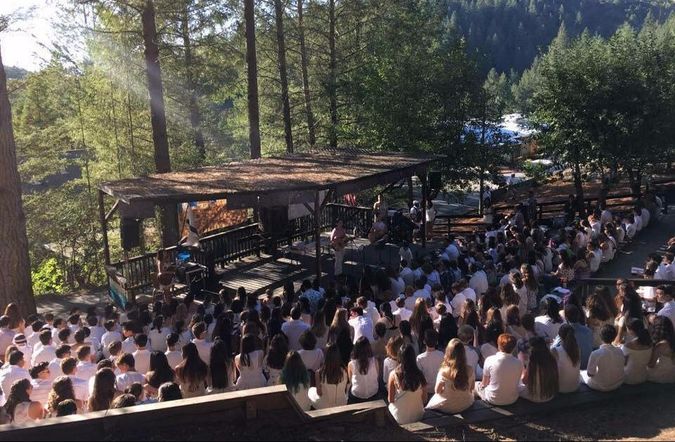 Arquilevich has also been contacted by dozens of leaders of other summer camps across the country, as well as synagogues from several denominations, asking how they can lend support.

“I’m relying on Judaism and our Jewish wisdom to understand loss and grief and moving forward,” he added.

Within the Bay Area, several synagogues and community organizations are holding “pop-up” Shabbat services in honor of Camp Newman. Temple Emanu-El, one of the oldest synagogues in California, is dedicating a planned Saturday night concert to the camp and making admission free.

Newman is a beloved campground for many in the Bay Area Jewish community because it is often the site of retreats for many Reform temples and other local Jewish organizations.

Newman is the latest in a series of camps run by the Union for Reform Judaism in Northern California. After the URJ sold Camp Swig, one of the first Reform summer camps on the West Coast, in the 1990s, much of Swig’s artwork, including a Holocaust memorial sculpture, was taken to the new Camp Newman.

This past summer, Camp Newman celebrated 70 years of URJ camping in Northern California, inviting alumni from Swig and its predecessor, Camp Saratoga, to visit Newman and look through old archives and pictures.

For Rabbi Mason, the director, the connection the URJ created across the three camps has been bittersweet this week.

“People have been asking, ‘has this been saved, has that been saved?’” she said.

Morrison, who found out about the fire at her wedding, said that even amidst the destruction of the camp, she is heartened by the strong response of the camp’s community.

“Even though the physical structures are gone, the community’s resilience is still the same,” she said.

Morrison is also thankful for having married someone who also attended Jewish summer camps as a kid. She reflected on the dissonance of having her wedding occur at the same time a wildfire burned her beloved camp down.

“It makes me realize that this is what life is, and on any journey, especially a Jewish journey, you need a community and a partner to walk with,” she said. “It shows you that you can celebrate and grieve at the same time.”