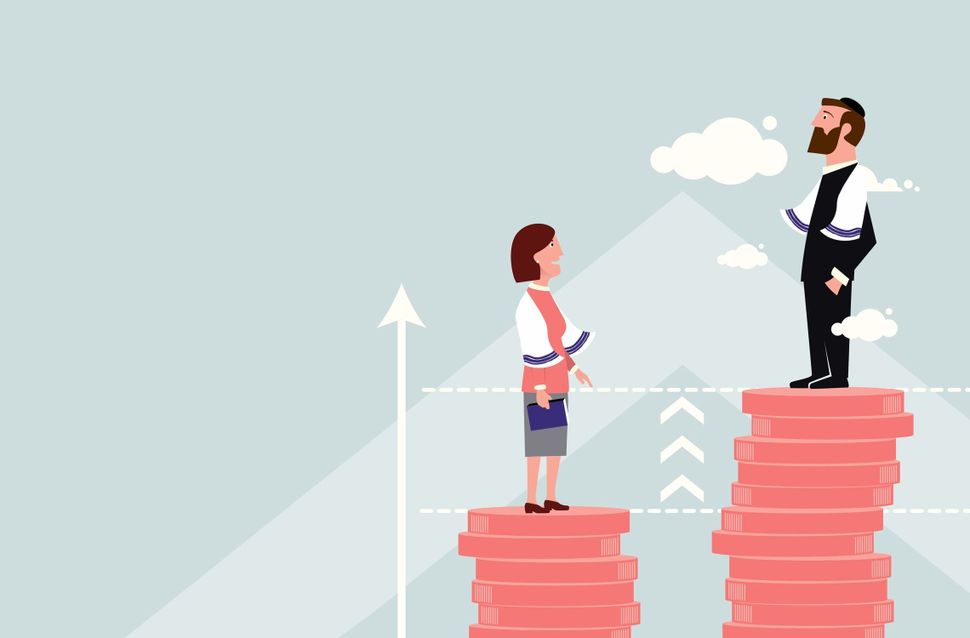 Reform synagogues are chronically underpaying female rabbis, according to a previously unreported study issued this past summer by the Reform movement.

Women in senior or solo rabbi positions at larger Reform congregations are paid 85% of what men make in the same jobs, the survey found.

And while men outnumber women 4-to-1 among senior or solo Reform rabbis, more than half the rabbis in associate roles are women.

“The first step is saying yes, we have a problem, and we have to own it,” said Mary Zamore, who leads the Women’s Rabbinic Network, a group for female Reform rabbis. “We take justice issues extremely seriously. We take egalitarianism extremely seriously.”

The findings, which are based on salaries that congregations report to the Reform movement’s rabbinical pension fund, suggest that despite the movement’s theological emphasis on egalitarianism and social justice, synagogue boards continue to underpay female rabbis drastically, 40 years after women first joined the Reform rabbinate.

Now, the Reform movement is working to take on the imbalance, led by Zamore’s group and the Women of Reform Judaism, an umbrella for congregational sisterhood organizations. Their effort, called the Reform Pay Equity Initiative, will seek to educate lay leaders and others on employment ethics.

“This is a social justice issue for all of us,” said Rabbi Steve Fox, head of the Reform rabbinical group the Central Conference of American Rabbis, which commissioned the study. “This is not acceptable to us.”

The findings mirror the persistent pay gap in the broader U.S. workforce, which some recent estimates place at 20%. Comparisons with female rabbis in the Conservative movement are difficult, as the movement has not published a study of female rabbis’ compensation since 2004. And while Conservative seminaries have ordained women since the 1980s, female rabbis run only three large Conservative congregations.

The new Reform movement study comes five years after a similar study from the CCAR that also examined the gender gap. The most recent study shows little change, with the gap narrowing in some categories and widening in others.

Zamore said that the problem in the Reform movement isn’t restricted to rabbis. Similar studies by the professional organizations for Reform cantors and educators, which have not been made public, have found similar gaps.

Reform seminaries began ordaining women in 1972, the first American Jewish denomination to do so. Today, of the just slightly more than 600 Reform rabbis employed full time at Reform synagogues, roughly a third are women. The compensation study, which examined salaries paid during the 2016-2017 salary year, found that aside from the handful of women at the top of the profession who lead the nation’s largest Reform congregations, there is a yawning gender gap in compensation.

“Clearly, everyone has known for a long time that there is a wage gap,” said Rabbi Laura Geller, ordained in 1976 as the third female rabbi in the Reform movement. Geller went on to lead Temple Emanuel of Beverly Hills, and was the first female rabbi of a major metropolitan congregation. She is now the synagogue’s rabbi emeritus.

“I didn’t have anyone to turn to to help me to think about things like negotiations,” Geller said. “It’s complicated when you’re a rabbi of a congregation, because you know the budget of the congregation and you know what the financial challenges are and you love the people and they love you, and you want everything to work out well.”

According to the Reform movement study, male senior or solo rabbis at congregations with anywhere from 600 to 1,000 families average a base compensation of $226,979. Female rabbis in comparable jobs averaged just 85% of that, taking home $193,762.

Zamore attributed the relative equity among top female rabbis at the biggest congregations to their being able to afford to hire lawyers to assist in their negotiations.

“If you’re making more, it’s easier to get a lawyer to help,” she said.

The survey data also shows that female rabbis are not being promoted to the tops ranks of their profession. Women are overrepresented among associate rabbis and underrepresented among senior and solo rabbis. Of the 459 senior and solo rabbis leading Reform congregations, only 116 are women. Just 24 women lead congregations with over 600 member families, compared with 101 men.

At the same time, 53 of 95 of the lower-ranked associate rabbis are women.

“It’s part of a bigger problem,” said Rabbi Susan Talve, a prominent activist who leads Central Reform Congregation, in St. Louis. “I guess we always hoped we would be a bridge generation, where we understood that we carried a lot of baggage from the ’50s…. As we’ve seen, we still have a lot of work to do.”

Zamore’s initiative to address the issue has hired an economist to examine the data and help shape future studies. Her group is also creating materials for congregations and synagogue staff to educate people about Jewish ethical employment practices.

“Because we’re such a grassroots movement, really we’re talking about doing some really systemic education work,” Zamore said. “Our problem is exactly the same problem that every woman in North America faces. Really every woman throughout the world.”

The CCAR has launched its own initiative in response to the study, a new task force to focus on women’s experiences in the rabbinate.