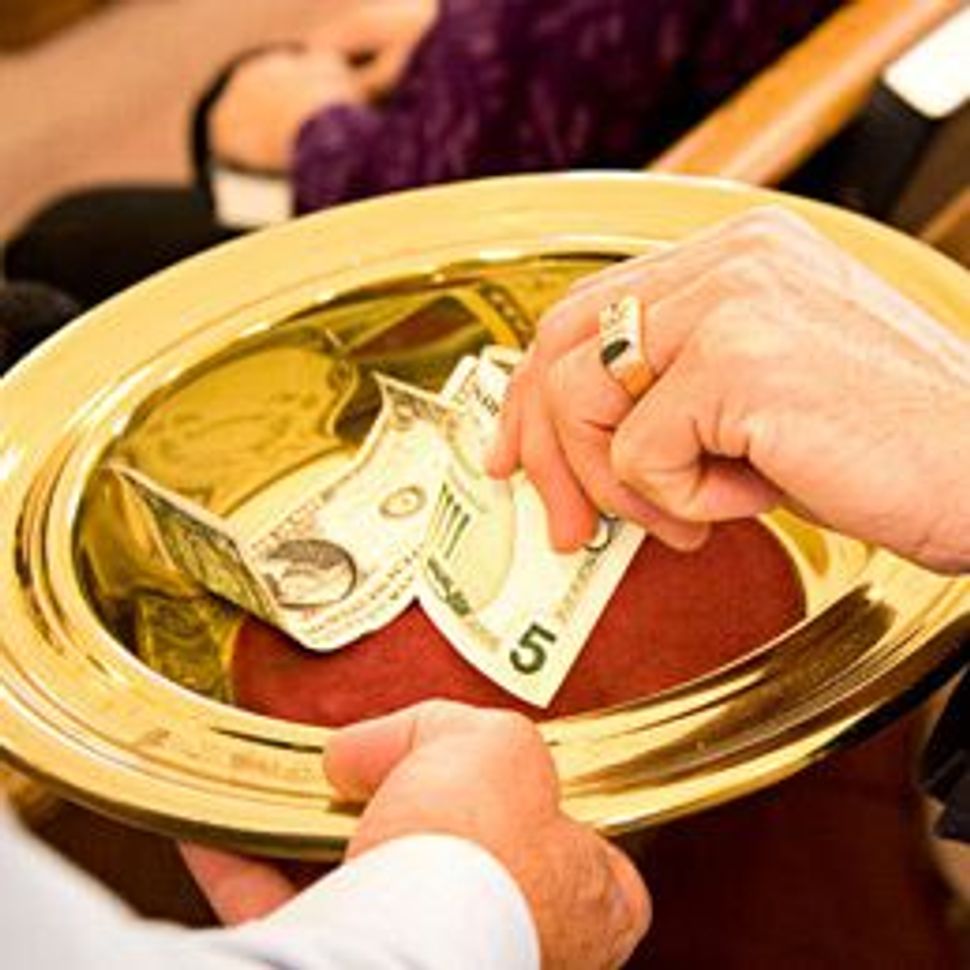 A survey conducted by the Forward has found that Jewish and Christian religious institutions appear to raise about the same amount per member, despite the fact that church giving is voluntary and synagogues charge membership dues.

The more than 20 churches and synagogues surveyed by the Forward represent a sampling from a variety of denominations in six cities across America. While there are significant regional and denominational differences, an examination of the aggregate data indicates that the amount raised per individual member is very similar between synagogues and churches. But the level of participation is quite different: While synagogues require roughly the same amount of dues from each of their members, church giving does not appear to be so evenly distributed.

Take Ahavath Achim, a Conservative Jewish synagogue in Atlanta, and Church of the Heavenly Rest, an Episcopal church in Manhattan. The two congregations are broadly comparable: Both serve slightly more than 1,000 middle- and upper-middle class households, have a multimillion-dollar endowment, employ about a dozen people and operate on an annual budget of $2.7 million.

Both draw around half their income from regular fees paid by members. But, like virtually all American churches, Heavenly Rest does not charge dues. Like most synagogues, Ahavath Achim does.

At Ahavath Achim, those fees are assigned by the synagogue, with each family paying up to $2,100 per year. Annual pledges at Heavenly Rest? As much, or as little, as you can give. While only one-third of member families participate in the church’s annual pledge drive, those that do give an average of $2,700 — far more than the cost of dues at Ahavath Achim.

The Forward also found great disparity in the way that churches and synagogues spend the money they raise. Those patterns — indicating, for instance, that rabbis are often paid far more than Christian spiritual leaders, and that churches send much larger portions of their budgets upstream to denominational organizations — will be described in the second installment in this series, which will appear next week. 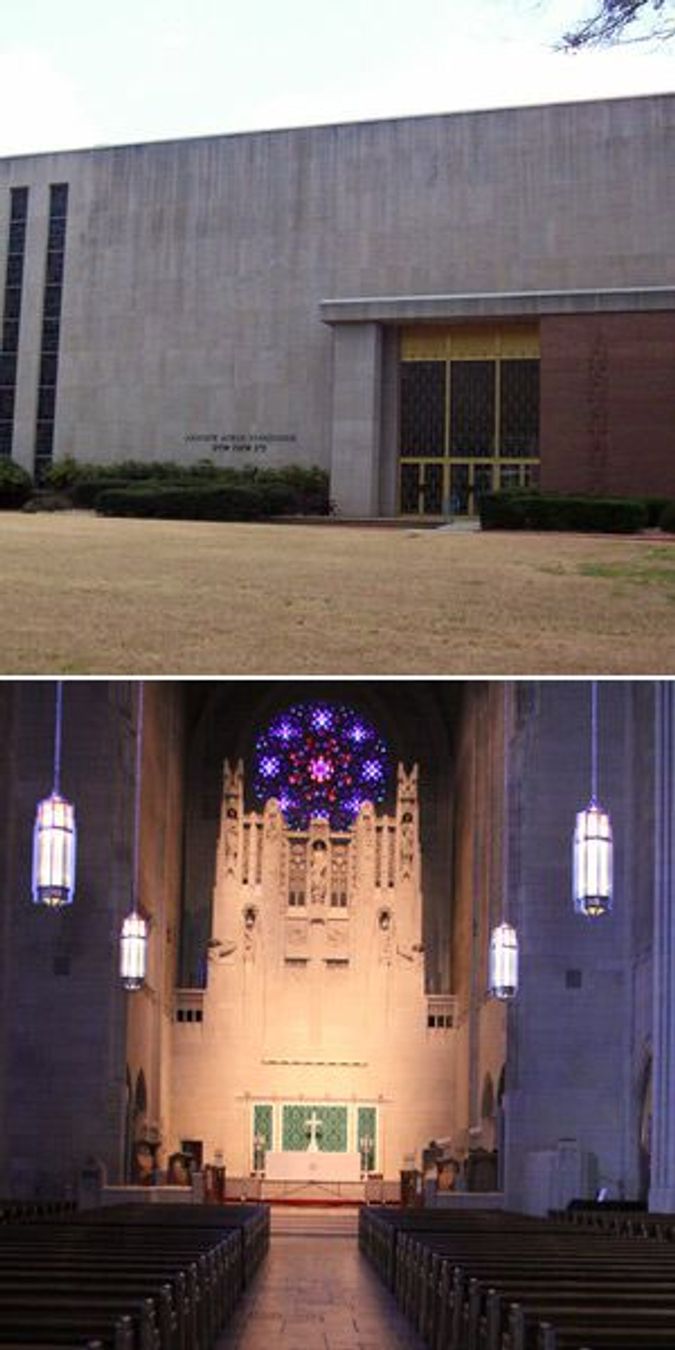 Twins?: Left, the Church of the Heavenly Rest, an Episcopal church in Manhattan, and, right, Ahavath Achim, a Conservative syn- agogue in Atlanta, are similar in size and budget. But while Ahavath Achim charges dues, all giving to Heavenly Rest is voluntary. Image by Top: SHULAMIT SEIDLER-FELLER; Bottom: COURTESY AHAVATH ACHIM SYNAGOGUE

Of all the differences between how synagogues and churches do business, however, none is as confounding to members of the other group as the matter of membership dues. “I don’t think many [churches] ever considered a dues model, and they’re sort of incredulous that Jewish congregations do it like that,” said C. Kirk Hadaway, a researcher at the Episcopal Church.

Synagogues’ base dues vary widely, from $1,000 per family per year to $3,000, according to officials within the Reform and Conservative movements. Although synagogues generally don’t bar noncontributors from regular services, some do limit High Holy Day services to paid-up members.

Churches, on the other hand, rely on voluntary gifts. Many run annual pledge drives; most pass baskets each Sunday. Among some conservative denominations, congregants are expected to tithe, or donate 10% of their income to the church. But among the balance of denominations, the amount donated is up to the conscience of the member.

The Forward’s poll examined churches and synagogues in each of six metropolitan areas: Atlanta; Boston; Los Angeles; Minneapolis/St. Paul; New York, and Tulsa, Okla. Unlike other tax-exempt organizations, religious institutions are not required to make public any information about their finances. So, all data was gathered in interviews with church and synagogue employees, who often provided approximations and estimates rather than exact numbers.

The churches that claimed the highest rates of member giving were in Tulsa and Atlanta. In Tulsa, Arrow Heights Baptist Church, a Southern Baptist church in the suburb of Broken Arrow, claimed that the average family gives $7,800 per year and that 73% of members give some amount. In Atlanta, St. Mark A.M.E. Church, a member of the historically black American Methodist Episcopal denomination, three-quarters of members give 10% of their income to the church, according to the Rev. Larry Hudson, the church’s spiritual leader.

Catholic churches polled reported raising the least. St. Mary of the Assumption, a parish in Boston, claimed 7,500 members and a budget of only $750,000.

Churches vary in how much guidance they give their members as to how much to pledge. At Our Lady of Guadalupe, a Catholic church in Los Angeles, gift amounts are hardly ever suggested, according to bookkeeper John Fleming. “It’s left totally to the conscience and the means of the giver,” he said. During the church’s recent capital campaign, Fleming said that the priest would take up a secondary collection each month, prefacing it with a statement of how much money was still needed.

Meanwhile, Heavenly Rest provides a card suggesting a range of donations based on household income during its annual pledge drive.

As foreign as a purely voluntary system may seem from a contemporary Jewish concept of fixed dues, the reality of synagogue fundraising appears to be not so different from the system used in some churches. Dues certainly play an important part in a synagogue’s finances, with many synagogues saying that income from dues makes up half their budgets. But taking into account discounts for members who cannot afford the full fee and additional gifts given by other members, the dues-based model can look very much like a system of voluntary giving.

At Young Israel of Brookline, an Orthodox congregation in the heavily Jewish Boston suburb, only 70% of members pay their full share of the dues, which amount to $1,100 per family. Meanwhile, half the congregation donates more than it owes, either at the synagogue’s annual dinner or through general appeals. At Congregation Kehillath Israel, a Conservative synagogue in Brookline, about 90% of members pay the entirety of their dues, which are set at $2,510 per family. But the synagogue’s executive director, Scott Allen, estimates that 95% give above and beyond the required amount, with these extra gifts covering 45% of the synagogue’s budget.

Historically, American Protestant churches and synagogues shared a fundraising model. Both charged “pew rents,” or fees for seats, with rates often based on the particular seat’s desirability. The practice declined in Protestant churches in the late 19th century and had essentially disappeared by the 1940s. According to James Hudnut-Beumler, dean of Vanderbilt University’s divinity school, the shift represented a theological movement away from the notion that one could buy God’s favor by spending more money on the best seats. It was, Hudnut-Beumler said, “a radical extension of Protestant ideas to the financing of the church. And that caught on.”

Most synagogues swapped pew rents for dues in the 19th century as well, although some — notably, Temple Emanu-El on Manhattan’s Upper East Side — retain a form of the practice in the pricing of their High Holy Day seats. “You had a situation where people would pay more for certain seats, and in an age of discomfort with money or caste determining proximity to the worship, there was a move to democratize the funding structure,” said Rabbi Daniel Judson, a doctoral student at Brandeis University.

The comparison of per-capita fundraising undertaken by the Forward was complicated by differences in the ways synagogues and churches count members. While churches provided numbers of individuals affiliated with the congregation, synagogues provided numbers of dues-paying households. The Forward converted Jewish households into individuals by using figures gleaned from an analysis of the 2001 National Jewish Population Study undertaken for the Forward by Steven M. Cohen, a professor at Hebrew Union College-Jewish Institute of Religion.

The fundraising per-capita number was determined by dividing the percentage of the institution’s budgets raised through giving by the number of individual members.

Using this calculation, the median amount of funds raised per-capita by synagogues was found to be $660, only slightly higher than the church’s $640.

These numbers are approximate, as many of the figures on which they rely were estimated by church and synagogue officials. Further, definitions of “members” vary between synagogues and churches, and between Christian denominations. The Forward figures seem to imply, however, that churches don’t need to assign dues in order to raise the same amount of money per person as synagogues.

What the figures don’t say is how this giving is distributed among the members of the churches. “Giving is very skewed among Protestants,” said Mark A. Chaves, a professor of sociology and religion and Duke University, when told about the Forward’s figures, which he said surprised him. “Perhaps what the dues system does is even out the giving rather than get you more per capita.”

It is that aspect of the dues model that some Christian leaders say they admire. Without required annual dues, the Rev. Elizabeth Garnsey of Heavenly Rest said, many parishioners don’t invest in their church. “I would like to see us become more clear about what membership is, mainly because it empowers the people to feel they own this place,” she said of Heavenly Rest. “They belong here, and they should raise their voices about what they want and then be willing to pay for it.”

Other Christians expressed discomfort with their own system. “If pastors could get their money some other way, they would be delighted to,” Hudnut-Beumler said. With the abandonment of pew rents, it became the duty of the pastor to convince members to give. Hudnut-Beumler continued, “Every minister, by virtue of this financing scheme, had to become a salesman.”

Meanwhile, Jewish leaders say that the dues model is entrenched, irrespective of its merit. “If we eliminated dues tomorrow and said to the congregation, ‘Tithe your income,’ we’d go out of business in a year,” said Rabbi Ammiel Hirsch of New York’s Stephen Wise Free Synagogue. “Large swaths of American Jewry have in fact adopted a fees-for-services approach, and their commitment is not at a high enough level to make the kind of contributions that would allow us to fund our synagogue in a different way — for example, through tithing.”

Next: What do churches and synagogues do with the money that they raise? And what does this say about why people give to religious institutions?