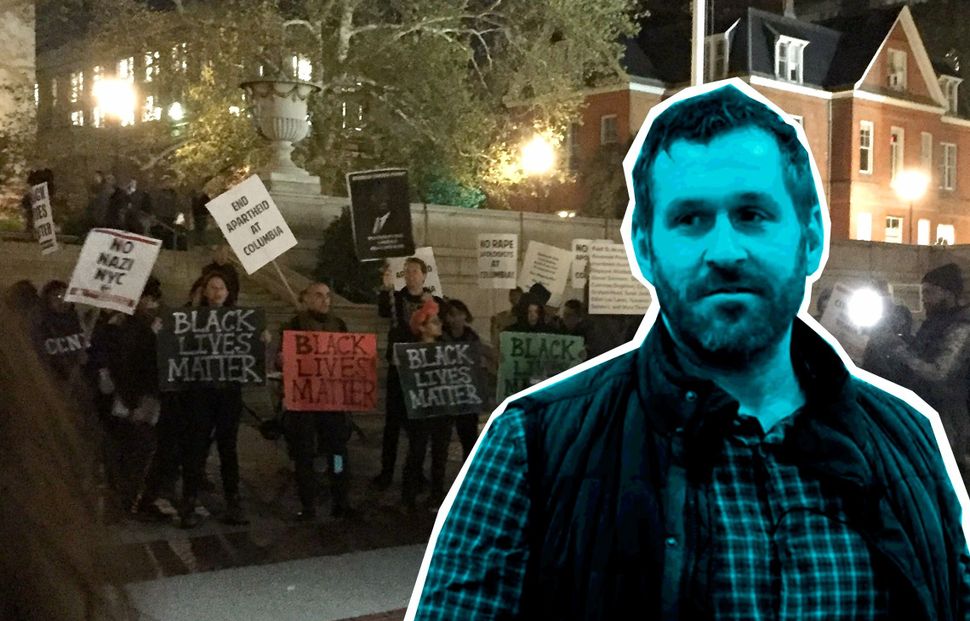 Joey Siegel was against bringing the “alt-right” provocateur Mike Cernovich to Columbia University, but was overruled by his fellow members of the College Republicans student executive board.

The fears of Siegel, who was slammed in threatening campus flyers that were plastered across campus, were proved correct when Cernovich drew what one security official described as the biggest protest in six years on the Manhattan campus.

Hundreds of students showed up Monday to protest the speech by the man perhaps best known for propagating the “Pizzagate” conspiracy theory that Democrats were running a pedophilia ring underneath a Washington, D.C., pizzeria.

Others interrupted his speech inside Alfred Lerner Hall, where the event took place.

The protesters held signs reading “Free speech for who?” and “End apartheid at Columbia.”

“Punch a Nazi in the face — every nation, every race,” the group chanted. Many of them were dressed all in black and had their faces covered.

Many protesters were able to storm through security barricades outside Lerner and make their way into the building.

Some made their way into the auditorium, while others occupied the building’s lobby (to mixed reactions of other students trying to exit their orchestra practice or eat in the nearby cafeteria).

The speech itself was slightly more low-key, though still confrontational. Around 40 people were in the auditorium, with some protesters holding signs saying “You’re fake news” and “You lie.” Club president Ari Boosalis introduced Cernovich, saying in his remarks that his group did not endorse Cernovich’s views.

As soon as Cernovich entered, he was met with resistance.

“You are my marketing intern,” Cernovich replied.

Cernovich was frequently booed and hissed during his talk, which bounced between expounding on his unique brand of journalism, pedophilia allegations against Kevin Spacey, and what he saw as mainstream media bias of figures like CNN’s Jake Tapper.

“The reason citizen journalism is on the rise is because we’re telling stories no one wants to tell,” he said.

During the occupation of the lobby, minority students spoke about what they described as the culture of “white supremacy” that was enabled by Columbia allowing Cernovich to speak.

One speaker tried to allude to a famous poem about the Holocaust by Martin Niemoller, but kept correcting himself and starting over. “If it was only up to the Jews, nothing would happen. Well, nothing did happen,” he eventually said.

Reaction from outside observers to the protests was mixed.

Jordan Klein, who was visiting a friend on campus, called Cernovich “the biggest joke in the ‘alt-right.’” He claimed that the College Republicans “invite ‘alt-right’ speakers because they want to piss people off.”

Cernovich has also called Islam a “death cult” and said that diversity is “a codeword for ‘white genocide.’” But he calls himself an “outspoken critic of anti-Semitism,” and is a supporter of Republican Senate candidate Josh Mandel, who is Jewish. However, Cernovich frequently decries Jared Kushner and others as “globalists,” a term that some see as an anti-Semitic dog whistle. He has claimed that the Anti-Defamation League, which put him on a watch-list of the “alt-light,” is “trying to get my family murdered”.

The College Republicans said on their website that they invited him “in order to better understand Mr. Trump’s presidency, the rise of new media, and Mr. Trump’s electorate.”

In the lead-up to the event, the entire College Republicans board was doxxed by a New York anti-facist group, with their names and photos from their private Facebook pages pasted on posters distributed around campus. Using vaguely threatening language, the flyers criticized the group’s decision to invite Cernovich, urging readers in each case to “let him [or her] know what you think.”

Ironically, Siegel claimed he had been against inviting Cernovich and Tommy Robinson, a prominent British anti-Islam activist who spoke to the College Republicans earlier this month amid protests.

“I am more interested in other speakers,” he told the website Campus Reform. “That said, there is some value in bringing them; these guys, whether we like them or not, are not going away once we graduate and enter the real world.”

Days later, Siegel was forced to defend his group at a student council meeting after the Black Students’ Organization unsuccessfully demanded that the council pull funding from the College Republicans.

Tensions have been fraught on campus for weeks over the College Republicans’ controversial speakers.

In early October, Robinson was invited by the group to speak to it via Skype (Robinson is reportedly barred from entering the United States). More than 30 student protesters stormed the auditorium, shouting questions at Robinson and disrupting his answers, eventually forcing Robinson to cut his talk short.

Boosalis told the Spectator last month that he was committed to representing the diverse opinions of his membership.

“It’s not my duty to define, ‘We’re gonna bring this type of speaker,’ you know, that’s not my job,” he said. “My job is to bring a wide variety.”

After Cernovich exited the building, escorted by the New York City Police Department, the protesters, feeling triumphant, began to disperse across campus.