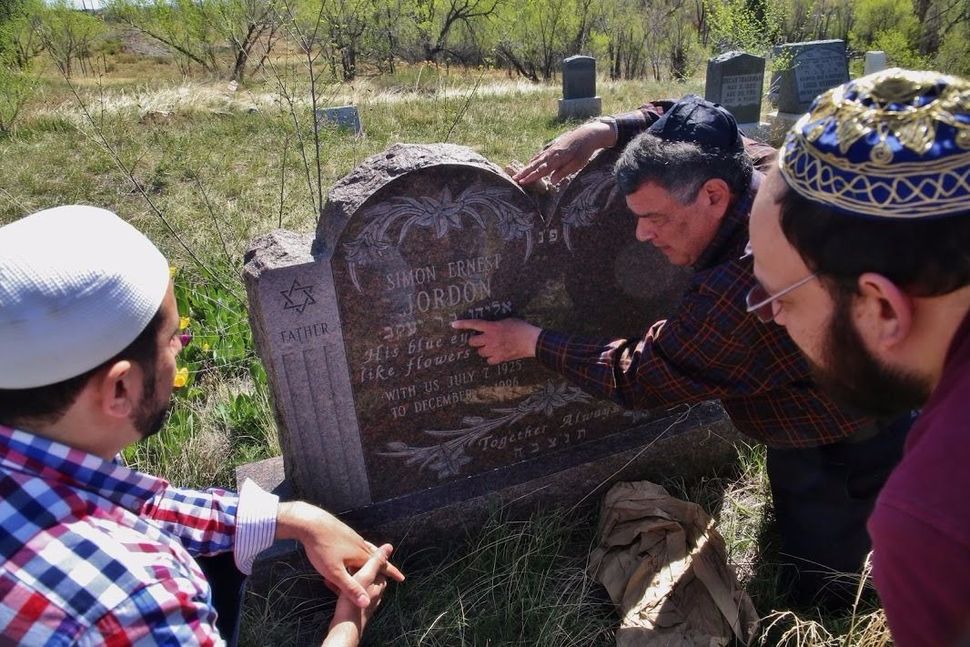 Tarek El-Messidi of Celebrate Mercy tours the Golden Hill Cemetery in Colorado. Celebrate Mercy has disbursed $30,000 of a planned $100,000 to the Jewish cemetery. Image by Launch Good

After many months of waiting, and some doubts that the money would ever materialize, a rundown Jewish cemetery in Colorado has received $30,000 from a crowdfunding campaign publicized by the controversial Palestinian-American activist Linda Sarsour.

Golden Hill Cemetery, which contains the graves of more than 800 people dating back to the 19th century, will use the first disbursement of a planned $100,000 grant from CelebrateMercy, a not-for-profit that “teaches about the Prophet Muhammad’s life and character,” to repair fencing around the property.

Some in the Jewish community were skeptical that a harsh critic of Israel like Sarsour was legitimate in her sincerity to raise and distribute money for Jewish causes, but after delays chalked down to inexperience and the vagaries of the Jewish and Muslim calendars, a donation has finally been received.

“We received the first large check from CelebrateMercy a number of weeks ago,” the executive director of the cemetery, Neal Price, told the Forward. Price called the payment a “very significant amount,” but he declined to say exactly how much that amount was. But CelebrateMercy announced last month on its Facebook page that it had sent a $30,000 check.

The fundraising effort, launched by Sarsour and by CelebrateMercy’s Tarek El-Messidi, raised more than $162,000 in response to a wave of anti-Semitic cemetery desecrations and vandalization at the beginning of the year. Cemeteries in St. Louis and in Rochester, New York, and a synagogue in Chicago, have already received a combined $50,000 from the campaign, with $100,000 pledged to Golden Hill Cemetery.

Golden Hill is one of only three Jewish cemeteries listed on the National Register of Historic Places. Ted Ruskin, a community member who is legally blind, has taken care of it for nearly 30 years. Local TV station Fox 31 reported in 2015 that the site had “overgrown grass, broken tombstones, missing grave markers and an old gate with incomplete fencing to protect the area from vandals.”

Sarsour’s presence as part of the fundraiser was greeted with skepticism by some in the Jewish community who did not appreciate her advocacy for the anti-Israel boycott, divestment and sanctions campaign or her public support for convicted Palestinian terrorist Rasmea Odeh, whom she embraced at a Jewish Voice for Peace event in April.

Citing her history, New York State Assemblyman Dov Hikind cast doubt in May that Sarsour’s fundraising effort was legitimate, and the journal The Algemeiner reported in July, before Golden Hill had received any funds, that Price “has no expectation that he will ever see the CelebrateMercy money.”

“One minute she’s claiming to be a disciple of the great Dr. Martin Luther King Jr., and the next she’s standing with a terrorist onstage at an event, and singing praises of that terrorist to an audience,” he said. “I won’t be the least bit surprised to hear that her little Jewish cemetery publicity stunt wasn’t quite what she made it out to be.”

After being informed that Golden Hill had received a payment, Hikind released a statement to the Forward: “Linda Sarsour’s record of supporting terrorists and glorifying terrorism is well documented. Her fondness of dead Jews is apparent, so supporting a Jewish cemetery would fit her social profile. Nevertheless, my office spoke with Neal Price of Golden Hill Cemetery on numerous occasions after Sarsour publicized her fundraiser. At that time, Mr. Price had neither heard from Sarsour nor her surrogates, and he did not anticipate receiving a dime for Golden Hill Cemetery. If money has now been delivered because of our publicizing the nonreceipt of those funds, then we certainly did our jobs.”

Celebrate Mercy claimed in a Facebook post written the day after the Algemeiner article was published in July that “discussions on this project were put on a brief hold during the Muslim fasting month of Ramadan [May–June] but are now resuming.” Sarsour said last week that the fundraising organizers “weren’t prepared to spend $160,000” and didn’t originally know how to proceed in distributing so much money.

Price now says that another reason they received the money only recently was due to the Jewish holidays in September and October.

“A lot of the delay has been on the cemetery’s part,” Price said. Overseeing the cemetery is a part-time, six-to-eight-hour-per-week job for Price, who is also the executive director of The Hebrew Educational Alliance, a synagogue in Denver. His work at the synagogue took precedence during the High Holiday season, but the end of that period allowed him to focus more on the cemetery’s refurbishment.

Price said that he was still soliciting estimates for how much the fencing will cost — though he said that Celebrate Mercy’s payment was “more money than the first estimate.”

He expects the fence work to begin after the new year, weather permitting. “Part of [the cemetery’s border] is along a major thoroughfare… so we’d like to put up something a little bit nicer,” he said.

Price added that future payments from Celebrate Mercy will help fund the next phases of the cemetery’s redevelopment: refurbishing the cemetery’s land itself, and repairing old gravestones and adding new ones to unmarked graves. He explained that Celebrate Mercy’s support was especially significant as a multiplier effect, because it allowed the cemetery to apply for a 3:1 matching grant from History Colorado, the state historical society.

Price said that working together with El-Messidi was a productive process.

“We’re putting together the second-phase proposal with Tarek, but we need to make sure it complies with the state’s guidelines,” Price said. For example, the state cannot pay for religious objects like Jewish tombstones, but it can help with regrading the land.

In a way, he said, the delay proved to be advantageous. “This gives us a chance not only to have wonderful donations from Celebrate Mercy, but also [to] leverage historic grants,” he said. “It’s worth waiting six months to get a 3:1 match.”

“As the project progresses, once we get to a point where everything is really nice we will have a rededication ceremony,” Price promised. “We will have a suitable way to pay tribute to Celebrate Mercy.”