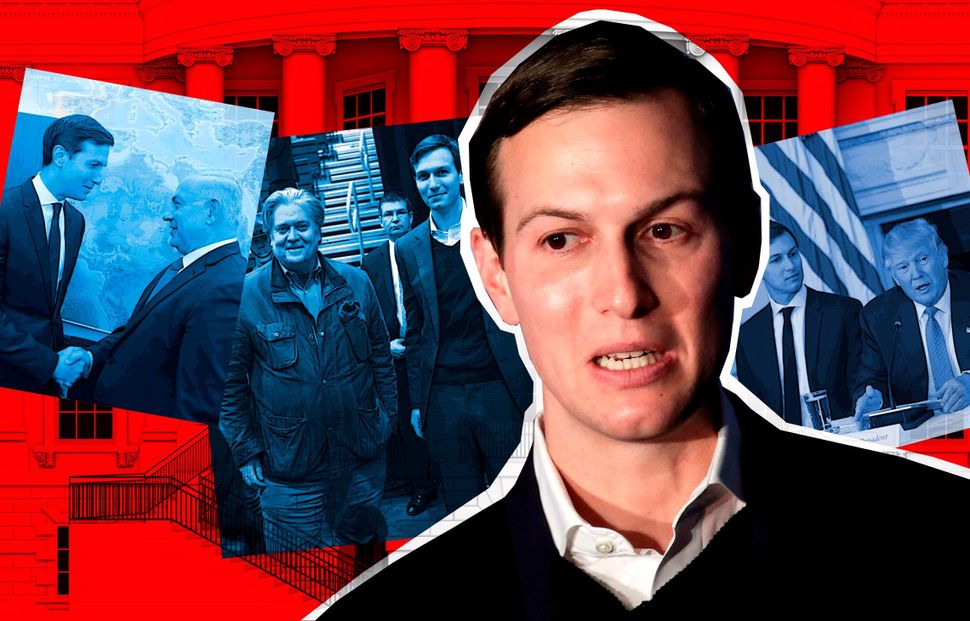 Jared Kushner and Ivanka Trump moved to Washington last January, only to find photographers parked outside their new home in the Kalorama neighborhood round the clock. Rumor had it that a good pic of the first daughter and son-in-law, preferably pushing a stroller or walking hand-in-hand with their toddlers, would fetch $500 for an enterprising paparazzo.

Months have passed and Javanka, as Steve Bannon mockingly calls the Jewish power couple, became a fixture of Washington life. A photo of them walking to synagogue on Shabbat, or dropping off the kids at school, is no longer a major scoop.

But the political and legal spotlight on Kushner has only become harsher — and a blockbuster new political book detailing his feud with Bannon seems certain to keep the heat on him.

Kushner’s first year in Washington has been a humbling experience. He started off as the world’s most famous son-in-law and closest adviser to President Trump. His wife’s dad put the wunderkind in charge of an impossibly broad portfolio.

He starts 2018 with a much more limited focus on Middle East peacemaking. He is battling the Russian election interference investigation — and fending off attacks from the far right.

Wolff also suggests Bannon intends to intensify his war on so-called “globalists” in Trump’s inner circle, a term that many consider a none-too-subtle reference to Kushner and other Jews.

“It is a war between the Jews and the non-Jews,” Henry Kissinger tells Wolff in the book “Fire and Fury: Inside the Trump White House.”

The book also includes a string of unflattering tidbits about both Kushner and Ivanka Trump, including the claim that President Trump derided his son-in-law as a sycophantic lightweight.

Wolff also writes that Ivanka Trump often mocked her father’s infamous combover hairstyle and boasted that she would be the first female president.

President Trump lashed out at Bannon after the book went public Wednesday, calling him an opportunist who had “lost his mind.”

“Steve is learning that winning isn’t as easy as I make it look,” Trump said in a statement. “Steve had very little to do with our historic victory.”

Still, the anecdotes in the book and Trump’s angry reaction to it suggest that Kushner will have to negotiate an even more treacherous and volatile political environment in the coming months.

There is little to indicate that he is equipped to handle the challenges effectively.

Expectations from Kushner were set to the highest level possible. In a White House led by a president devoid of any government experience, Kushner was supposed to be the brain behind the system, the cool head offsetting Trump’s mercurial conduct, and the moderate force balancing the extreme wing led by Bannon.

Reality proved to be more challenging for a fairly successful 36-year-old real-estate businessman.

First, critics pounced on the tendency of the Trump administration to put Kushner in charge of everything: from renegotiating North American Free Trade Agreement, handling the opioid crisis, dealing with China and, of course, bringing peace to the Middle East. He was also put in charge of Trump’s Office of Innovation, a new entity that has responsibilities that were not defined from the start, and has little to show a year later.

To be sure, Kushner is widely credited with straightening out entrenched organizational problems at the Veterans Affairs administration, but on most other issues his imprint was hardly noticed. This past November, The Washington Post came to describe his role as “shrinking,” especially after John Kelly took over as chief of staff. “His once-sprawling White House portfolio, which came with walk-in privileges to the Oval Office, has been diminished,” the Post reported.

Kushner even found it difficult to calm President Trump’s volatile temperament. Early on in the presidency, a widespread notion seemed to attribute Trump’s worst Twitter outrages to Kushner’s Sabbath observance, which prohibited him from working on Saturdays. But it soon became clear that the commander in chief could launch Twitter attacks on any day of the week, regardless of which Jewish traditions obligate his son-in-law.

Kushner was also unsuccessful in blocking or neutralizing policies that seem to have come directly from the Steve Bannon-Stephen Miller playbook and were adopted by Trump. He tried and failed to argue against ending the Deferred Action for Child Arrivals arrangement for undocumented immigrants known as “dreamers,” and could not stop Trump’s decision to reverse the policy allowing transgender people to serve in the military. Kushner and Ivanka Trump were unsuccessful in their efforts to sway Presiden Trump’s reaction to the events in Charlottesville, North Carolina.

At times, when he couldn’t make the president budge, Kushner simply withdrew. Such was the case with the president’s decision to pull out of the Paris climate accord. Trump celebrated the decision in a Rose Garden speech, stating he was elected to represent “Pittsburgh, not Paris,” but Kushner and Ivanka Trump were nowhere to be found. The couple chose not to show up to work that day, instead, walking with their children to the Chabad synagogue for Shavuot services.

And then came the Russian investigations conducted by special counsel Robert Mueller and by Congress. Each round of inquiry revealed another meeting or correspondence that Kushner failed to disclose, ending with widely reported claims that he had been the senior campaign official in touch with George Papadopolous and Michael Flynn, both of whom pleaded guilty to charges related to their work on the campaign. Kushner is now seen as the missing link tying Trump and his inner-circle to his campaign’s ties with foreign powers.

On the positive side, Kushner can chalk up points for his personal relationship with Saudi Arabia’s crown prince Mohammad bin Salman. Kushner’s surprise trip to Riyadh and his 4 a.m. meeting made him the top contact with the man poised to take over as the most powerful leader in the Arab world. Kushner’s dealings with the Saudis highlighted the qualities that helped him in private business: courting the Saudis on their terms, offering high-value arms deals in informal channels, and identifying the key power brokers worth of his time and attention.

In the coming weeks and months, Kushner and his team of peacemakers (made up, as he himself described, of “three Orthodox Jews and a Coptic Egyptian” who has since left) will try to formulate the Trump plan for Israeli-Palestinian peace, or as it is now referred to, “the ultimate deal.”

“Limiting his responsibilities may have been a good thing,” said an Israeli official who had been in touch with Kushner and his team. “He’s focused on the [Middle East] issue and he doesn’t look as if he’s under pressure.”

Here, too, Kushner has tumbled from the loftiest heights. Early on he boasted about not needing a “history lesson” and having “read enough books” about the Middle East conflict. But as the process evolved, Kushner found himself reaching out more to former and current players and adopting the key tenets of Middle East peacemaking that view a peace accord as the key to stability in the entire Middle East and a focus on “solving the big issue” instead of incremental confidence-building measures.

Middle East peace brokering could be Kushner’s redeeming moment as he enters his second year in Washington. If he succeeds where presidents, secretaries of states and top diplomats have failed in the past, Kushner’s legacy is safe. But with prospects for peace low even before Trump took office and lower after the presidential recognition of Jerusalem as Israel’s capital, it is a long shot.

A recent Vanity Fair article described Jivanka as finally settling in, getting used to “the swamp” of Washington politics, learning to deal with criticism and frustration. In an interview with The Washington Post, the only on-record interview he did since joining the administration, Kushner made clear that despite his initial view of the position as being temporary, he now sees his future with the Trump White House. “We’re here to stay,” he said, promising that they might even be house hunting soon for a more permanent residence in the nation’s capital. The Kalorama mansion is just a rental.