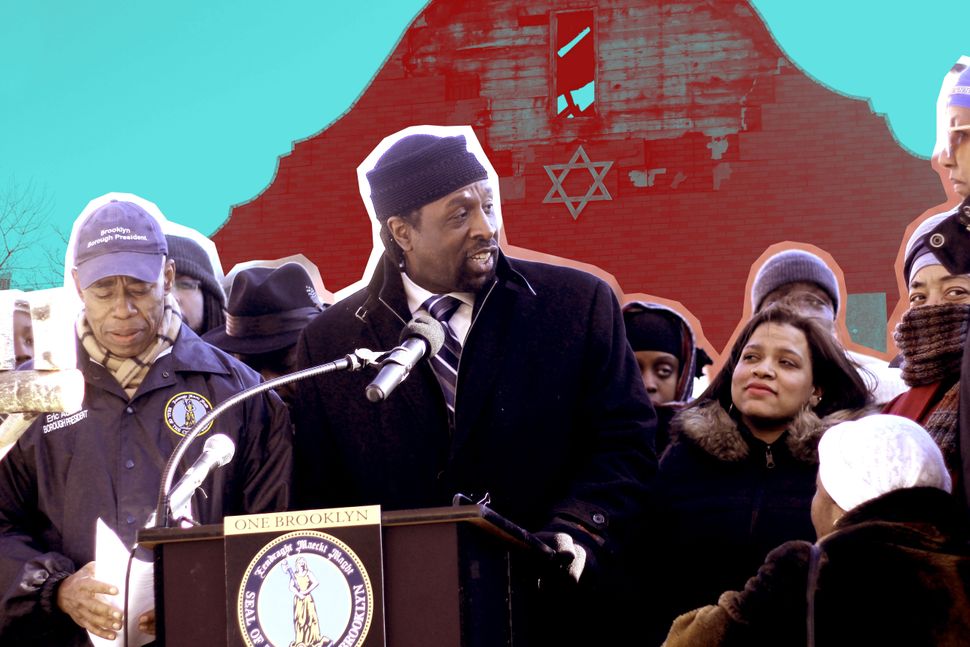 Standing beneath the charred remains of their synagogue, members of Brooklyn’s Hebrew Israelite community mourned the destruction of their historic house of worship. B’nai Adah Kol Beth Israel was gutted by an accidental fire last month and the building now stands vacant and boarded up. There are gaping holes in the roof, with beams poking through like broken ribs.

“I feel like I lost a piece of myself,” said Naphtali Israel, a 72-year-old elder. “I was heartbroken, I was stunned.”

On a bitterly cold December afternoon, a small crowd gathered to rally for their rebuilding campaign. A dozen members of the community, the Brooklyn Borough President Eric Adams and a local church leader held a rushed press conference on a nearby street corner. The community has raised more than $20,000 in an online fundraising effort, but is still a ways away from raising the $1.5 million goal on a GoFundMe page towards the building’s repair. 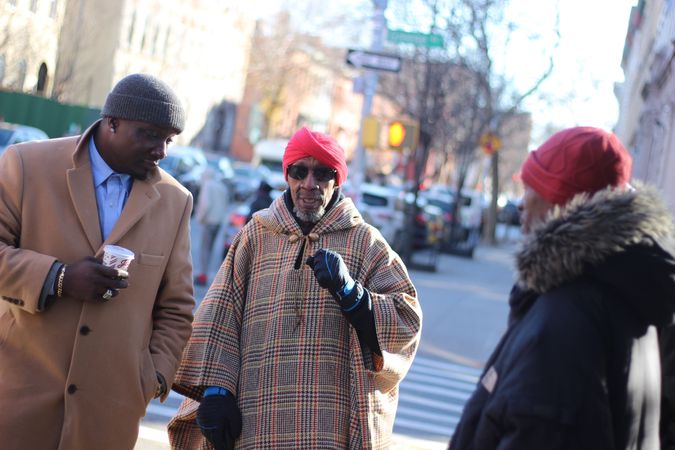 Rabbi Baruch Yehudah, the leader of the synagogue, stood behind a makeshift press podium and vowed to rebuild. Jews observe Hanukkah this week, he said, a holiday that commemorates the desecration of the ancient Temple in Jerusalem — but also the miracle of light and renewal. “We have rededicated ourselves,” he said, “to ensure that this temple will rise again on this spot on this corner.”

Adams, who has helped the congregation drum up support, praised the building as an “important part of Brooklyn’s historical religious dynasty.” “Often we say that Brooklyn is the borough of churches,” he said, “but Brooklyn is also the borough of synagogues.”

The blaze that gutted the building began on the morning of November 14 when contractors inadvertently set fire to a patch of tar while doing leak repairs on the roof with a blowtorch. The flames spread immediately, raging through the attic and along the roofing beams. The fire department had to smash through portions of the ceiling, including a central stained glass window, to put out the fire. Members of the congregation rushed to the scene to watch in shock, some weeping openly as press swarmed the scene. Firefighters were able to retrieve the torahs, though the scrolls sustained some damages.

As #Hanukkah begins, I joined #BedStuy’s Congregation B’Nai Adath Kol Beth Yisrael as we pursue the #miracle of rebuilding their synagogue from a devastating fire last month. Thanks to all who are contributing support, including @HomeDepot, Express Lumber, and Midwood Lumber. pic.twitter.com/dozeK94tcq

After the borough president had spoken and the TV cameras packed and left, community members milled on a street corner nearby, drinking coffee out of paper cups. Some were still taking in the sight of their congregation in shambles.

Nasik Rav Yisrael, a longtime member, stood nearby bundled in a long coat with a black beanie pulled over his ears. “We will rebuild,” he said.

“We’ve been displaced,” said Naimah Owens, a 73-year-old congregant from Long Island. Owens joined the congregation when she was a teenager decades ago and wore a glittering Star of David pendant on her forehead. “We don’t have a home now.”

B’nai Adath is one of half a dozen congregations in the New York area associated with a group called the International Israelite Board of Rabbis. The Board represents just one community in the larger Hebrew Israelite movement. Its chief rabbi, Capers Funnye, is famously cousins with Michelle Obama and has worked for years to build bridges between his sometimes-guarded community and mainstream Jewish organizations.

The synagogue has housed the Hebrew Israelite communtiy since 1967 and was previously an Ashkenazi Orthodox synagogue dating back to the 1800s. Before the fire, much of the building’s interior had looked frozen in time. The sanctuary was lined with worn wooden pews and the bimah was adorned with antique iron light fixtures. There was balcony seating and an ornate carved ark for the Torah.

But maintaining the large building had been an issue for years — and the community has struggled to repair sections of the old structure which have sagged and crumbled over time. The building was in the middle of an ambitious renovation before the fire broke out.

This branch of the Hebrew Israelite movement traces its roots to another iconic New York synagouge known as the Commandment Keepers, founded in Harlem in 1919 by a Caribbean-born cleric named Wentworth Arthur Matthew. Like other black Israelite leaders of his generation, he taught that black Americans were the true children of Israel and that they must return to their forgotten heritage. One of Matthew’s students formed B’nai Adath in the 1950s and the community originally gathered in a brownstone apartment nearby.

Community members tell a story about how they acquired the B’nai Adath building: a group of young men from the congregation admired the then-vacant Orthodox synagouge and kneeled down on the street, praying that they might someday make the building their own. A few years later, the lore goes, their prayers were answered. The structure went up for sale and they moved into the spacious building, which could seat more than 1,000.

Through the decades, the synagouge became a central gathering place for the community. Major events here held here over the years, like the formalization of the Israelite Board in the 1970s and special annual services that would draw hundreds from accross the region.

B’nai Adath is also known for its musical tradition; worship services were accompanied by a troupe of young drummers, who would assemble near the bimah and offer lively accompaniment to the liturgy. During the summer, the sound of drumming would carry into the street through open windows; on some afternoons, the troupe would even play outside.

Funnye, the Board’s chief rabbi, was in town last week to support the beleaguered congregation. He stood on the street, shaking hands and hugging congregants. “My heart was broken,” he said. “B’nai Adath is one of the oldest places we have.”