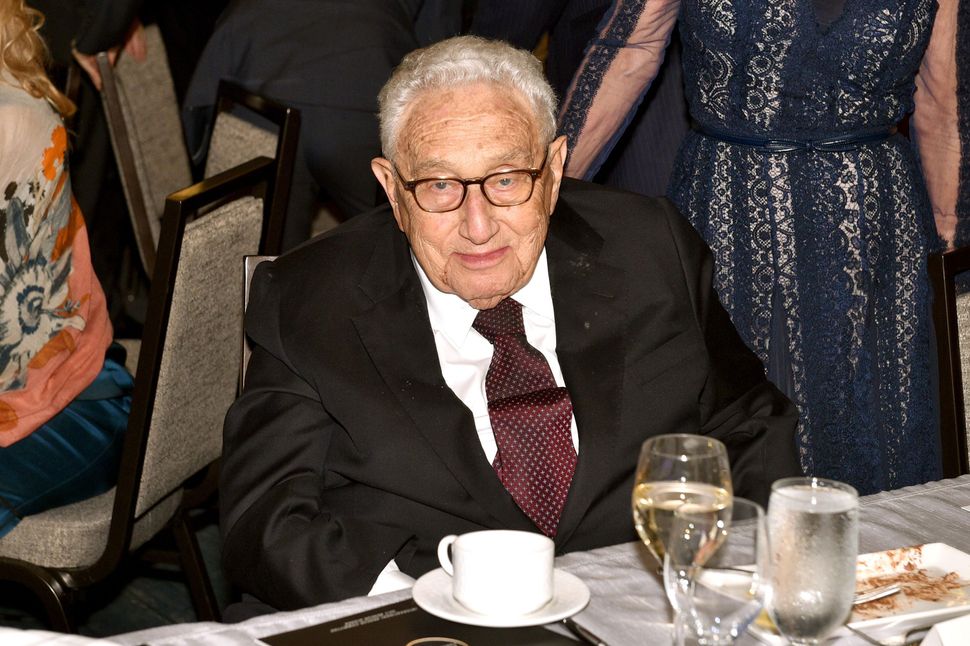 Henry Kissinger knows a few things about wars, about Jews and about the White Houses.

But his quip to journalist Michael Wolff on the subject, as quoted in Wolff’s bombshell new book about President Trump and his circle, is setting some heads a-scratching.

“It is a war between the Jews and the non-Jews,” Kissinger, the former secretary of state and national security adviser to presidents Richard Nixon and Gerald Ford, told Wolff of the Trump White House.

The full context of the quote is unclear, as the text of Wolff’s “Fire and Fury: Inside the Trump White House” is not publicly available as of this writing.

But based on a report in The Guardian, it appears that Kissinger’s glib quip was an attempt to characterize the clash between former Trump chief adviser Steve Bannon on one side, and Jewish Trump family members Jared Kushner and Ivanka Trump on the other.

So what was Kissinger, whose roles in U.S. interventions in Chile, Cambodia, Laos and Vietnam, among other nations, led to millions of deaths, getting at in his quote to Wolff?

Jonathan Sarna, a professor of Jewish history at Brandeis University, noted that Kissinger’s own political rise coincided with a certain sort of Jew’s defection to the Republican Party. Many of the so-called “neoconservatives” supported Nixon over his Democratic rival, George McGovern, in 1972. And while many of those Jews and their ideological heirs count among today’s so-called #NeverTrump-ers, they also stand opposed to the economic nationalism of Bannon.

Perhaps Kissinger saw in the White House scuffles a sort of battle for the soul of the Republican Party: between a Jewish-inflected moderate wing and a culturally non-Jewish hard core.

“Jewish Republicans have been different from the kind of paleoconservative Republicans, and that battle goes back a long way,” Sarna said. “What none of us know is whether the neoconservatives will come back to the Republican Party if there’s a different man at the top.”

But some close observers of the White House question the former secretary of state’s analysis, even as they giggled at the zinger.

“There’s so many Jews in this administration, you can’t really have the Jews and the non-Jews,” one friend of the president told the Forward.

While it’s true that Kushner and Ivanka Trump’s perceived allies, among them Trump’s chief economic adviser, Gary Cohn, are largely New York Jews, the Bannon team, both inside and outside the White House, is similarly heavily Jewish.

Stephen Miller, a senior Trump adviser seen as the last remaining Bannonite in the White House, is Jewish. So are many of Bannon’s post-White House colleagues at the news organization he now runs, Breitbart Media, including Breitbart editor-in-chief Alex Marlow.

A fight between the Jews and the non-Jews, then, seems a difficult analysis to substantiate.

Another close observer of Jewish politics said that while Kissinger’s framing of the internal White House war as a fight between Kushner and Bannon was certainly a common one before Bannon’s exile in August, it also seems to have been an oversimplification.

“It seems like it was sort of everybody against everybody,” the close observer said. Reince Preibus versus Bannon. Bannon versus Jared Kushner. “Traditionally in the White Houses there are a couple of power centers that fight with each other,” the observer said. “In this White House it seems like each of the power bases all fought with each other.”