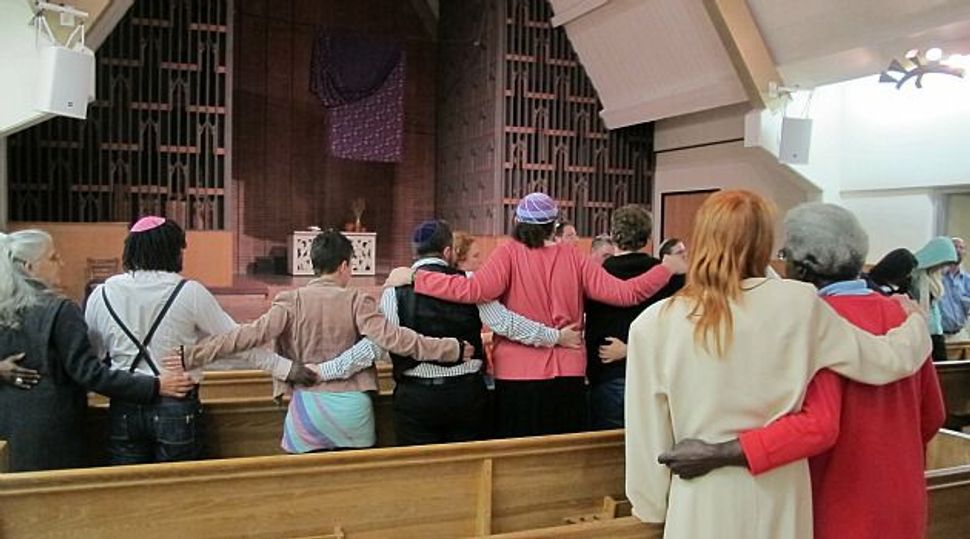 Speaking Up: Transgender Jews celebrate shabbat at a California synagogue.

Orthodox leaders are demanding changes in a proposed Jewish communitywide policy backing rights for transgender people over concerns that it won’t allow enough space for religious exemptions, the Forward has learned.

The Reform movement and its partners submitted the proposed policy to the Jewish Council for Public Affairs, which operates as a sort of parliament for the American Jewish establishment, debating and adopting resolutions that are supposed to set guidelines and priorities for the entire community. Now the policy is caught up in a heated internal debate after the Orthodox Union, which represents hundreds of mostly Modern Orthodox synagogues, objected to the draft. JCPA’s bylaws give the O.U. and other religious denominations veto power.

“We reserve the right to veto any resolution that we feel violates our conscience,” the O.U.’s national vice president, David Luchins, told the Forward. “We last did so in 1988. We prefer to achieve consensus.”

The resolution is currently the subject of negotiations between the O.U. and the resolution’s backers, chiefly the Reform movement’s Religious Action Center and the Anti-Defamation League.

If approved, the resolution on transgender rights would notionally commit every mainstream national Jewish organization and Jewish community relations group in the United States to support laws and policies that prohibit discrimination based on gender identity and gender expression.

A very recent draft viewed by the Forward also affirms the right of people “to use the pronouns with which they identify,” and prescribes staff training on discrimination and inequality faced by transgender people.

The recent draft offers little support for religious exemptions on transgender rights issues, stating only that “support for the inclusion of a narrow, carefully drawn exemption for religious institutions, consistent with the First Amendment, is warranted.”

Liberal Jewish activists in recent years have grown wary of broad religious exemptions, as right-wing groups have used them to push back against progressive policies. Some see a high-profile case argued this past December before the U.S. Supreme Court involving a Christian cake maker as an effort to use religious exemptions to undermine nationwide same-sex marriage rights.

“There’s a difference of opinion on religious exemptions these days, because too often those exemptions that many of the JCPA organizations had a hand in crafting, and have long advocated for, are in some cases being used as a sword rather than a shield,” said Barbara Weinstein, an RAC official who has been negotiating the resolution on behalf of the Reform movement. “As the legal and court landscape changes, those conversations have been happening throughout the Jewish community.”

Yet for the Orthodox advocates, the lack of a strong religious exemption written into the transgender rights resolution is a major sticking point. They fear that Orthodox institutions, like yeshivas, could risk censure or funding cuts from other Jewish groups if they fail to follow the resolution’s strictures.

“The O.U. comes from a place where its concerns are based on its understanding of halachic law,” said David Bohm, who chairs JCPA’s policy committee and has been involved in mediating between the Reform movement and the O.U. “The sponsors, also, I think have some legitimate concerns about how religious exemption language has been twisted.”

Similar disputes have stymied the JCPA policies on gay rights issues in the past. In 2013, a proposed resolution supporting civil unions failed amid infighting.

“Unfortunately, over the last at least decade or so, JCPA has been behind the 8 ball on LGBT civil rights issues,” said Jeremy Burton, executive director of the Jewish Community Relations Council of Greater Boston, one of the co-sponsors of the transgender rights resolution.

Despite its democratic pretensions, the JCPA resolution process is, at least in is early stages, quite secretive. Before draft resolutions are sent out for public comment, member organizations are allowed to review them and raise objections. By the time a resolution becomes public, contentious proposals have already been internally debated and, often, thoroughly amended.

JCPA insiders expressed displeasure that the Forward had learned about the debate over the transgender rights resolution before the national agencies had reached a compromise and the text was made public. “The process works very well,” Luchins said. “It’s a shame it was not given the opportunity to work out the way it usually does.”

JCPA’s executive director, David Bernstein, told the Forward that regardless of whether the resolution on transgender rights is ultimately adopted, there is inherent value in the internal debate.

“We don’t always reach consensus, but we always try,” Bernstein said. “In my view, the conversation itself among diverse parties is more important than the immediate policy outcome on any one issue.”

If the Reform movement and the O.U. come to an agreement, the resolution will be voted on at the plenum in April.