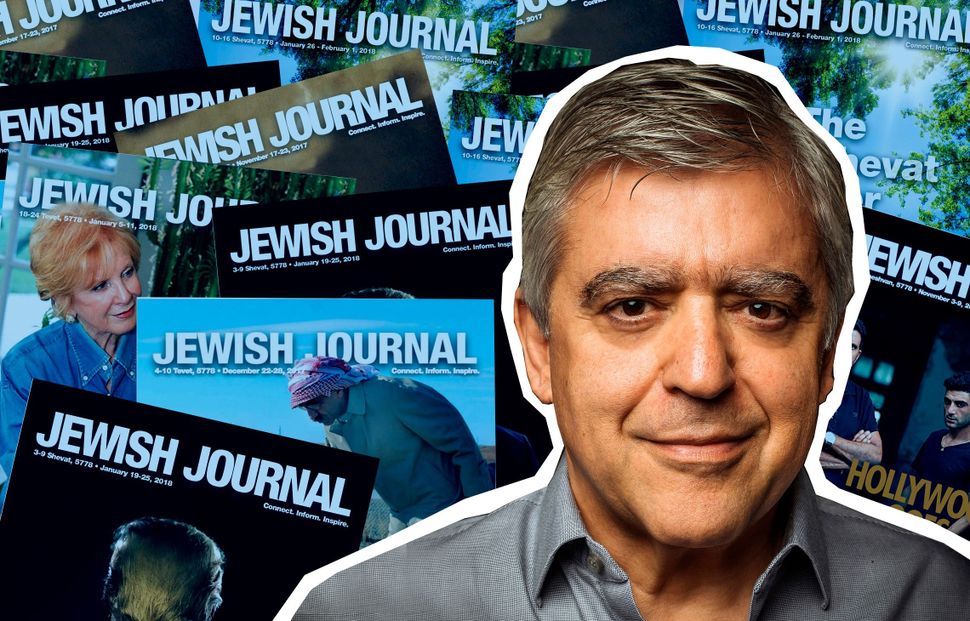 The Jewish Journal of Greater Los Angeles is one of the country’s biggest Jewish publications, with 50,000 subscribers. It covers the ins and outs of heavily Jewish Hollywood. And it publishes big-name journalists like Ben Shapiro, whose podcast is consumed by a million people every day.

Since October 1, 2017, however, more than a third of the entire staff has turned over, the Forward has learned. That was the day the company president, David Suissa, who managed the business side of the operation, took on the duties of the editor-in-chief as well. Suissa says he’s brought on his own people, as any new manager might do. Some of the folks who have left say the departures of key personnel signal an abrupt — and thoroughgoing — transformation of the community publication: It was liberal leaning and newsy and is now more politically conservative and focused on culture and commentary.

“The Jewish Journal as a news organ has ceased to exist,” a former employee told the Forward. “It no longer reflects our mission statement: to connect, inform and inspire.”

Founded in 1986 as a paper distributed by the local Jewish Federation, the Jewish Journal became independent in 2005. Since then, the influential paper won numerous local press awards for its coverage and commentary. But in 2009, during the worst of the financial crisis, it was forced to cut staff and salary. The Jewish Journal was rescued by an emergency cash infusion from a group of local Jewish philanthropists, including retail tycoon Peter Lowy, who is now chairman of the not-for-profit organization that owns the publication.

Suissa began running the organization’s business side the following year, after a successful career in advertising as well as publishing the Jewish magazine OLAM. He was named editor as well as president when the editor, Rob Eshman, stepped down in September after more than 16 years in the role. A Jewish Journal article last August announcing Eshman’s departure explained that he and Lowy worked together beginning in July to ensure a smooth transition for Suissa.

Since Suissa took over, according to three people with direct knowledge of the situation, numerous employees were fired, including a news editor, a culture editor, a web director, a community engagement director and multiple members of the advertising staff. He fired three people October 2, and new employees arrived October 3. Others have since resigned.

“Naturally I’m going to put a team together that’s my team,” Suissa told the Forward.

Saying he “didn’t do headcounts,” Suissa declined to give exact numbers, but he attributed the high turnover to restructuring, including the elimination of some jobs and the creation of new ones. He summarized his vision by repeatedly using the catchphrase “a design-driven community paper,” to describe what he wanted the Jewish Journal to become under his leadership, according to someone privy to those conversations.

The exit of trained journalists has led to a de-emphasis on hard news, former employees say.

The Jewish Journal staff now includes what Suissa describes as “a lot” of freelancers, as well as two of his daughters. “I have two family members that have come in just to help out,” Suissa said. “And I’m very happy that they’re doing a fantastic job.”

There is also a new emphasis on poetry. Poems used to take up a quarter of a page, and they now take up a whole page. Hannah Arin, a college student who is friends with Suissa’s daughters, has her poetry published almost every week. Arin is “terrific,” Suissa said.

The Jewish Journal’s cover stories so far in 2018 have been features on the holiday of Tu B’Shvat, the lives of Jews in Morocco and at the Sundance Film Festival, Israelis’ reactions to President Trump and the paper’s annual Mensch List.

“We cared about issues, and now, if we read it, it’s Jewish schlock,” another former employee said. “It’s like every other Jewish paper. It’s focused on spirituality and Jewish culture, and nothing that is news and how it affects the Jewish community.”

Suissa denies that the paper has abandoned community reporting. “We’re a weekly, so we can’t compete with the minute-to-minute Twitter news cycle,” he said.

Suissa says he’s trying to broaden his publication’s reach. “We’re trying to appeal to 100% of our community,” he said. “And some people are more interested in news, in politics, in Israel. Others have more of a cultural interest, and may be interested in poetry. So the Jewish buffet is very diverse, and we’re trying to honor that diversity.

“In terms of coverage of the community, we have at least as much as before. You could say there’s a little more emphasis on commentary.”

At least some readers have told the journal they like the changes. “The Journal is more engaging, friendly and respectful of the diversity of its readers,” Charles Portney of Santa Monica wrote in a letter to the editor in October. “Conspicuous by its absence is the biased, liberal-left diatribe that was so prevalent in previous editions,” Marshall Lerner of Beverly Hills added.

Pleasing every reader in Los Angeles was an impossible task, Eshman told the Forward in an email. Eshman, who says that he has not read the Jewish Journal since departing, noted that some readers mourned his leaving and others were thrilled.

“I loved the staff I had and miss them,” Eshman wrote. “I think the readership we created, the journalistic reputation we developed not just in L.A. but internationally, the awards we won year after year, the stories we broke, all speak for themselves. I didn’t expect such major changes, but I also understand a new leader has a right to a new team. I wasn’t the same editor in year 10 or 15 as I was in year one. There’s a learning curve.”

Much of Suissa’s first column as editor was devoted to praising the new contributors appearing in that issue, almost all of whom were writing commentary.

“I want to touch every member of our incredibly diverse community,” Suissa wrote. “I won’t always succeed. Some voices you will like more than others. Some voices will return, others won’t. It’s a journey we will take together. What I can tell you is that everything I do will come from the deep love I have for this community — and for all the interesting voices and stories I keep bumping into that I can’t wait to share with you.”