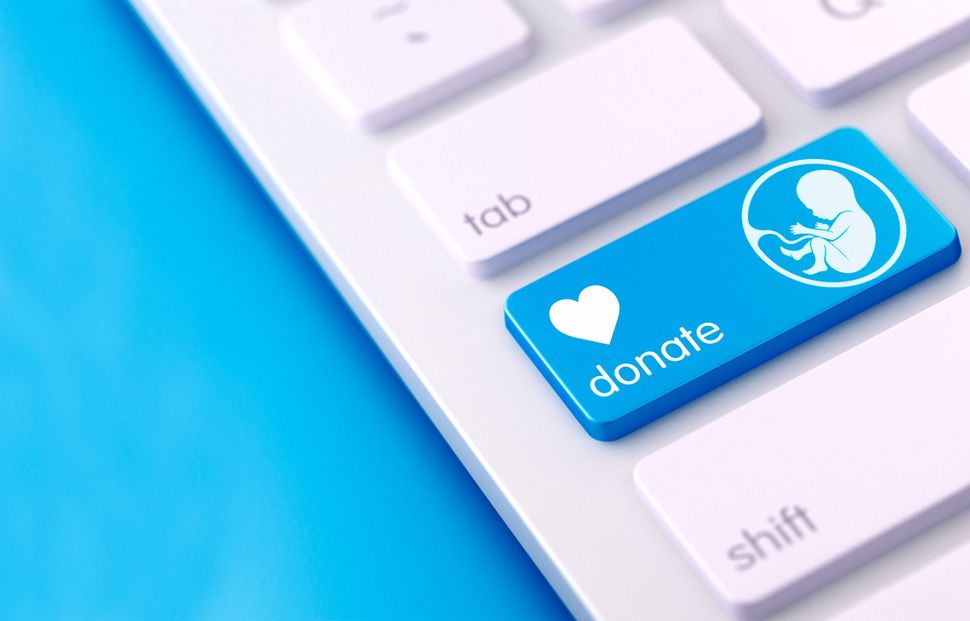 Amanda Naor has spent her life around children. Early in her career she worked as an infant caregiver. She met her husband, Spenser, while leading a production of “Peter Pan” at a children’s theater in Los Angeles. They took turns playing Smee.

But when it came time to have a child of their own, Naor was unable to conceive naturally. After four rounds of fertility treatment covered by their insurance, they were told they would need in-vitro fertilization to implant a viable embryo into Naor’s uterus. After liquidating their savings and securing an interest-free loan, the couple realized they would still be many thousands of dollars short of the considerable cost of treatment. So they made a GoFundMe page.

They were given nearly $14,000 over nine months, with word of the campaign spread by co-workers, friends and Naor’s Romanian-Israeli bubbe.

“She borderline threatened her friends into donating to us, in true grandmother-Jewish-guilt fashion,” Naor said.

The American Jewish community has poured hundreds of millions of dollars into sponsoring trips to Israel and providing scholarships for summer camp and day school, all in the interest of strengthening Jewish identity and encouraging the creation of Jewish families. But there is little institutional funding for fertility treatments — which means that many prospective parents have to get creative. While some lean on crowdfunding sites, others may fundraise privately or simply rely on family savings. But for nearly all young couples, paying out of pocket for the exorbitant costs of IVF and hormone treatments is not an option.

“Knowing what the costs could potentially be, it’s so daunting,” Naor said. “It’s crazy — one, to mourn the loss of having a child the natural way. But then the idea of having to go into debt or take out loans or sell a car, that’s just pouring salt into an open wound.”

Fertility treatments like IVF, egg donation and hormonal treatments are often not covered by health insurance. Only a third of large businesses cover IVF, and only 15 states require insurers to provide any kind of coverage for fertility treatments. Though the average cost of IVF in the United States is about $12,000, it can be double that amount in major cities like New York and Los Angeles.

There are a small number of not-for-profit groups that provide fertility treatment funding to Jewish prospective parents. The Jewish Fertility Foundation, in Atlanta, gives out $72,000 in grants a year — enough to cover six or so rounds of IVF. Hasidah, a not-for-profit based in Berkeley, has funded treatments for a dozen women since its founding in 2014; they’ve had six babies born so far. The Jewish Family and Children Services of Philadelphia has had a grant fund for couples in that region since 2012. The Jewish Free Loan Association, based in Los Angeles, has a fund dedicated to fertility treatments.

By comparison, the Birthright Israel Foundation doled out over $83 million in grants to fund free trips to Israel in 2015. In 2014, UJA-Federation of New York launched a $200 million day school scholarship campaign.

“For many people, they say, ‘If I’m gonna go through this, I need to at least already not be cash poor,” said Idit Solomon, founder and executive director of Hasidah. “For some, they’re like, ‘I might be able to pay for this, but I just can’t pay for it now.’”

Solomon said her organization has partnered with loan societies around the country to get matching loans for Hasidah applicants. They have an ongoing partnership with Hebrew Free Loan of San Francisco. She said that it can help raise the morale of people seeking fertility treatment to know that there are multiple institutions backing them up — even though in dollar terms the amounts are small compared to the costs.

“The moral support is priceless,” Solomon said. “The fertility treatment is not.”

Naor documented her fertility treatments on Facebook and Instagram. Though she was glad to be able to raise awareness about couples who have trouble conceiving, she said not all women would make the same choice she did.

“They struggle with not having privacy, and that’s ultimately what you have to sacrifice,” Naor said. “I put my uterus really out on the internet for all to see!”

Naor said that for her and her husband, they never felt they had a choice: They would need to crowdfund if they wanted to pay for a pregnancy. The plan was not to make it a public issue, she said, but to put their campaign online simply to make it easier for friends and family to donate.

But word spread, first to Spenser’s co-workers and then to people they met while on a visit to Israel funded by Honeymoon Israel, a not-for-profit that provides free trips to young Jewish and interfaith couples. (Spenser is not Jewish.) Naor says she received donations from her grandmother’s friends who were still living in Romania.

As sites like Kickstarter and GoFundMe proved, crowdfunding can be extremely efficient. Through social media posts and word of mouth, donors can attract other potential donors to the cause. However, not all prospective parents are comfortable with that level of publicity.

Naomi Less, a musician and ritual leader at a Manhattan synagogue who used IVF to have her daughter, Marlo, said she felt “very uncomfortable” with the idea of doing it publicly. Less says she met with a friend of hers, a rabbi at another synagogue, to talk about how to fundraise privately.

“How do I ask people for this?” she asked him. “Can you help coach me?”

The rabbi spoke with her about how to approach donors, and whom to seek out. At the end of the meeting, he surprised her by donating $5,000 to her efforts from his discretionary fund.

“I’m very lucky, because I’m extremely well connected in the Jewish community,” Less told the Forward in January. “I’m really privileged in that sense. There are people who do not know philanthropists and very wealthy people.”

Less received both large and small donations. One friend gave her $12,500 — the cost of one round of IVF at the clinic she was using for treatments in Syracuse, New York. She estimated that the total amount she and her husband spent on fertility treatments — including seven rounds of IVF — totaled close to $100,000.

GoFundMe has dozens of partially completed campaigns set up by couples currently on its site, with goals ranging between several hundred dollars and $38,000. While there are a few dedicated crowdfunding websites for Jewish causes, the most prominent of them, Jewcer, has yet to host an IVF campaign.

Amir Give’on, Jewcer’s founder and CEO, said that they try to host campaigns that are run by not-for-profits. (Jewcer is a registered not-for-profit.) Donations to fertility fundraising campaigns like those on GoFundMe are not tax deductible, since they do not benefit a general cause. Give’on said the company was open to hosting fertility treatment campaigns, but would thoroughly verify the identities and goals of the prospective parents beforehand.

“We would ask that a rabbi or some other community leader verifies the campaign, so that we’re not hosting a scammer,” Give’on said. “We always try to make sure the due diligence is done.”

Last June, with their campaign in full swing, Naor began IVF treatments. It took until November for a frozen embryo transfer to turn into a pregnancy.

“During all that time was crazytown,” Naor said.

Since starting on her quest to become pregnant, Naor has begun photographing families with children not born “naturally.” She said the project, called the #WorthTheWait Series, is another extension of the community she created en route to becoming a mom, made up of friends of friends and friends of grandmothers who funded her dream.

“It was some people I know I’m never going to meet ever in person, who by some connection felt compelled to help the cause,” she said. “And that’s almost too much to comprehend at times, that generosity and that gift to give to a couple that you don’t even know.”

made with love….and a whole lot of science! one little miracle arriving in July of 2018! we have waited 891 days for this moment. I am currently 8 weeks and 5 days pregnant. it’s honestly as surreal as surreal can be. *** *** as with nearly everything within the infertility journey…often good news comes with a hint of sadness or disappointment. unfortunately, this is no exception. our first ultrasound showed 1 healthy baby. we were crushed to learn that we weren’t having twins. the second embryo might have simply not implanted, or the bleeding the I experienced could have been connected….we will never know. . I have a lot I want to say on this loss. I want to talk about how hard it’s been navigating the emotions of being so, SO grateful, yet being so sad. I want to talk about how you fantasize and dream about this moment for years and years, and what actually happens when you finally are living it. I want to talk about feeling survivor’s guilt, of struggling with losing your identity of being a victim of infertility. . but for this moment in time, I want to celebrate that there’s a beating heart of another human being inside me right now. . a product of science and technology. a product of support, encouragement, and hope from family, friends, and strangers. a product of dedication and knowledge from dr. kolb, my nurse natalie, and the entire medical staff at my clinic. . of course there are always more hurdles to overcome. this journey is far from over, and we’re not totally in clear by any means. at 12 weeks the risk of miscarrying decreases exponentially, so we have a bit more to go. but every day is one step closer to meeting this baby of ours….and we can’t wait to tell them their story. #worththewait