Ruth Bader Ginsburg Is Staying On The Bench, As Long As She Has ‘Full Steam’ 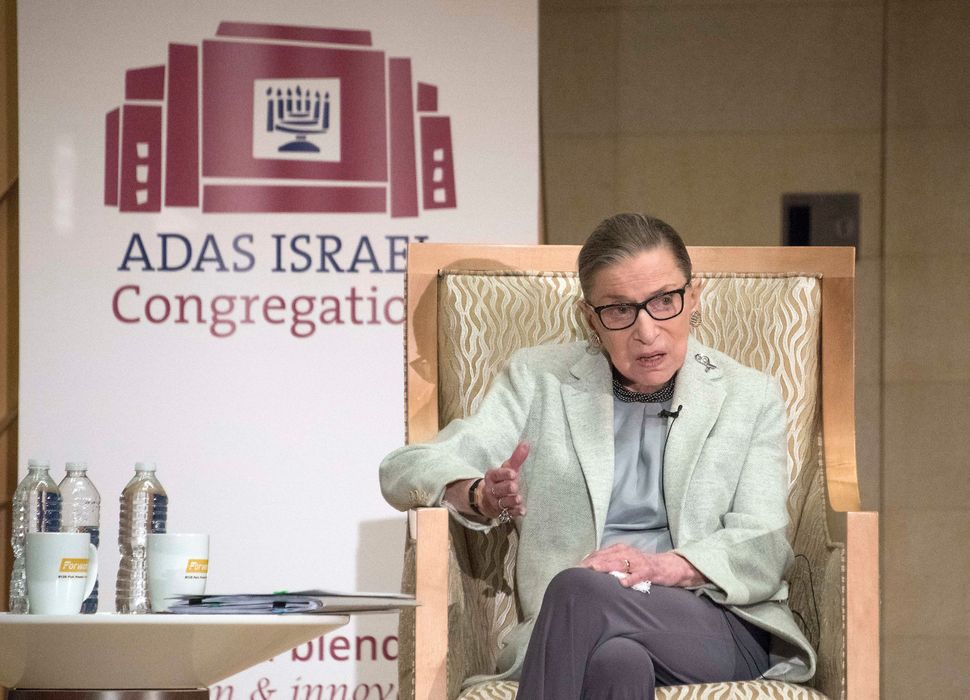 A sigh of relief was heard Thursday night across a packed synagogue sanctuary in Washington as Justice Ruth Bader Ginsburg reassured concerned liberals that she is not retiring from the bench.

“Many people have asked me when are you going to step down,” she acknowledged, as a member of the audience shouted out “never.” Ginsburg, who will turn 85 in March, noted that she is already the longest-sitting Jewish Supreme Court justice and that she has served longer than Justice Louis Brandeis. “So I’m just candid, and I say: ‘As long as I can do the job full steam, I will be here.’”

The spontaneous burst of cheers from the pews made clear how concerned many in the Jewish community are at the prospect of Ginsburg stepping down before 2020, thus allowing Donald Trump to nominate a conservative justice who would decisively tip the court’s balance.

Ruth Bader Ginsburg: ‘I’m Staying On The Bench’ from The Forward on Vimeo.

Speaking to the Forward’s editor-in-chief, Jane Eisner, at Adas Israel synagogue, Ginsburg — or RBG, as she is commonly known by her crowd of admirers (many of whom are less than half her age) — shared her sober account of the strides already made by the American justice system to address gender inequality, and of the steps that still need to be taken to ensure real equality.

Drawing on her own experience, both as a jurist and as a woman in a male-dominated field, Ginsburg set a challenge for legislators – passage of the Equal Rights Amendment, which would enshrine in the Constitution the concept of gender equality.

I have three granddaughters. I would like them to see in the Constitution a statement that men and women are persons of equal citizenship stature.

The Amendment was proposed four decades ago, but failed to gain the approval of a sufficient number of states to have the force of law. “A very large part of becoming a more perfect union is to embrace more and more people,” she added.

Asked about the status of the struggle for equal gender rights, Ginsburg pulled out a notebook from her “I Dissent” tote bag and read a passage from Anne Frank’s diary, in which the 15-year-old Anne asked why “women are thought to be inferior to men.”

Ginsburg recalled being an only woman in law faculty meetings before becoming a judge, where “I would say something and there was silence. Fifteen minutes later a man would say exactly what I said and everyone would say ‘a good idea.’” Her struggle, she noted, was to make those sitting on the bench understand that gender discrimination is no different from racial discrimination, although it was seen at the time as favoring the women.

She quoted with approval Justice William Brennan, who said that “this pedestal that women are expected to stand on, more often than not, turns out to be a cage,” concluding that “that was our mission, to get judges to understand.”

Later she’d take on the custom of holding Supreme Court hearings during the Jewish High Holidays. Here, too, she was initially rebuffed, being told that the court meets on Good Friday, too. But after raising the issue of Jewish attorneys who cannot argue their cases, the court changed its calendar.

In an engrossing conversation that lasted well over an hour, Ginsburg captured the crowd with a mix of openness, self-deprecating humor, and a clear sense of devotion to her mission. She spoke of her days as a student at Cornell, where there was only one woman for every four men, joking, “‘If you couldn’t find a man at Cornell, you were hopeless,” and sharing memories of her late husband, who “always made me feel that I was better than I thought I was.”

The interview was punctuated with questions from Forward readers. One of them, 9-year-old Carly Rae Brown, wrote to the Forward to ask whether Eisner could tell Ginsburg how inspiring her example is and asking Ginsburg’s advice on becoming a judge. Ginsburg’s suggestion was that she “take your schoolwork seriously, become a good reader,” and take action to make her community a little better.

And while she steered clear of discussing any current political issue, Ginsburg may have found some common ground with political figures that she was not aware of. Asked by Eisner to name her favorite bagel flavor, she chose New York poppyseed. Just like Barack Obama and Benjamin Netanyahu!

Ruth Bader Ginsburg Is Staying On The Bench, As Long As She Has ‘Full Steam’