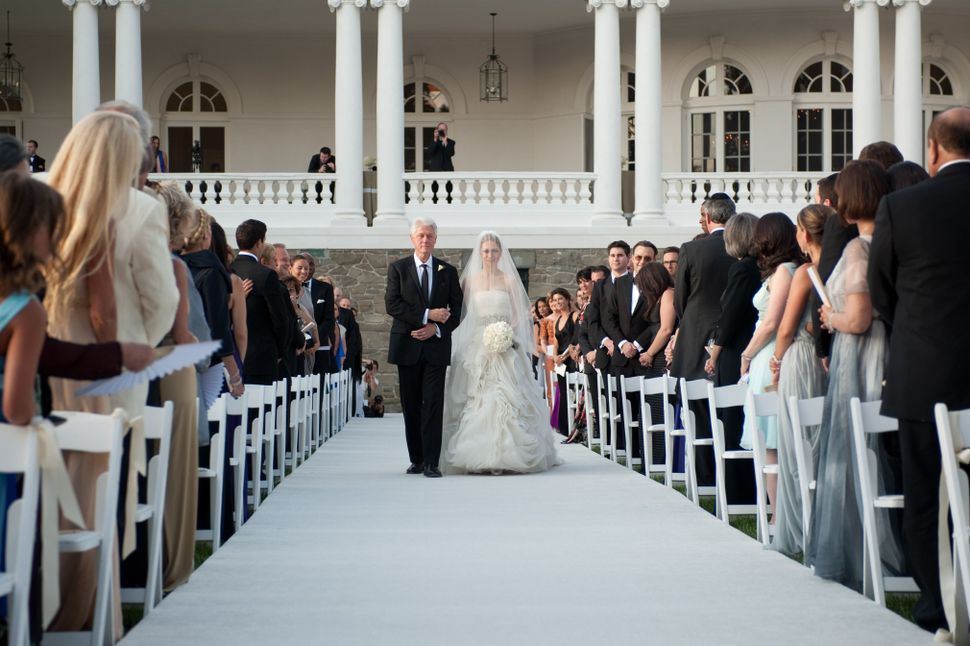 The year after Rabbi Jason Miller graduated from rabbinical school, he skipped the wedding of his first cousin, who was marrying a non-Jew. He regretted it immediately.

“It caused a significant fissure in our relationship,” Miller told the Forward.

At the time, Miller thought he was abiding by an ironclad rule that bound all rabbis who serve Conservative Judaism, the liberal denomination that adheres to some aspects of traditional Jewish law.

“If it was found out that we even attended an intermarriage, meaning standing in the back of the venue, wearing a Groucho Marx disguise,” Miller said, “we would be kicked out of the Rabbinical Assembly,” Conservative Judaism’s rabbinical association.

In January, the R.A. admitted that it had never actually enforced the ban on attending intermarriages. Now, some rabbis who abided by the rule, some of whom are still mending family relationships damaged by their decisions, are furious.

“Had I known this wasn’t a real policy I would have been with my family in a heartbeat,” said a Conservative rabbi who missed both of his siblings’ weddings and asked not to be named because of the personal nature of the issue. “To this day I regret that I put this policy of this organization over my family and my relationships. And if it weren’t for the fact that I was a younger and newer colleague at that time and I had a real fear for my livelihood, I would never have complied.”

Being kicked out of the R.A. is no joke for a Conservative rabbi. The R.A. controls the job market and the rabbis’ pension plan. Outside of it, a career as a pulpit rabbi in a Conservative synagogue is next to impossible. The R.A.’s rules, called the Standards of Rabbinic Practice, are based in Jewish law but function more as membership criteria for the organization. While matters of Jewish law can be argued among rabbis, the Standards of Rabbinic Practice are ostensibly absolute: Break them and you’re out. The R.A. does often kick out rabbis who break some of the Standards, including the ban on performing intermarriages.

The original intent of the attendance ban was to keep Conservative rabbis from sanctioning intermarriage by virtue of their presence. While intermarriage is condoned by American Judaism’s other liberal movements, the Conservative movement still holds that it is forbidden by Jewish law.

In an email in January, the R.A.’s executive vice president, Rabbi Julie Schonfeld, said the decision to disclose that the rule hadn’t been enforced was difficult. “The R.A. struggles mightily with this,” Schonfeld said. “The commission was deeply pained by the fact that a recognition that the provision on attendance had fallen into desuetude would cause distress to the many rabbis who, out of fidelity to the standard, did not attend a family wedding but yet decided that it was the right choice to make at this time.”

Following rules is deeply embedded in the ethos of Conservative Judaism, which emphasizes the relevance of Jewish law. “I live constantly under rules that are unenforceable,” said Rabbi Jonathan Kohn, an Illinois-based Conservative rabbi.

“As Conservative rabbis, law means something to us,” said Rabbi Aaron Starr, who leads a Conservative synagogue in Michigan. “Rules matter. I honor Halacha. I accept Halacha. And as a result I’m a rule follower.”

The rule against attending intermarriages, however, has been publicly flouted even by the movement’s leaders. In 2010, the chancellor of the Jewish Theological Seminary, the flagship Conservative rabbinical school, attended the wedding of Chelsea Clinton and her Jewish husband, Marc Mezvinsky. Though the chancellor, Arnold M. Eisen, is not a rabbi, and though he said he had skipped the ceremony itself, his decision to attend the celebration set off a wide-ranging debate within Conservative circles.

Top Conservative rabbis, including members of the R.A.’s law committee, also admit openly to having broken the rule. But other rabbis — often younger ones, at earlier stages in their career — have abided by it, feeling as if they had no choice, sometimes at great personal expense.

When Miller’s cousin intermarried in 2006, he felt he could not attend. “The Rabbinical Association is my trade union,” Miller said. “My pension is through them. So when they say if you do this you will be expelled, which means you’ll lose your job, you’ll lose your pension — it’s a significant statement that they make.”

After he recognized that skipping the 2006 wedding had been a mistake, Miller said, he chose to attend a close friend’s intermarriage years later. “There were no lighting strikes,” he said. “No one called me about it.”

The Conservative rabbi who asked not to be named said that his sister had eloped in part because he had told her he wouldn’t be able to attend her wedding. He later skipped his brother’s wedding ceremony but attended the celebration afterward. The rabbi said he never knew that the policy wasn’t enforced.

“Colleagues stewed and sweated and fretted and put relationships with family on the line, and nary word one from the R.A.,” the rabbi said. “There was never any type of supportive statement in advance saying, ‘We understand this is difficult and that colleagues who follow the call of their conscience need not worry for their livelihoods.’”

That rabbi said that the R.A. should have made some effort to tell its members years ago that the rule wasn’t being enforced. He said that it appears as though knowledge of the ban was shared unevenly. “There certainly seems to be an inside/outside dichotomy here,” he said.

Intermarriage is a widespread phenomenon among American Jews, but its prevalence varies by denomination. The Pew Research Center found in 2013 that 44% of married Jews had a non-Jewish spouse. Among married Conservative Jews, 73% were married to a Jew.

“The argument can be made that it is no longer a part of the standard,” said the report, written by some of Conservative Judaism’s leading rabbis. “We find that the prohibition on attendance has fallen into disuse from the time of its promulgation in the 1970s until the present time.” The report recommended that the R.A.’s legal board decide whether it should be officially withdrawn.

It’s unclear when the legal board will take up the issue. For now, the ban is still officially in place.

The R.A.’s executive committee emailed the legal board in January, asking it to “review the attendance question in light of the fact that the practice has long fallen into desuetude.”