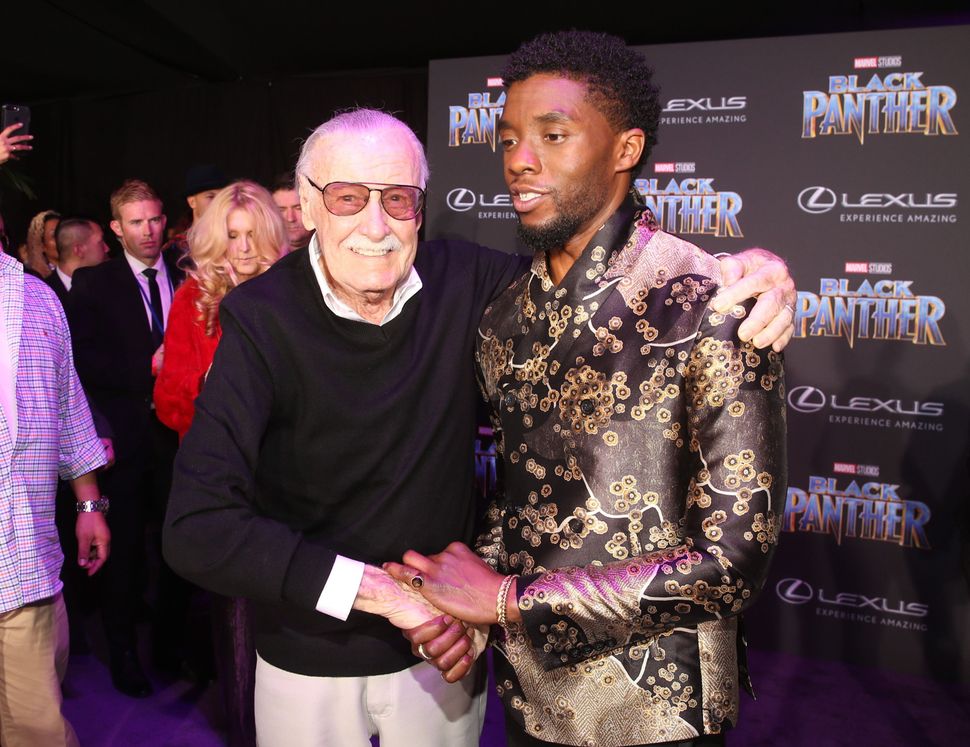 (JTA and Hollywood assumptions about race.

But some fans might not realize that the original Black Panther character was actually created by two white Jews.

The superhero was the brainchild of writer Stan Lee (born Stanley Lieber) and artist Jack Kirby (born Jacob Kurtzberg), who were already veterans of the comic book industry when they started working together at Marvel at the dawn of the 1960s. The first comic book series they produced in tandem was The Fantastic Four in 1961, but they would go on to create a slew of beloved superhero characters, from the Hulk to Iron Man to the X-Men.

Lee and Kirby’s Black Panther character debuted in July of 1966, in a Fantastic Four comic strip (he would get his own series later in the ’70s). The leader of the fictional African country of Wakanda was the first black superhero featured in a mainstream comic book. In addition to having supernatural physical abilities (granted in part by a heart-shaped herb he eats), Black Panther is a scientist with a degree from Oxford University. In the Marvel universe, Wakanda, which resisted Western colonization, is also the most technologically advanced nation on earth — a concept meant to shatter stereotypes about Africa.

Besides being a pop culture milestone, Black Panther’s debut came at a crucial juncture in black-Jewish relations. The years after World War II and up to about 1966 (yes, that exact year, as explained below) have been referred to as a “golden age” in the relationship between the two groups. American Jews, who empathized with blacks as they themselves struggled to fit into white American society before and after the war, participated in the civil rights movement to an outsized extent, and Martin Luther King, Jr., often praised them for their activism.

Jews “demonstrated their commitment to the principle of tolerance and brotherhood not only in the form of sizable contributions, but in many other tangible ways, and often at great personal sacrifice,” King said in 1965.

However, relations strained over time, as Jews found their way into the upper echelons of America, while blacks remained stifled in comparison, even after the passage of multiple civil rights bills in the ’60s. In October of 1966, Huey Newton and Bobby Seale formed the Black Panther Party (which did not take its name from the character), and kickstarted the Black Power movement, which scrutinized the ways that any whites — Jews included — interacted with blacks.

The aftermath of Israel’s victory in the 1967 Six-Day War subtly added to the groups’ separation. After Israel repelled attacks from many of its Middle Eastern neighbors, it took control of the Arabs living in the Gaza Strip, the Sinai peninsula and territory known as the West Bank. This was a turning point in the way many groups — including blacks, who sympathized with other groups they considered oppressed — viewed Israel, and in turn some American Jews. In their eyes, Israel became another unjust colonial regime. Jews felt betrayed, as did blacks when some major Jewish groups began to oppose affirmative action.

So perhaps “Black Panther” represents an opportunity for healing. The film’s creators and a number of black writers have been praising Lee and Kirby for reaching out to a non-white audiences and imagining an empowered African culture free from colonialism. Coogler called them “amazing” in an interview last week. Reginald Hudlin, who over a decade ago wrote a Black Panther TV series, called the duo’s character “perfect.” Stephen Bush, writing in the New Statesman, called them “genius.”

As for Lee, who is now 95, he has been rooting for the Black Panther film for a while.

So perhaps it’s time to celebrate the message of reconciliation that “Black Panther” represents, just like Kirby — who passed away in 1994 — might have done. In an interview with The Hollywood Reporter, Kirby’s family compared him to Bernie Sanders, saying that he would have been delighted to see the character empower such a wide audience.

“A black superhero with both amazing mental as well as physical powers, from a technologically advanced society in Africa, sends as strong a message now as it did over 50 years ago. Today, my grandfather’s message will reach tens of millions of people of all races and nationalities, a concept my grandfather could never have conceived of,” Kirby’s granddaughter Jillian said in a separate interview cited by THR.